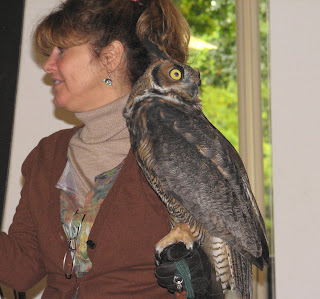 Hartford Audubon is celebrating its 100th anniversary. Each year they offer numerous free field trips, along with a variety of wildlife programs. On October 5th, 2008 Hartford Audubon held a Family Field Day event at Northwest Park in Windsor, CT. This included information booths, guided birdwatching trips around the park, and live birds of prey demonstrations. (Clicking on any of the photos in this post will provide you with a larger image with more detail) .

Teresa Kramer, from Canton Raptor Care , was one of the speakers at the family day event. She is pictured above with an injured Great Horned Owl who had lost one of its eyes. She noted that the owl will sometimes look out the window and find other birds of prey in the yard or flying by. Teresa also showed us an American Kestrel, Red-tailed Hawk, and another smaller owl (Screech?). 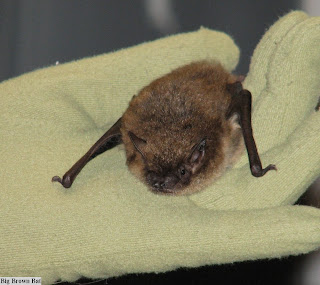 Gerri Griswold, aka Bat Lady, of The White Memorial Conservation Center in Litchfield, Connecticut, was at the event to educate people about the importance of bats and to dispel some of the myths about them. According to her, the stories about bats getting in your hair and having rabies is greatly exaggerated. Many of the bats in North America and around the world are endangered. 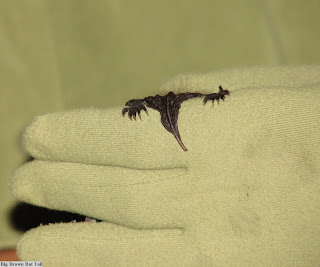 Here is a photo of the tail and feet of the Big Brown Bat, one of eight species of bats that can be found in Connecticut.
The event was well attended, despite some early rain showers. Northwest Park has been known to have some species that are uncommon to Connecticut, including Blue Grosbeaks, Grasshopper Sparrows. Orchard Orioles nest here every summer. On this day, Lincoln's Sparrow, Winter Wren, Tennessee Warbler, Black-throated Blue Warblers and Swainson's Thrush were among the species found during the bird walks.
Falconry Demonstration: "Skyhunters In Flight" 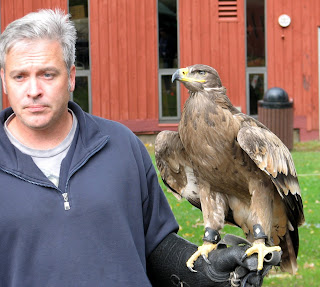 My favorite part of the event had to be The Skyhunters In Flight Program presented by Brian Bradley. I've never had the chance to see a live falconry demonstration before. Watching it in a country setting on a Fall day made it even more dramatic!
-
I'll make a little guessing game out of this. You can test yourself by identifying the birds in each of the following photos or you can just click on the link for the answer. 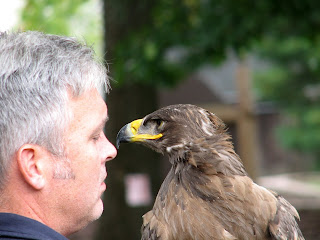 #1) The first bird seen face to face with Brian in the above photo is a: click here for answer.
-
Brian explained the relationship between the falconer and the birds they use to hunt with. The falconer makes sure they are always fed, exercised and kept healthy. In turn, the birds of prey will capture live animals and return them to the falconer. It's amazing that they don't just fly off, although that does happen sometimes. 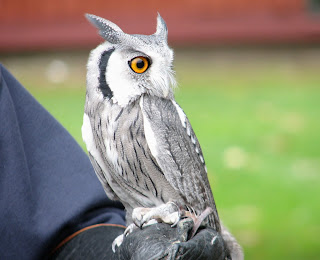 #2) The common name for the owl pictured above is: click here for answer. 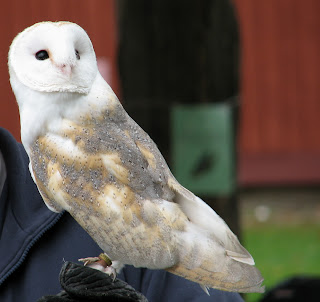 #3) This owl is known for it's heart-shaped face and is native to North America: click here for answer. 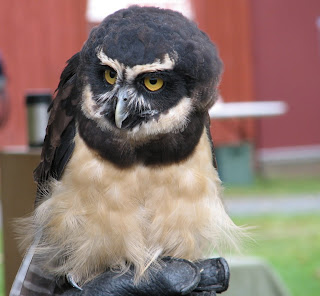 #4) This bird can be found in parts of South America and certainly does not need glasses: click here for answer. 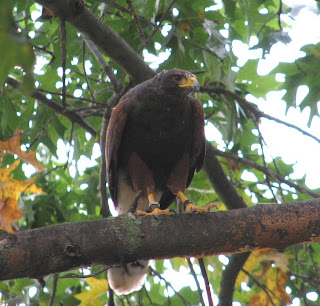 This photo is of a hawk that can be found in parts of Northwestern United States. It flew into one of the park trees during the demonstration. It is awaiting the signal from Brian to go after the artificial bait (fake rabbit). The hawk had to work a little before it was able to capture the bait but in the end it was mission accomplished. 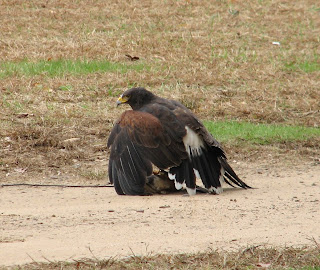 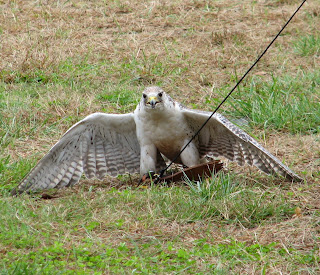 #6) Name that bird! click here for answer.
click to play flight video
Here is a video of it flying from one of the barn rooftops on it's way to capture its intended target. 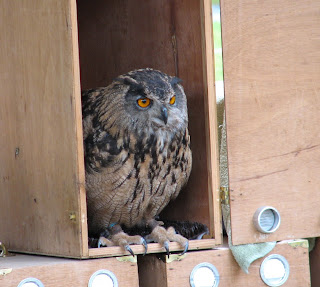 #7) This is the final entry. Do you know the name of this chunky little owl?
It is not native to North America.- Click here for answer.
click to play flight video
Here it is responding to Brian's clicking call and being rewarded for following the command properly.
-
So how did you do? Did you guess them all?
-
By the end of the day, I had too many photos and videos to fit into this post. If you click here: You can see many more photos of the day's events taken by Mona Cavallero. There is also an article from the Hartford Courant about Hartford Audubon's 100th anniversary and an article about the history of the organization by Helen C. Beckwith.
-
Julie Zickefoose is scheduled to appear at the next Hartford Audubon wildlife Series event on Tuesday, October 21st: Click here for details.
Posted by Larry at 5:20:00 PM

WOW Larry- what a cool day. I've never seen a falconry demonstration. The only guesses I got right were the barn owl and the Harris' Hawk. Those were some realy cool birds.

Thanks for the comment! I hope to make a career out of animation one day.

And these are fantastic photos of birds.. I love the owls, especially the barn owl. I might draw some later!

Heavens Larry! I am embarrassed to say that I only knew ONE for sure...lol! What a great day it must have been and what great photos you got!

Larry, looks like a fun day and a very informational post! I get to see Harris Hawks down here quite frequently but it never gets old. I am amazed every time! What a beauty that barn owl is!

Lynne& Jayne-The only one I would have known without looking it up was the Barn Owl.

ned-You're welcome.-Let me know when you complete it and I'll link to it if you'd like.

Those bats are awesome. I am glad they eat mosquitoes.

Christine-I am too but I wish they'd eat more.

Awesome awesome awesome! I've always loved these kinds of displays (I'll see one at our local Renn Faire next month, actually.) I wish I had the resources to get into falconry! Raising game birds was fun (did it for years,) but give me raptors ANY day! Thanks for sharing the videos, too. Love watching them fly!

Hi Larry,
I did pretty poorly also (only got the Barn Owl correct). That was so neat to see all those different birds, but my favorite picture was of the bat's feet and tail hanging over the "Bat Lady's" fingers--too cute!
So are you going to hear Julie speak in person?

Lana-Thanks for the enthusiastic seal of approval! -I can see why someone would become interested in such a hobby.It's amazing the connection with the birds that the falconer has.

ruthiej-I thought that the feet and tail were interesting looking.I'm glad you appreciated it because it was hard to choose which photos to include.-I'm not sure whether or not I'll be able to makeit to Julie's appearance.-I would like to though.

I’ve never seen a Falconry display, either…but would find it fascinating. Who knew they use owls?! And didn’t the Barn Owl have a neat feather-pattern? He almost looked covered in foam…until I enlarged the photo.

I love your work here… I’ll be back.

So so I guess. But hey that was fun! Thanks

I'm in thew wrong country to be able to id those birds, but they're a wonderful selection of photos

Beverly-Thanks-True-I didn't know that owls could be involved with falconry either.-The pictures do show better detail when enlarged.

troutbirder-I didn't expect anyone to get them all but I just wanted to add a little twist with the photos.

crafty green poet-Don't feel bad-It wouldn't matter what country I was in-I still wouldn't have known most of them if I hadn't seen the show.-At least I gave the links though.

I enjoyed reading your blog entry on the Hartford Audubon Family Field Day event. I was sorry to miss the event as I know both Teresa Kramer and Brian Bradley and greatly respect their knowledge of raptors.

I'm pleased that people got a chance to see a falconry demonstration by a real falconer like Brian instead of the people who so often appear at Renaissance festivals and other events who try to pass themselves off as real falconers yet have never actually flown a raptor on wild quarry.

It's also good to know that the public was made aware of the amount of work that goes into the sport of falconry, how much falconers care for their birds, and the important contributions that falconers have made to the conservation of birds of prey (in particular the peregrine falcon).

Jon-Sorry I did not reply to this earlier but it did not show up in my e-mail.-Thanks for your comments-I was very impressed by the demonstrations and the work that goes into it.