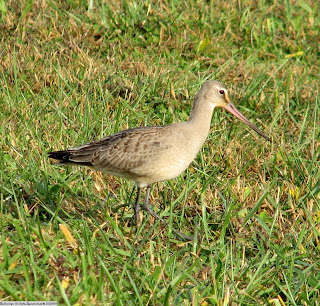 I took a ride to Hammonasset State Park today hoping to see the Hudsonian Godwit that has been reported there for the last week. It was located in the fields near the West Beach parking lot. There were several people there photographing the bird from their car windows. 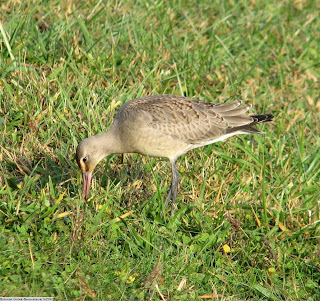 This was a new species for me so I took the time to read a little about it. According to All About Birds, the Hudsonian Godwit breeds in the Arctic and winters in South America. They migrate through the Great Plains in the Spring and along the Atlantic Coast in the Fall. It is a large shorebird that has a long, bi-colored bill that is slightly upturned. 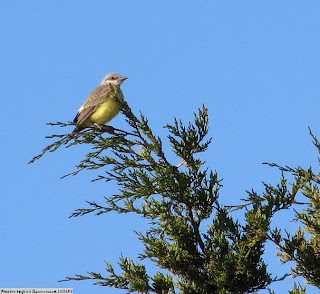 I had an added bonus as a Western Kingbird was also reported at Hammonasset yesterday by Ron Pelletier. I had fun crawling through the sand trying to sneak up on it for a photo but wasn't able to get very close. It was doing its flycatching thing and moving around to different areas near the Meig's Point area of the park. It was noted that this particular bird doesn't seem to have much of a tail.
click to play
The godwit was very tolerant of the presence of people. Here is some video footage I was able to take with my camera.
Posted by Larry at 2:06:00 PM

Hi Larry,
It's cool to be able to get movie, but I still do prefer the challenge of getting a shot!!! I love these ones and also the one of the western kingbird! Well done on this bonus!

Hi Larry,
Long time! I stopped by Hammonasset on the way to my mother's place today and saw this bird, too. Lots of photographers were there. Maybe you were one of them. I just got home and came online to search for info about the Hudsonian Godwit and Brownstone Blog showed up in the search. Your pictures are terrific. I haven't looked at mine yet. Thanks for sharing.
Lin

Chris-Thanks-It's easier to get quality video some times than it is a good photo.A new camera and photography lessons are in order for me some day.

Hi Lin-I was there about 9-11am. At first I didn't want to interrupt the other photographers but after seeing how cooperative the bird was I was able to get fairly close.

What an interesting little bird! Just saying the name makes you smile!

I think we left the house around 9, drove to Silver Sands - not much there, so we went on to Hammonasset and were probably there from 11-1 walking some trails. Gorgeous day. We saw the godwit, watched some ruby and golden crowned kinglets, yellow rumped warblers galore, and all the standard egrets, gulls, etc. Nice day.

Great sighting with the godwit. What a cool looking bird!

the godwit seems to be very happy being such a centre of attention, handsome bird too

Wonderful capture for you on this day! I have only seen one godwit, I think it was the marbled, at the Bear River Migratory Bird refuge in Utah. Looks like that kingbird molted his tail or almost got caught and escaped without it! I hope it grows back in time for him to fly south for the winter!

How cool! Thanks for sharing. :)

Hi Larry,
We just had a Hudsonian Godwit hanging out down at Blackwater NWR. I love the pink on the bill! Nice pictures!

Jayne-The official bird of of churchgoers!

Kathiebirds-The bird is still there and hasn't been taken by a hawk yet but I wonder how far it can fly.

Thanks for everyone elses comments too.

Great birds Larry...Nice to catch up with you and your blog..like the video..that long bill on the godwit looks like it comes in handy..

Very nice birds. i was looking for these birds. you can visit my site if you need more birds pictures.