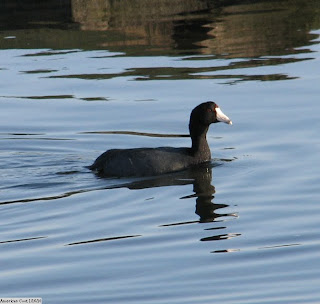 I knew that driving around the state for the entire day trying to add birds to your list can be exhausting but I decided that it would be best to give my max effort early on so that I could relax a little towards the end of the month. I'm at 89 species now and hope to exceed 100. It won't be easy but I should be able to slow my pace a little and select birding areas that are closer to home for the remainder of the month.
-
The American Coot photo was taken at Birdseye Boat Ramp in Stratford this past Saturday. I spent the day at the western shoreline with a few other birders who are also working on their Big January lists. One of our first stops was at Sherwood Island State Park. We spotted 3 Red-breasted Nuthatches upon entering the park. This Red-tailed Hawk was posing in a tree as we entered the beach area. Maybe it's compiling a people list for the month of January. We scanned the water and spotted numerous Long-tailed Ducks gathered together in the distance. 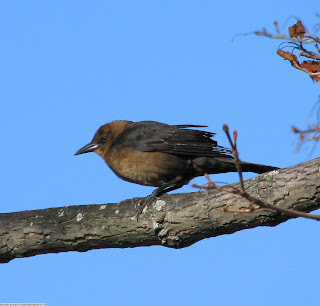 We saw a small flock of Boat-tailed Grackles gathered in a small urban park in Stratford. The female is easier to identify with its bronze coloring.
-
The weather was terrific on Saturday. It was clear and sunny with temperatures in the upper 40's. You can't expect much better than that for a day in the middle of January in the state of Connecticut. I've been using Meopta Meostar 8x42 binoculars binoculars for over a month now. They've performed really well in the dismal weather conditions we've had during that time but it was great to finally use them on a cloudless day. 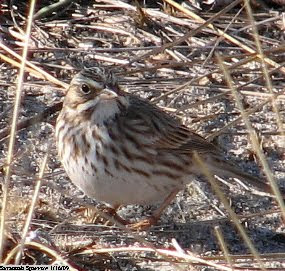 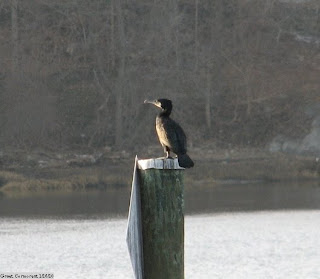 The Great Cormorant like the one in this photo taken toward the end of the trip is the more common of the two cormorant species to be found in Connecticut during January. it has white showing near the base of the bill on the side of its face. We were also able to find 2 Double-crested Cormorants.
I didn't get home until dark on Saturday and by Sunday I needed a break from the hectic birding pace of the previous day. I took a ride to a place along the Farmington River where a male Harlequin Duck had been reported for several days in a row. After an hour of looking around we were finally able to locate the Harlequin Duck next to a Common Merganser. That was a nice addition to my January list and a lifer as well.
click to play
Notice how this coot takes a quick break to do some preening before continuing on with its search for food. I hope everyone else is coming along well with their January lists. I'll look forward to reading your posts soon.
Posted by Larry at 6:09:00 PM

My 99 year old patient with a broken hip hopes she has enough gas to reach 100 too...
You have some interesting birds on your list. I found no Cormorants this year, but have added 3 lifers to my list for the month. You never know what you might find.

Coots can be so funny. We get hundreds at Fontainebleau State Park (on Lake Pontchartrain) during the winter. I have to chuckle, watching them run across the water, trying to take off.
I love cormorants, too. Love to watch them swimming & drying. Too many people don't give them much credit, but I think they're really cool.

Hi Larry,
Well done on the harlequin.. I love this bird a lot, it is so wonderful, has a so nice colors patterns! I hope you will reach 100 but I'm already amazed that you got so many species!

Larry, I'm only marginally ahead of you at the moment but I'm sure we will both make the 'ton' before the month is out. FAB.

You are really doing great, love the pictures, I have to check out some of those spots myself

Go, Larry, go Larry!
We are with you - 100 is the goal with a big weekend at Ocean City Inlet planned for the weekend.

Good luck, can't wait to see how you do!

Ruth-That's the best thing about doing this sort of thing. You end up seeing birds that you might not haveotherwise seen. I'd trade my 100 species for a 100 years of life any day.

Lana-We don't see all that many coots in CT. There are plenty of cormorants though. They are both interesting species.

Chris-Yes they are beautiful ducks but the one I saw wasn't at its peak colors-still nice though.

forestal-There are a couple of Hartford Audubon trips that cover the western shore.The birding there is very good in that part of the state.

Warren and Lisa-Thanks for the encouragement. I'd love to hit the 100 by this weekend. Good luck in your quest and don't forget to celebrate at the 100 mark!

Larry, well done! I am stuck at 107 for now. I haven't been out birding all week due to illness once again. I hope to go out this weekend, at least on one day and next weekend we are taking a trip up to Phoenix which should afford me an opportunity to see some different birds, but I won't have much time for it as we have tickets to see a performance of Riverdance. But I am going to try to squeeze in some birding. We shall see! I'd like to beat my own last year's count.

I did not know that boat-tailed grackles were in CT now. That is amazing!

Good shots all and what a fun, though exhausting, day of birding!

Keep at it, you can do it! You are doing better than me. School has me busy, but I get out when I can. Great photos!

Have you seen Red Head? I spotted a huge group on water at Black Rock, Bridgeport yesterday. Not a good photo but they were very distant.
http://www.flickr.com/photos/brushbin/4310816406/sizes/l/

I have been informed by local birding authorities that the group of ducks I saw are mixed scaup and not red head. Funny how fading light can alter ones perceptions. As I replied I am only a casual observer and they, and you, are the serious birders!

SteadyJohn-Sorry I missed this comment previously.I did get to see scaup and canvasbacks but no redhead although there was a photo of Lucille Ball in one of the stores I stopped at.