From The Berkshires To The Backyard 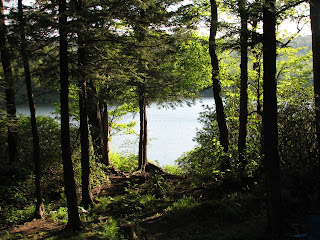 I spent a few days up in Berkshires with my father and cousin as part of a Spring fishing trip. This has been an annual tradition for over 30 years. When we first started this tradition my father had to keep an eye on me as I was just a young teen. Now that he is approaching 80 it's me that looks out for him.
-
The view is of South Pond as seen from our cabin porch. We caught some nice Rainbow Trout in nearby North Pond after the friendly locals gave us a few fishing tips. 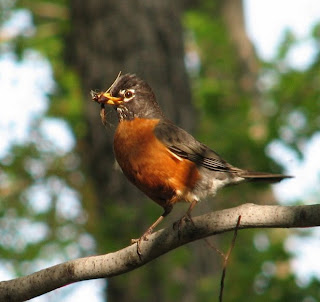 I didn't spend a lot of time birding during the trip but did bring my camera and binoculars while fishing or hiking. I enjoyed watching this American Robin as it tended to a nest behid our cabin. One of the birds that I heard most often in the area was the Black-throated blue Warbler. They stayed high in the trees so I rarely caught a glimpse of them. I spotted Blue-headed Vireos, a Barred Owl, and Purple Finches, right within the campground. I hadn't seen a Purple Finch for so long that it took me a minute before I realized that I was seeing Purple Finches and not House Finches. 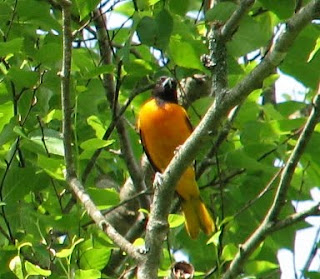 When I returned home I visited a few of my favorite local birding spots. There has been a lot Baltimore Orioles around but I haven't been able to catch one at eye level.
click to play
I got a nice look at this Scarlet Tanager as it made what I call its Chick-burr call. I wish the robin in the background would have toned it down for a few seconds but that's just a robin being a robin. 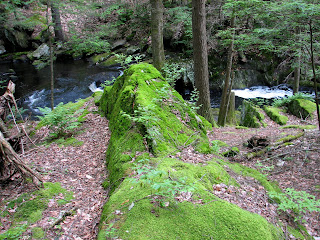 This is a picture taken at a small nature preserve in East Hampton. I find the area so visually appealing but I was hoping that it would have a greater variety of bird species. The bottom line is that the birds probably don't share my appreciation of natural beauty. they're more interested in what's in it for them in terms of food and habitat.

click to play
I have found that it's a good place to find Black-throated Green Warbler and Acadian Flycatchers like the one seen in this video. It was nice to actually see the Acadian Flycatcher this time. Usually, I only hear them or catch a brief glimpse of one as it flies from one tree to another. 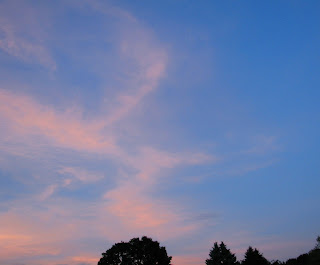 As my vacation time came towards the end I spent some time just sitting and relaxing in my backyard watching the sunset. As evening approaches, I enjoy watching the Chimney Swifts as they dart and twitter across the sky. 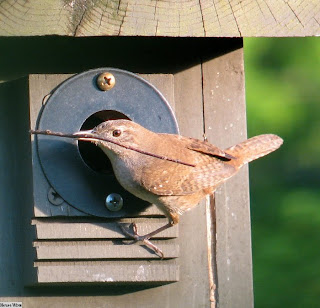 I was happy to see that a House Wren decided to make use of our nestbox again. They migrate to southern United States or Mexico for the winter.
-
As I was watching the wren busy at work an amusing thought occurred to me. While we were up in the Berkshires gathering firewood and and staying in a small log cabin, this little bird was busy gathering sticks in my backyard to put in this wooden nestbox for his family.
Posted by Larry at 6:26:00 PM

hee hee..that robin sure was noisy..but i did hear the familiar sound of the tanager.
Nice get away for you and dad..amazing how time changes things.
That wren in the last photo looks like it is a wooden carving...cool

That Robin didn't want to be outdone by the tanager.I'm glad that we've both had the opportunity to see how time changes things. The wren does look a little like a carved wooden figure.

Such beautiful areas up your way. I need to see hills (& even mountains) again! Very cool on the owl, of course.

Lana-I really didn't use my camera much while up in the Berkshires but there were some breathtaking views up that way.

What a lot of adventures you have been having! How nice to still be fishing with your father! Love the little wren.

Excellent. My daughter recently moved to that area, and it is a great pleasure to visit.

The Berkshires and Litchfield Hills
are beauutiful. I was up there last January.

Wow larry, this is a very nice post. First it is nice that you are able to keep tradition for a so long period of time, but also that you can enjoy bird life around it... Excellent!

Larry, it sounds like you had a wonderful vacation - it's good the keep old traditions going. Someone said a tanager is a robin with a cold - souncs true in your video - and he continued, a rose-breasted grosbeak a robin who went to singing school :-)

Kathiebirds-It is a well behaved wren. The once a year fishing trip has really meant a lot to us over the years.

Harold-It sounds like your daughter has made an excellent choice.

Chris-The bird thing has only entered the equation over the last 5 years since I was a late starter in the birding category.

Hilke-I find it ineresting the way people come up with ways to describe things like the taste of wine or the songs of birds. Some of the descriptions I can relate to and others not so much. The first time I heard an RB Grosbeak I did think it was a robin. Boy was I suprised when I decided to take a second look!