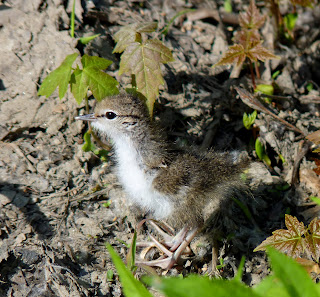 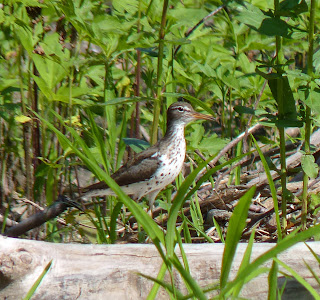 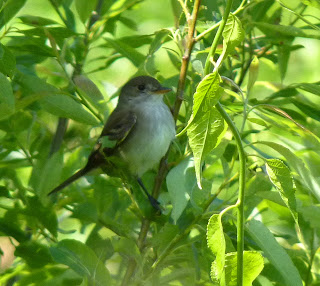 There were several Empidonax flycatchers around. I've heard that the best way to tell a Willow Flycatcher from an Alder is by its call so I videotaped several of the calls I heard. One of the calls could clearly be identified as a Willow Flycatcher. The other calls I recorded were different from what I found on the Internet so I can't be sure of their identity. The bird in this photo shows very little eye ring. I'm guessing it's probably a willow.
Posted by Larry at 8:14:00 PM

I have been trying to find some Killdeer fledglings but the little Sandpiper is just as cute. Flycatchers fall in another of my very confusing birds categories along with shorebirds, gulls and greenish-yellowish warblers.

Oh, Oh, Oh, Love that fuzzy baby! I did not know all that stuff about spotties. I saw one recently up at Quinnebaug Pond/lake/Wauregan Reservoir. I would love to go birding with you sometime Larry! I am in CT right now but headed home tonight. Perhaps next time?

Cute little fuzz ball and great info on the Sandpipers.

I prefer it when different species have an obvious unique mark to tell them apart from others.

The fledgling's so adorable! We're inundated by cardinal, woodpecker and blue jay babies right now. I love this time of year. :)