Canada Geese Put A Halt To My Camping Plans 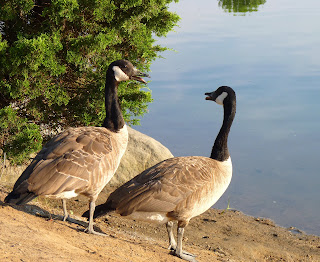 I recently decided to camp overnight at Hammonasset Beach State Park. Normally I would prefer a campground in a tranquil, wooded setting but I thought I would give hammo a try since the birding is always good there. My plan was to get an early start so that I could do some birding before the weekend beach crowd arrived. 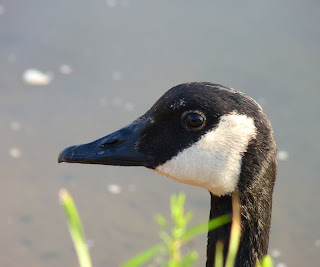 I arrived at my site (1) on Beach Road and the first thing I noticed was a flock of Canada Geese hanging out right about where I would be pitching my tent. I took a few photos of them but then realized that they had thoroughly blanketed the area with goose droppings. There may be some that might consider this an opportunity to add an organic touch to their camping but the idea of kneeling down to set up my tent on a pile of goose droppings wasn't appealing to me, especially on a 97 degree day. I asked the park office if I could borrow a rake. They said maintenance would come down to clean it up but by this time it was already getting late. 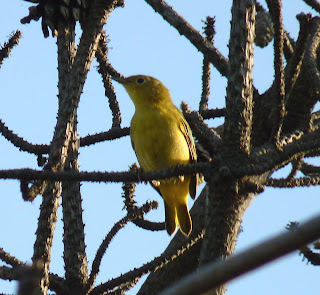 I spent a little time wandering around the grounds looking for birds. I saw Osprey, Red-winged Blackbirds, terns, and a Barn Swallow which was temporarily trapped in the men's room. I was confused when I saw the Yellow Warbler (above). I know that a yellow Warbler is basically the only warbler that's all yellow but I've never noticed one with an eye ring. Maybe it had something to do with the angle of the lighting. 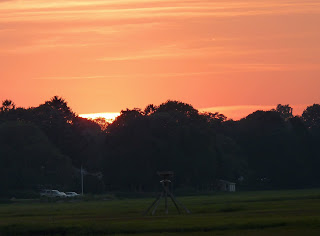 It was 9:00 pm and the maintenance crew hadn't made it out yet. I watched the sun sink below the horizon and then decided to pack up and head for home. 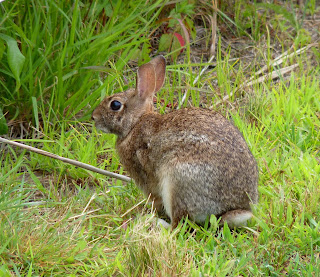 I returned the following morning in time to see a rabbit enjoying his breakfast. I was reading that these rabbits thump their hind feet on the ground to communicate with each other and can let out a blood-curdling scream when attacked by predators. 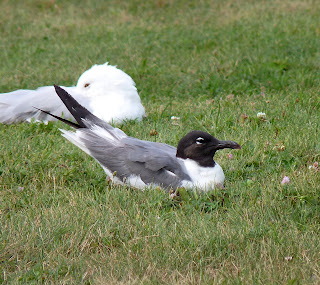 I don't get a chance to see many gulls other than Herring Gulls, Greater black-backed Gulls, and Ring-billed gulls. It was a treat for me to see a Laughing Gull for a change.Some other birds I saw around the park included Glossy Ibis and Little Blue Heron. 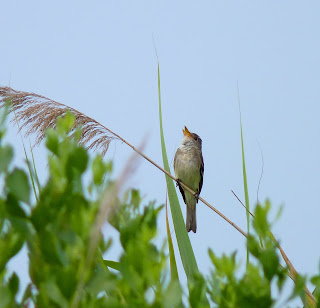 There was also this flycatcher singing away near the Willard Island parking area. I believe it was a Willow Flycatcher based on it's call. I made a nice video of it but unfortunately, I haven't been able to upload videos from my camera lately. 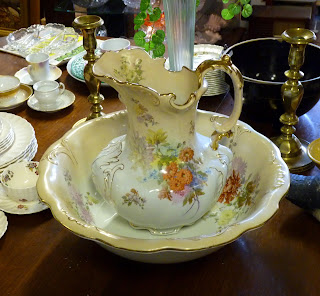 During my travels along the shore I  picked up this antique washbowl and pitcher. It was so nice that I almost kept it for myself but I decided that in the long run, taking a shower is probably a more efficient way to stay clean. Instead,  I brought it to a local antique shop where they promptly set it up for display. 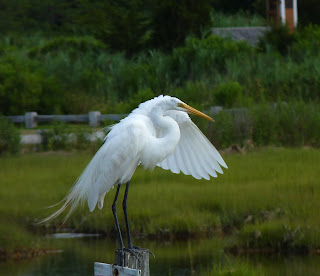 Although my camping plans didn't work out the way I had intended,  spending time at Hammonasset was still worthwhile. I plan to make more visits to shoreline areas before the summer is over, but I think I'll save the camping for fall.
Posted by Larry at 6:50:00 PM

Larry, so sorry the geese pooped on your plans! Looks like you made the best of the situation and were able to see some amazing birds! I would love to get down there sometime this summer! It has been so busy for me here in MA. I am off to upstate NY this next week and then maybe down to KY to see my son return from the war. I love that last shot of the great egret!

Good Birding! Too bad about the Goose poops..
So did you buy that wash basin and pitcher and then resell it?

Kathie-Thanks Kathie-Yeah it wasn't too bad after all. Just HOT!

dawn-Yes-I resold it-not for much of a profit though.

Sorry about your pooped-on camping plans, Larry! No schadenfreude here, but I had to laugh. The Yellow Warbler was probably a first year bird - they do have a pale eye ring.

sorry about the geese spoiling your plans. Looks like you saw some great birds anyway though!

We have the same problem with CG's over here ... sometimes it's difficult to know where to tread! Despite the inconvenience you saw some good birds Larry.

Hilke Breder-Great-now I have to look up a new word.Thanks for the info on the Yellow Warbler.

Crafty-yes I did-fortunately my binocular lenses managed to stay clean.

frank-Yes-thanks-At least I'm glad that I remembered to wear shoes.

Considering the circumstances, I would have commuted too. Camping in the heat would have been as unappealing as the goose poop. Your birding opportunities are good all year long!

Nice trip recap, even though the geese changed your plans. I do like that goose close-up though!

Ruth-Yeah-I don't like the heat either.I my enthusiasm would outweigh the circumstances but it turned out to be the other way around.

Zen-thanks-at least they don't mind having their pictures taken.