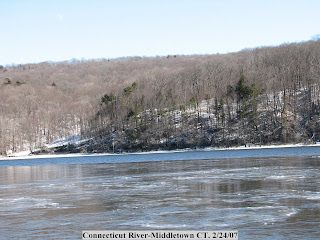 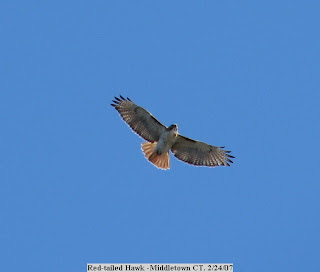 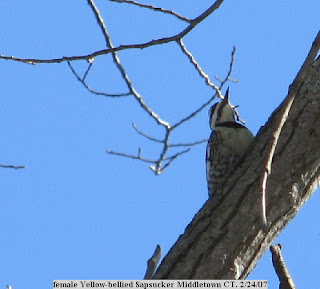 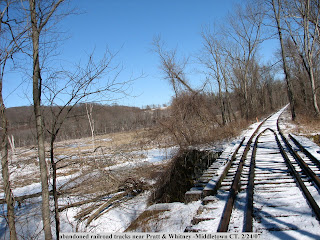 The wind was howling on this cold winter morning but at least the sun was shining. It was one of those days that I could have just as easily stayed home, but I getting outdoors on the weekend is a priority for me.

I decided to take a walk along the abandoned railroad tracks that lead to Pratt & Whitney in Middletown CT. The tracks follow a portion of the CT. River through a marshy section complete with beaver huts. There is a trail directly along the river once you pass the marsh.

I was a tad bit nervous crossing the trestle. Did you ever see a calf get up and walk for the first time? That's how I felt going across the railroad trestle which was covered with ice and had a few broken ties.

After I crossed the trestle, I started to hear sparrows making little chip notes on both sides of me. There were dozens of AMERICAN TREE SPARROW and WHITE-THROATED SPARROWS in the thickets along the side.There was also a few SONG SPARROWS.

As I entered the trail along the river, I saw a large flock of MALLARDS take off. There was a few COMMON MERGANSERS and HOODED MERGANSER near the shoreline. Two RED-TAILED HAWKS put on a nice aerial display. One BALD EAGLE could be seen flying very high overhead. The big surprise of the day was a female YELLOW-BELLIED SAPSUCKER which are somewhat uncommon around these parts. Unfortunately, I couldn't get a very good picture of it.
Other than that, I did not see a lot of birds. Other species included:RED-BELLIED WOODPECKER, AMERICAN CROW, RING-BILLED GULL, NORTHERN FLICKER, CAROLINA WREN, BLACK-CAPPED CHICKADEE, AMERICAN ROBIN, TUFTED TITMOUSE, and BLUE JAY. I was a lot warmer and had much better balance crossing the trestle on the way back. Not a bad day after all.

I like your red-tail picture. Sounds like a terrific day- except for the trestle. I'm pretty sure I couldn't make myself cross that! The blue skies and sunshine are gorgeous. We're in the midst of a good snowstorm here in MN.

Yea - nice red-tail pic! Sounds like a good day out with all the usual winter company.

Thanks for the comments-Even though it was cold , the sun was shining and the skies were blue.