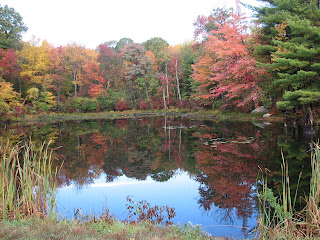 I made a brief check of three local areas on Saturday to see what birds I might come across. It was a very casual morning of birding for me. Once in a while I like to go about my birding with a little less intensity.

My first stop was at the Portland Reservoir. The photo is of a small pond that is across from the reservoir. There wasn't much bird activity here, but it's a nice place to view the foliage. I did get a nice view of a Belted Kingfisher which was perched up on a dead tree in this pond, but I was too distant at the time to get a decent photo. I enjoyed hearing it's rattling call as it flew across the reservoir.

I ran in to an amateur photographer while I was there. He told me that he was trying to capture a photo of the sunrise over the reservoir but the low clouds put a damper on his plans. He said that snakes were his favorite photography subject. He hopes to get a photo of a Timber Rattlesnake at some point. There is a healthy population of them in Portland.

My next stop was at the Cox Road power line crossing. This a nice spot that you can sometimes see interesting birds within twenty feet of your car. There is a stream that runs underneath a thick mass of berry-bearing bushes (say that 10 times fast!), cedar trees, and some nice weedy areas that makes for good sparrow habitat. There were a lot of White-throated, Chipping, and Swamp Sparrows on one side of the road.

One particular bird caught my attention on the other side of the road. It appeared to be a sparrow or finch type of bird with pronounced black markings on the side of its face. I saw it on the ground underneath a bush. What could it be? I spent fifteen minutes trying to relocate the bird, but saw no sign of it. I decided to flip through a field guide hoping for the possibility that I may have seen a rare bird. That was a mistake because my view of the bird was so brief, that I didn't have enough time to gather details. Be sure to observe a bird very carefully before considering the possibility of a rare species. It is important to take detailed notes of a rare bird sighting before reporting it. Of course, taking a photo would be a big help if you can get one. I'm not writing this to preach to you. I need to repeatedly remind myself not to jump to conclusions.

I searched the area a little bit longer. Suddenly, a bird landed in the same location that I had seen the mystery bird. I studied it carefully. It turned out to be a bird that I was fairly familiar with, a female Purple Finch. This one had particularly bold facial markings. My guess is that the lighting had played tricks with my eyes before. There was a combination of sunlight and shadowing casting down upon the area where the finch had been. I'm also more familiar with seeing Purple Finches in trees.

My last stop was at a little known nature preserve in Glastonbury called Great Pond. I found this place very intriguing. I decided to come back early Sunday morning rather than explore it halfheartedly. I'll tell you all about Great Pond Nature Preserve in my next post.

Have You Ever Mistakenly Thought That You Had Seen A Rare Bird?
Posted by Larry at 5:04:00 PM

The trees in your picture are lovely. Funny about the finch. I will post my pictures next week of the female purple finches I saw on the weekend. I have never seen a purple finch and thought they were a new sparrow. Where are the males?

Incorrect identification of a bird has happened me, especially since I'm new to birding. I have to be extra careful and be sure to get a picture. Field guides are a big help to me once I get the photo.

Oh my gosh, yes! I definitely agree that photos are best, though even then you might not always get a sure-thing ID. I agree with your stressing of field notes; I think I'm going to start taking a little personal recording device into the field with me, because I always whisper the field markings to myself but never write them down because I don't want to look away from the bird.

I've had some rare birds in my yard and the problem for me has been confirming that it is, in fact, a rare bird. I note the field marks and look it up in the field guide only to find that it's not a bird that's supposed to be here--especially in the winter time. Then I start calling birders who are more expert than I and my first question always is, "is it possible that I could have a _____ in my yard?" Photos really help and it's been fun for me to make the acquaintance of my local "expert" birders when trying to identify rare birds.

Moi? Incorrectly thought I had a rare bird? Oh let me count the ways . . (that I've embarrassed myself:0)

ruth-Just some sort of optical illusion.I knew enough to listen to my inner voice of reason though.

jkarl-incorrect identification is part of the learning process.If you're not making mistakes, you're probably not trying.

dzugman-I thought about trying a recording device myslef.It would probably make me feel like Captain Kirk from Star trek talking into such a device.

ruthiej-It's great to have some experts to rely on when you need them.

Cathy-Ill bet you it would take me just as long to count my ways.

Larry - I love the title of this post. It's a keeper. It reminds me of all those poor people in Cleveland who also jumped to conclusions--three games too soon!

This is why reports from people who are birding alone are held in more suspiscion than those reported by 2 or more people. It can be so easy to see what you want to see rather than what's there. It can happen with common species too. Some people think you shouldn't bring a field guide out in the field with you at all. I don't agree with that, but I do agree with you that it is important to get as many field marks as possible before you turn to one.
Vern

I became excited once when I saw a white bird I thought was rare. I zoomed in with my camera and realized it was a plastic bag.

Sorta, but normally the only time I see them is when i am chasing them after someone else first found them!

Patrice-Very true!Maybe that's what I was thinking when I wrote this.

Vern-All good points Vern.I've had a lot of people who are opposed to using a field guide ask if they could se mine while out birding.-I don't get the don't bring your field guide theory.

Mary-Perhaps you could start a list of objects that you believed
to be birds.-Listers will make a list of just about anything.

Monarch-It happened to me so I figured why not write about it.