Arrival Of Kinglets,White-throats, and Juncos 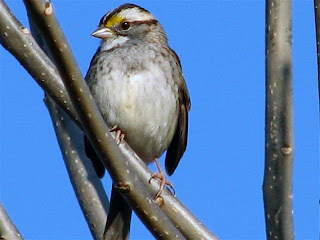 On Sunday, I was scouting the local area for an upcoming Field trip that I'll be leading (scary thought). I led my first field trip last year as a fill-in for a local bird club. I discovered that it takes a lot more time to bird an area with a group, than if you were to cover the same area yourself.I plan on trying to move things along more briskly this year. I'm not too good at identifying Fall Sparrows, but there are others that will help me out. 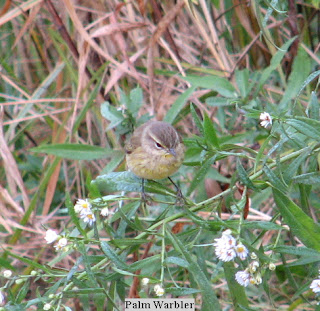 I came across a few new fall birds along the CT. River. I counted 8 Golden-crowned Kinglets. Couldn't catch those pesky little guys in a photo though. The White-throated Sparrows arrived in big numbers. They're already across the whole state. I also spotted a few Dark-eyed Juncos.There were large numbers of Palm Warblers as well. 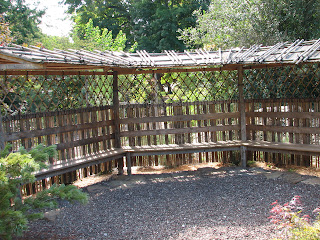 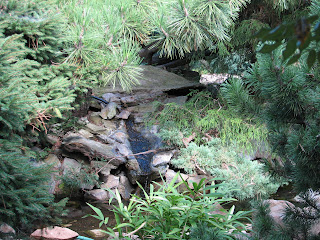 I took a break along the way at a Japanese Garden.I really wasn't sure what that is, but I was curious enough to stop in. It was a small but peaceful area with lots of evergreens, a man-made stream, special huts, and rocks. I talked to the owner who told me that the huts were tied together with special Japanese knots that supposedly never come apart.Unfortunately, someone put Bass in his water which will eventually eat all his Koi Fish. Next time, I'll bring some tea or shade-grown coffee.

Well, I'm going to finish the post up in a hurry tonight. It will be the first post that I actually finished within 10 minutes. I read that bloggers should be able to put out a post this fast, but it always takes me much longer than that. I'll be doing a Songbird game some time next week I think.(correction-20 minutes).
Posted by Larry at 8:17:00 PM

Thanks, Larry. Good luck on your field trip! I've seen warblers in my own backyard.

OK Larry, what time should we all be there for the field trip? ;c)

I'm noticing a huge influx of return visitors this week. Almost as if someone flipped a switch or something. Where I only had doves and house finches last week, now all my early spring visitors are returning.

Larry, I'm seeing more of a variety of birds, too :o) I'd love to be in your group. I'm sure you will move them along at a good pace!

I spend way too much time posting. After I come up with the main idea of my post, it takes me 20 minutes just to download photos from the camera and choose and save the ones I want to use - I usually post at least ten. Another 15 minutes to load them into Flickr. Another 30-45 minutes writing the post and revising. Another 30 minutes to cram it all into a post and format it. Average Posting time: 1.5 to 2 hours. :o/

It's a rare thing when I can do a quick post. I tend to agonize over the words.
Is it too late to sign up for your field trip? Good luck- I know you'll do a terrific job!
I'm headed out to buy some millet to scatter under my feeders for the incoming sparrows. I'm happy to have them back. No juncos in my yard yet! They look best against the snow.
I'm gearing up for your songbird game!!

Patrice-That's exciting to get Warblers right in the backyard!I rarely do.

Jayne-It's interesting to watch the sudden changes.-Be at the meeting place at 7:30 am.

Mary-I can tell by looking at your posts it must take a long time!

Lynne-I understand.-I'm like a turtle when it comes to writing.-I usually have an idea of what I want to say, but don't know how to express it in words.

Hi Larry,
I like your posts and know it probably takes you as long as it takes me to come up with one. Please continue to keep doing what you're doing and don't shorten up your posts just because someone else does a post in 10 minutes, because I (and many others, I suspect) would be really disappointed if you start changing now.

P.S. Good luck with your field trip on Saturday. I hope you get a good group of birders.

Ruthiej-Thanks-I'm not looking to change anything,but I've got to sneak a break by taking a shortcut now and then.

It is always fun to scout out your trips before doing them! Sounds like a great time for sure!

Monarch-The last time I scouted for a trip,the good birds that I found didn't show up for the field trip.

Put me in the 1.5-2hrs per post category. If I'm really smokin' it, and the dial-up is cooperating, and there are no photos in the post, maybe an hour minimum. Otherwise, I can burn an entire evening just on one post.

I saw my first palm warbler the other day--in my yard! I was so excited. I can't wait for Cape May.

dzugman-it takes me a lot of time too-that's why I only do 3x a week.