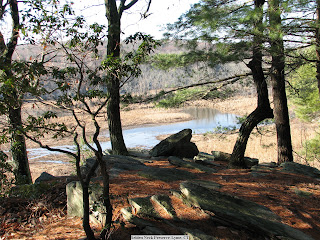 Here is a summary of the places that I visited and some of the birds that I saw during Christmas Week.

Tuesday 12/25/07-Wangunk Meadows, Portland- I took a short walk in the meadows on Christmas Day. It was a cold, sunny morning and the river was smooth as glass. I wanted to see if the Bald Eagles had returned to this area. I walked slowly along the icy path but felt that sudden jolt as my feet slipped out from under me. I hate that feeling of complete loss of control. I stopped and scanned the shoreline. Two eagles were perched in a tree on the Cromwell side of The Connecticut River. One of them looked to be a male that had not yet completely developed the white head and tail . Next to him was an adult female. She was noticeably larger with a solid white head and tail. Other birds that caught my interest were a Brown Creeper, Eastern Bluebirds, Belted Kingfisher, Merlin, and 3 Ring-necked Pheasants. I also counted 6 Northern Flickers which are considered to be less common in the winter. Apparently, there is no shortage of them in Portland.

Wednesday 12/27/07-Mansfield/Storrs area-I wanted to explore this region because it is considered to be a good birding area but doesn't seem to quite draw the attention that other parts of the state do. My hope was that I might find a flock of Red Crossbills or Pine Grosbeaks. Instead, I spent most of the morning driving around and getting lost. When I arrived at Mansfield Dam, I excitedly jumped out of my truck to get a better look at some ducks that were swimming in open water below the dam. Unfortunately, I locked my keys in the truck with the engine running. This normally wouldn't be a problem because I keep a spare key in my wallet for occasions such as these, but for some unknown reason, I had left my wallet along with my cell phone in the truck, too. I had that sickly feeling come over me as I realized the predicament I had gotten myself in to. To my relief, I noticed the window was open about half an inch. It was just enough for me to pry the lock open using one of the aluminum supports from the bed truck cover. I broke the plastic rain guards above the door to accomplish the feat but was more than happy to make that sacrifice. The ducks turned out to be Mallards after all that.

After that, I took a drive along Horse Barn Hill Road. There were 48 Horned Lark picking though the dirt in one of the farm fields but I didn't see any Longspurs or Snow Buntings in the flock.

My last stop was a nice spot along the Fenton River. By that time, it was almost noon and not many birds were around.I did see a Hermit thrush and some Eastern Bluebirds there. I'm looking forward to going back in the spring. There was no sign of Crossbills or Grosbeaks. I somehow ripped the cuff of my pants when I took my hiking boots off. It was just one of those days. 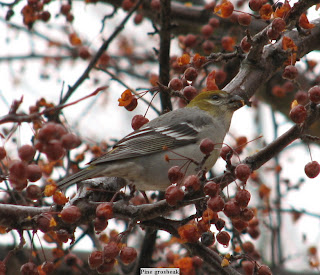 Thursday-12/27/07-Norfolk, CT-Pine Grosbeaks-I already wrote about this in my previous post. It was definitely the highlight of the week birding wise. Here is one more photo of a Pine Grosbeak. I know that it is not an adult male. From what I've read, immature males and adult females can be hard to tell apart, so I can't be sure of the sex of this bird. If anyone has some insight on this, please feel free to give me an opinion.

Friday 12/28/07-Selden Creek Preserve-Lyme, CT-I got the idea for visiting this place from a newspaper article that I read from The Hartford Courant. Peter Marteka writes an excellent column on Fridays called Nature's Path. He often writes about scenic natural areas in Connecticut that aren't always well known by the general public. He recently wrote about a beautiful scenic area called Selden Creek Preserve. It sounded like the kind of place that I would like to visit even if it didn't turn out to be a good birding spot. Upon further investigation, I discovered that this site was listed in a book called Finding Birds In Connecticut as a place worth visiting in the winter. It was a little bit tricky to find but definitely worth the visit. Two Brown Creepers, 2 Common Ravens, and a male Yellow-bellied Sapsucker were among the birds that I saw here. I also saw a large flocks of birds that were eating some sort of seed pods in the tops of the trees. There was probably close to 100 of these finch-like birds, but they were so high up in the trees, that it was difficult for me to identify what they were. After using the process of elimination, I decided they might be Common Redpolls. Since I'd never seen a Common Redpoll before, I wanted to be careful to make a positive identification. I noticed that they were heavily streaked, had short stubby yellowish bills, and had black near their face. Some of them had a rosy-colored breast. I was pretty sure of their identity but it was almost an hour before one of them finally gave me a clear view of it's signature red cap. I'm afraid that I'm getting a little spoiled with lifers this month. Oh well, I turned 42 today and it's been 1 year since I started my blog so why not celebrate? Common Redpoll-another lifer! 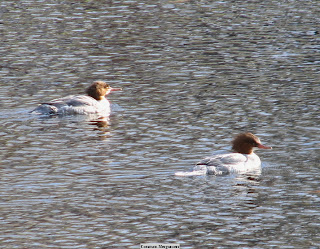 Saturday-12/29/07-I didn't do any birding today, but did clean all of my bird feeders and birdbath. Congratulations to The New England Patriots for a perfect 16-0 regular season record!

Sunday-12/30/07-I took a ride over to Hurd Park in East Hampton. There weren't a whole lot of birds to be seen today but it was nice to work off some of that holiday food with a long leisurely walk. The gate to the park was locked so it was nice to be able to use the entrance road as a walking trail. There were Red-bellied Woodpeckers, Northern Flicker, Downy Woodpeckers,White-breasted Nuthatch, Golden-crowned Kinglets, Ruby-crowned Kinglet, Tufted Titmice, American Robins, Eastern Bluebirds, American Crows and, of course, the ever sociable Black-capped Chickadees.

As I walked down one of the woodland paths that led me to the river, I was thinking about two young men from my hometown who had passed away this week. They were both in their forties. I guess there are some things in life that you just don't have any control over.

There were a few Common Mergansers in the river and some Greater-Black-backed Gulls flying overhead. As far as gulls go, they are probably one of my favorites. They are very large and look pretty impressive to me when they're in flight.

On my way out, I had a short chat with a gentleman who was taking his Boston Terrier for a walk. He told me that he often sees owls at this park and suggested that I visit here very early in the morning. Thanks-I think I might just do that.

I'll bet those two eagles nudged each other and snickered when you slipped and fell! Sounds like you had some bad luck while birding last week but it didn't affect your lifer luck! Keep it up and there won't be any new birds for 2008! The year end seems to be a time for reflection, and with the early deaths of the men in your town, I'd say it's a good time for us all to count our blessings.
Happy New Year to you Larry- I hope it's full of good health and lots of fun.

Happy New Year! Your thought about the young men in your town dying early should encourage us all to live our lifes to the fullest. We should all be prepared for that day! God Bless.

Happy Birthday, Larry, and congratulations on your year of blogging. I'm happy to have met you. At 40, I think you are doing a great job of getting the most out of life.

You had a great week of birding! The little mishap with the truck only made it more memorable, right?

Now, I wonder how you can meet up with a Boston Terrier and not take its photo.

What a week Larry! Happy belated birthday! :c) Glad you were able to get back into the truck...whew. Here's hoping your New Year is filled with even more adventures and lifers.

wonderful week you had and Happy New Year to you and your family!

Larry, Happy New Year and Good Birding in 2008! Looks like you've had some great stuff lately.

Could you send that Pine Grosbeak down here?!

And a belated Happy Birthday too.

Larry,
What at week! Happy belated Birthday! Don't you just hate it when you do stuff like lock your keys in the truck! But congrats on passing the test for truck thievery 101. Never complain about too many lifers, it will change! A Happy and prosperous New Year to you and yours!
Vern

Your grosbeak pics are spectacular! Wow - what great birds!

Happy New Year to you! Hope it's very birdy!

Wow Larry, you had an awesome week of birding!
A Belated Happy Birthday to you and I look forward to your next year of blogging and more songbird lyrics games.

Lynne-We have well mannered eagles in CT-they would never snicker.- It seems to be a time of reflection every time I look in the mirror .-I'd have to agree it's always good to count our blessings.

J-Karl-We should live our lives to the fullest yet there are so many things that put us off the track.

Mary-I did snap a photo but it came out blurry-mishaps are fun to look back on.

Pa birder-I know the whole lifer deal will slow down unless I take up lots of traveling.

laura-They are really cool birds to watch-and same to you.

ruthiej-I am due for a songbird lyrics game.-I lost some interest in that when two lyrics shows came out at the same time.

Monarch-Same to you and your family.

Warren & Lisa-yes-the irruptive species have added a little something extra to this months birding.

Hi Larry! Happy New Year. Your GBB Gull sighting reminded me of one I spotted along the river in Hartford 3 or 4 years ago. It was the first one I'd ever seen and at first I thought a was looking at an eagle; very impressive bird. On another note, I have a very large cache of professional birder material (books, pamphlets, periodicals etc) I purchased some years ago from the estate of a prominent Long Island birder. I am going to be offering it for sale in a few days and will let you and your readers know how to see it. All the Best in '08.
John

I saw my first Great Blue Heron on the CT river when I was dating a guy from Cromwell. Sounds like you've been having a lot of adventures. Falling is never fun but it sure gives you something to write about! Glad you're okay.

Steadyjohn-GBB-Gulls are sometimes mistaken as eagles.I read a report this morning about one of these gulls attacking and killing a Merganser in CT.-I'll be curious about the birders materials.

Kathie-Cromwell has a couple of decent birding spots including a place called Dead Man's Swamp and Cromwell Meadows.

Chiming in to wish you a happy birthday, new year and all the rest!