Preparing For The Christmas Count 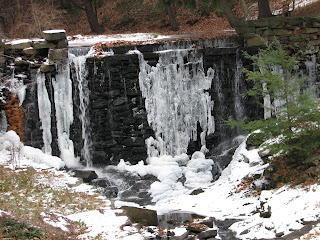 On Sunday morning I decided to visit some areas in Portland, CT to help prepare myself for the upcoming Salmon River Christmas Bird Count. This particular bird count is one of the smaller ones going on in Connecticut this month. I will be counting birds strictly in the town of Portland, although there are other towns included in this Christmas Count. I have lived in Portland for the majority of my life and have been birding here for the last few years. The one thing that I find a little disappointing is that the best birding areas in Portland (Wangunk Meadows and other areas along CT River) are excluded from the count because they are not within the count area which is literally a circle that is drawn on a map which defines the territory within which the birds are to be counted. Portland is not exactly a birding hot spot to begin with, so that makes it a little bit more challenging. A Hermit Thrush or Fox Sparrow, for example, would rank pretty high up on our Portland list. In a way, I like the fact that the expectation for finding uncommon birds in Portland is so low. That makes common birds seem more interesting.
-
As I searched through different areas of the town, I came across some familiar areas from the past. So many of the places that used to be beautiful natural areas are now housing developments. They say change is good because it can lead to growth. I believe that to be true, but in the case of houses taking the place of land, I don't appreciate either the change or the growth. I guess that makes me a little hypocritical. I imagine land had to be cleared to build my house. Fortunately, there are some things that do stay the same. The falls in the above photo look the same as they did 30 years ago.
How Has Your Home Town Changed Since You First Moved There? 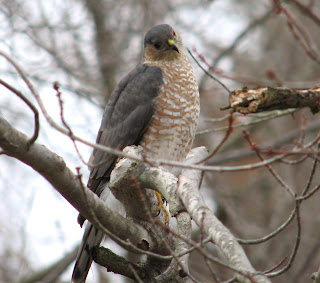 I won't get into too much detail about the birds that I saw, but I plan on adding a couple of stops along power lines to my list. I noted Eastern Bluebirds, Golden-Crowned Kinglets, and Eastern Towhees in these areas. I saw several hawks along the way, including Red-shouldered, Red-tailed, Northern Harrier, and the Sharp-shinned Hawk, as seen above. I visited The Portland Golf Course and found a nice flock of Cedar Waxwings and Yellow-bellied Sapsucker, but later found out that the golf course is outside of the circle as well. 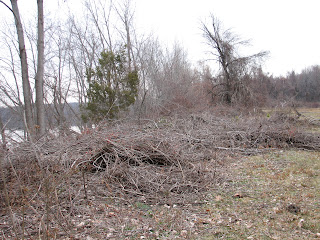 At the end of my scouting trip, I decided to visit the Portland Riverfront Trail which I've avoided lately. There is a nice field near this trail where I've seen the hard to find Brown Thrasher every year. Unfortunately, they decided to cut down many of the trees and tangled thickets that the Brown Thrashers seem to favor. I found this to be a discouraging development and have avoided this area since then. Wouldn't you know I found a Brown Thrasher there Sunday. December is pretty late in the year to find a Brown Thrasher in CT, especially inland. I hope that they still come back to nest because I would miss seeing them each spring. Good luck to everyone who is participating in a bird count this weekend!
Posted by Larry at 6:18:00 PM

How you have a CBC ours is this weekend also!

Larry,
Where I grew up in MA has developed alot over the last 30 years, though they have a CBC that I hope to take part in someday. Don't worry about how many and what type of birds are in the area, go out with the attitude of enjoying the day, and besides that you just never know what will turn up. A Brown Thrasher is an outstanding bird for Decmeber in the northeast! I just hope you won't be burried in the now this weekend. I will be taking part this week in the 1st of at least 3 CBCs for the month. My local CBC isn't until the 29th. Enjoy!
Vern

I'll have to check out our local CBC's in this area. Still have never seen a Kinglet, and would love to see more Waxwings!

I'll have to keep check my listserve in the area on their CBC progress.

Good luck with yours, Larry!

I think our CBC is going to be postponed; it was supposed to happen on Sunday, and I was really looking forward to it, but we're expecting a winter storm all weekend. Good luck with yours!

Monarch-It looks like the cbc that I have just written about has been postponed till next Sunday which is o.k.-I still have one with
The Hartford Audubon Tomorrow.

Pa Birder-Actually, I like the fact that the cbc makes normally seemingly unimportant areas important for a day.-Good luck on your cbc's as well.

Jayne-You should check them out Jayne.It doesn't matter what your level of experience as a birder is to do a cbc.You can tag along with others.It can be great fun.

Mary-I notice how you say you'll check on the progress of others doing a bird count but don't include yourself.-very sly Mary!

dzugman-One of ours has been postponed but I'm doing the other one's tomorrow.-stick with it!

Hi. I tagged you Larry.

laura-I'm not sure if I'll do that one but thanks.