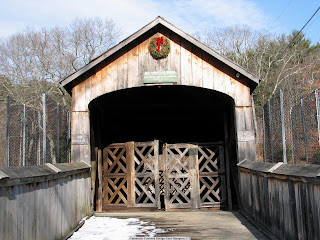 I woke up this morning full of energy knowing that I had the day off from work. I did, however, have some difficulty in deciding where I would go and what type of birding I would do. There has been a Tundra Swan reported down in the Stratford Area. That would be a lifer for me but it is also a 100 mile round trip and that's not really my favorite part of the state. I decided to do some hiking at nearby Salmon River off of Route 16 in East Hampton. My hike started out with a walk across The Comstock Bridge which was built in the 1800's. 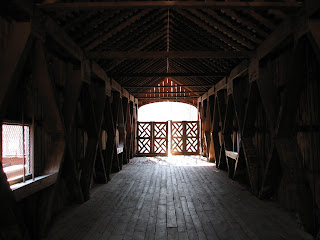 Take a look at the inside of this bridge. It almost looks like paradise is waiting on the other side. 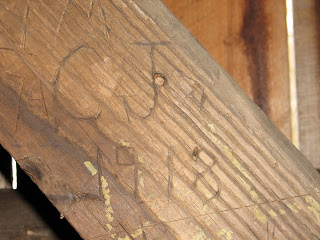 I spent some time looking at some of the initials and dates carved into the beams. There were dozens to look at. I wonder how many of the couples who carved their names inside a heart are still together? How many of those who carved their initials here are still alive? What were there lives like then as compared to now? C.J. must have been standing almost where I was when he/she carved their initials into this wood 90 years ago.
I spent some time hiking around the trails of Salmon River. I saw nice numbers of Black-capped Chickadees, Carolina Wrens, White-throated Sparrows, an Eastern Bluebird, White-breasted Nuthatches, Dark-eyed Jucos, Northern Cardinals, Northern Mockingbird, Red-tailed Hawk, Red-bellied and Downy Woodpeckers. The trails were very icy though,so I didn't get too far. I also walked some of the Airline Rail Trail from a parking lot access off of Bull Hill Road. 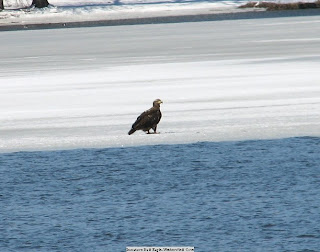 My wife, Joan, accompanied me for a brief stop at Wethersfield Cove. Joan's favorite method of birding during the winter is birding by car. I wonder why? During our short visit, we were lucky enough to get a nice view of an immature Bald Eagle standing on the ice........ 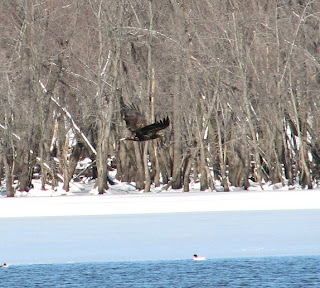 Not for long though. It must have decided that I was a suspicious looking character as it flew off to a distant tree. Those darned immature eagles! Why can't they act their age? 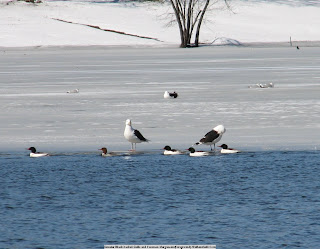 The Black-backed Gulls and Common Mergansers are still having a grand old time at the cove. We saw one Black-backed Gull eating a small fish close to shore. When it noticed we were watching, it put the dead fish back in the water and swam about 10 feet away from it. I don't think the gull wanted us to know he had a fish. It went right back to eating it as soon as we moved away. We also saw a small group of American Crows fighting over a fish. 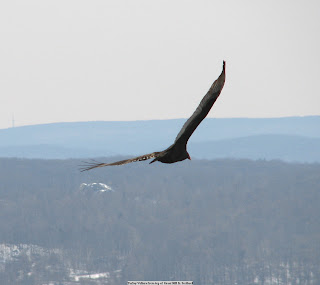 I also climbed to the top of Great Hill Mountain from the blue trail off of Gadpouch Hill Road in Portland. I passed a young couple on the way up. They let me know that the path was not all that slippery and told me that they had seen Turkey Vultures flying in the area. It's really nice to watch hawks and vultures from a high elevation. It almost makes me wish I had a hang glider so that I could join them.
-
At the bottom of Great Hill is a pond which shockingly is called Great Hill Pond. I enjoyed seeing a group of 35 Ring-necked Ducks dunking and diving. Thirty-five is the most that I've seen at one time in this pond. The three Hooded Mergansers that I saw there last weekend are also still there. 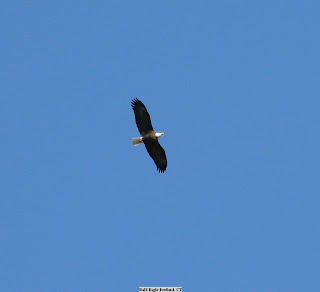 In my immediate neighborhood I noticed a flock of 50+ Common grackles. There were a few Brown-headed Cowbirds and Red-winged Blackbirds in the area as well. Ring-billed Gulls continue to search for scraps of bread in people's yards. The last bird of note that I saw today was this adult Bald Eagle which basically flew over my house. I enjoyed my day of hiking and birding- but it's back to work tomorrow.

This is a video of a Turkey Vulture soaring that I took from the top of Great Hill. Judging by the quality, you would think that it was done by Inspector Clouseau. If you listen closely, you can hear me muttering in frustration as I fail to keep the bird in the frame. I did enjoy the part when the vulture flapped its wings.
Posted by Larry at 7:27:00 PM

Hey- I loved your turkey vulture video! It looked like you could have reached out and touched it. That covered bridge is really beautiful. You know I've never seen one?

looks like you had the perfect day to be off from work! Great birds and love your eagle shots and TV video!

I really liked the pics of the old bridge. You just don't see stuff like that here in Arkansas! Loved the shot of immature Bald Eagle.

I like your idea of incorporating video with your posts! I've going to have to try it out.

Who knew Great Hill Pond would be located at the bottom of Great Hill! You crack me up Larry! :c) Sounds like a magical day, and you did great with the video. I heard very little muttering...lol.

It certainly did pay to have the day off for you! You captured some great shots. My favorite is the inside of the bridge. It's beautiful! What a birding adventure you had.

What a lovely stroll on that bridge. I'm afraid I'm with your wife, Joan, this time of year. The car is a wonderful bird blind ;0)

That vulture video is terrific, but donggone it I couldn't hear your muttering.

I love the bridge & the birds. Awesome on the eagle! Vultures are so hideous & ungainly on the ground, but they truly are masters of the sky. Such lovely soarers! My husband carved our initials in a bench about 7 years ago (when we first met in "real" life.) Although I'm anti-vandelism, I was so touched by it I almost cried. I'm a total sap that way.

Wow! I'm gonna have to come back and read this further. I love old covered bridges - lots of history there, isn't it?

I stopped by to let you know that I tagged you for a six-word memoir meme. I hope you are willing to play, but I won't be offended if you don't.

Even I would sit in the car. Looks pretty cold. Nice way to spend the day off, Larry!

I think you did a great job with the vulture video.

Just the mention of Inspector Clouseau makes me crack up, too :o)

You did a great job keeping up with that Turkey Vulture! It is a difficult thing to do ... :)

Lynne-Wow-you've actually never seen a covered bridge.-I guess I just take it for granted that there are covered bridges in New England.-I did actually touch the vulture by the way.-just the tip of its wing.

jayne-thanks-glad the muttering didn't break your concenctration in watching the video.

Cathy-Honest-I really did say something-it was like an incomplete curse phrase.-Cars really do make good bird blinds though you are right-so that's why Joan wanted to stay in the car-she was using the famous car for a bird blind technique and I didn't even know it!

lana-When I see the carvings in the wood I don't think vandalism-I think history.-That's true what you say about vultures-they are graceful to watch flying-excpet they do a lot of rocking in the air.

mary c-I'd probably play along after I catch up on everyone's blogs.

Mary-That's how I feel sometimes when I'm handling a camera.-I'm like a bumbling detective.

anonymous-Thanks-It actually is pretty dificult unles they stay out in open view.-this one kept disappearing around the corner.

Pa-birder-I'm going to have to agree with you on that statement!

I'm always amazed by your photos, Larry. Not only are they very good, but I love the historical structures. Things are not as old over here, and there seems to be little interest in preserving the past. Progress! More strip malls! Development! Economic stimulation! Most of the land here was once tall, old trees... By the way, you came home with quite a list for one day's outing!

Interesting blog! You had some great sightings, too. I can see I'll have to take a ride up to Wethersfield Cove one of these days, just for a little peek. I haven't been there in years, although we have talked about it. When I was in my teens and early 20s, friends and I would cross the Comstock Bridge and follow the trail into the woods, where we would camp out. If I'm not mistaken, I seem to remember a rickety old bridge back in the woods somewhere, too, and being in a car that actually drove over it. It was scary! I think the Comstock Bridge was open to cars back then, too. I'm not sure when it was closed. (Sigh... CRS.) By then, I think I had moved to another state.

Patrice-Ibelieve I know-we have much of that around here too.-It's good that they at least try to preserve what they can.-I don't actually list all of the birds I see during an outing.-I think it just gets to redundant.-That list of birds wouldn't live up to your average birder's standards but I'm glad that you are impressed with the list.

Sandpiper-It sounds like those were some fun times along the Salmon River there are a few other historic remains in the area.I think the only interesting time in Wethersfield Cove is basically during winter.-I think someone just spotted an Iceland Gull there.

Another good & sunny birding day for you Larry! I'm surprised you have grackles and cowbirds back already--ours are playing it safe and waiting down south for warmer weather to arrive in Minnesota.
Great TV video (your frustrated mutters made me LOL--been there, done that!)

Hi Larry, they were fun times.

I like stopping by Wethersfield Cove when we go up to that area. There have been some pretty interesting and unusual sightings around CT in recent weeks. Another seal down in Old Saybrook yesterday and tundra swans have been spotted in Stratford this week.

Larry, Comstock Bridge! I've crossed that bridge many times! I have photos of it myself! While I've never carved my initials in it, I think other people I know may have! Visiting there is one of my favorite things to do when I go home. My sister ran a half marathon on the airline trail last autumn! I love it when you post about places I know! Nice photos!

ruthiej-Ahh-you detected the frustrated mutters.As far as blackbirds and grackles-we are in a river valley which gives good shelter and provides some food for birds that show up early.

Mary-I see you know your Clouseau-perhaps you would make a good assistant chief inspector!

Sanpiper-Yes-I have been keeping an eye on sightings but I only chase after something that really intrigues me.

Kathiebirds-Well-I'm sure I'll be posting on more areas that you are familiar with in the future!