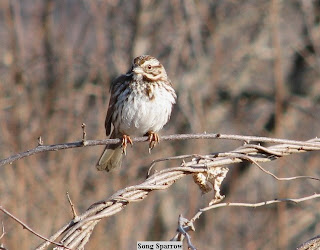 Haddam Meadows-There were a couple of things I had in my mind when I set out to look for birds on Monday. First of all, I wanted to make a point of using my camera with a tripod to take videos and pictures. I just bought an extra quick release plate which allows me to easily switch between using the scope or my camera on the tripod. The other thing I wanted to do was try out the new chair blind that I recently purchased.

I started my morning at Haddam Meadows State Park. There was the usual mix of birds that you would expect to see this time of year in Connecticut including lots of Song Sparrows like the one above and also a good number of Red-winged Blackbirds in the swampy portion of the park. 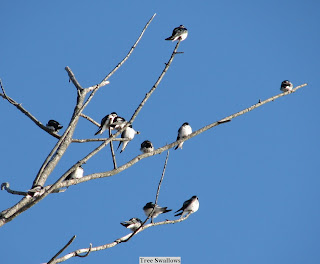 I did see my first Tree Swallows of the year perched in the highest branches. They were preening and catching a little sun. It was nice not to worry about my hands staying steady while taking photos using the tripod but it didn't get me any closer to the birds. So would the new bird blind solve that problem? 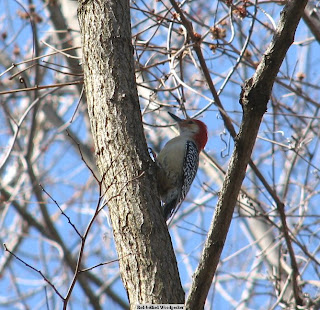 The Chair Blind Blues-I recently mentioned that I had purchased the Ameristep Chair Blind. After setting it up in a wooded location, I sat in it for about two hours. I could hear Tufted Titmice and Black-capped Chickadees flying right past me. Their were also Cedar Waxwings and Northern Cardinals nearby as well. Unfortunately, none of them landed in a location where I could snap a photo. The blind sets up easy enough but I can't say that I enjoyed using it. Here are a few of the problems that I had while using this product.

I just don't think it's going to work out for me. Taking photos from your car or photos from a window in your house are two easy and effective ways to get a closer view of birds without scaring them away. I plan on making a list of places that have already built permanent blinds for wildlife viewing. I've found a few but they don't seem to be set up in a location where you would see a lot of birds.

Here are some of the other ideas I've read about:

The bottom line is that I would like the blind to be where the birds are before I am. That means I will want to use something that I don't have to worry about being stolen. 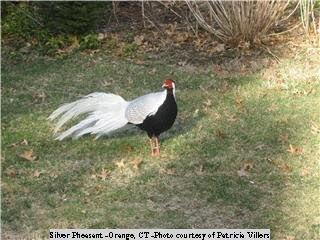 Last week it was brought to my attention that there was a mysterious bird making its way around people's backyards in Orange Connecticut. The mystery bird turned out to be a Silver Pheasant which is a bird that is not native to this area. This photo was taken by Patricia Villers. She writes for The New Haven Register and also has her own blog called Late Bloomer Boomer. She recently wrote a story about the Silver Pheasant. Click here to read the article.

Here is a short video of a Northern Mockingbird imitating the songs of other birds (No camera shake-I used the tripod!).

Can you identify any of the species that the mockingbird is imitating?

Thanks for the critique of the blind Larry. Sounds like something simpler would work better.

How cool to see that pheasant!

Did I hear a Northern Cardinal coming from that Mocker? :c)

You saw lots! Too bad about the chair blind being so restricting. It seems you have some good ideas on ways to get closer though.

While on the subject of equipment and tripods, have you looked at Gorillapods? We ordered one and are expecting it to arrive today. It seems like it might be a handy contraption.

I don't know the bird (or birds) that the mockingbird was imitating. I just love when they sing. The sounds are familiar, but I'm not good at identifying a lot of birds that way. I did hear a red-winged blackbird in the background. I recognized the sounds, but can't i.d. them.

Thanks for the report on the swallows. Now I know to look for them here in eastern Massachusetts any day now, if not already.

I've never tried to make a blind, but if I did, I'd just try an old brown or dull green blanket thrown over my head and shoulders. Cheap and easy to carry. No Mega Mart required.

To bad about the chair blind, I will have to get me one of those quick releases for my tripod. Thanks for the info.. and great shots by the way.

Jayne-Thanks-Yes-I think simpler would be better.-I didn't actually see the pheasant-The photo came from Patricia Villers.The Cardinal was not the first one I picked up on but I think there is a touch of Cardinal in there.

Sandpiper-Yes-there is lots of background birds including the Red-winged Blackbird-you get extra credit for that one.-I've heard of the GorillaPods but never used one.-Sounds like a clever gadget though-something I may look into.

mojoman-If I had an old blanket, I might try one but I get your point about the megastores.

ah, I tried taking pictures of black capped chickadees- they live in my yard....but when I looked at the photos, you couldn't see them. I guess I'll need a new kind of camera to take some bird pictures.

Always with my black capped chickadees is a bird that is dark dusty grey. Looks kind of boring until it takes flight. The tail opens in a fan of black and white stripes going the length of the tail. Do you know his name?

What an awesome video and song capture! I'm loving this new feature of your blog.

I did hear him do a Cardinal? Did I hear a little Song Sparrow?

I've got to listen again.

Wait! Wait! Did I hear a Wood Thrush in there?! Could swear I'm hearing an eee-oh-laaay.

Tera Rose-I'm thinking maybe You're talking about a Dark-eyed Junco which is a small grayish bird but does have the white outer tail stripes you talk about.-As far as the camera-

There are a lot of point and shoot 12x optical zoom cameras available.-They can go for as little as little as $200.-You still have to get pretty close to the birds though.-The key is optical zoom.-Digital Zoom means nothing.-It basically just crops your picture using the camera.

Cathy-You definitely heard a Song Sparrow but I think it was a nearby one-maybe the Mocker imitated him too. Wood thrush is the one that caught my attention.-I thought that was pretty cool since we don't have any Wood Thrushes around yet that I know of.

This is great and looks like you had a wonderful time! You know we had our first Tree Swallows today also!

I definitely heard a RW Blackbird and an American Crow in the background...

Your blind dilemma is too funny. The refrigerator box with cut-outs might work!

Monarch-The Tree Swallows are a nice reminder that more migrants will soon be coming.

Mary-See that Mary-you've got the magic ears.-The box may work for the backyard as long as I don't have to buy a refrigerator to get one!

Larry,
I don't have the patientce to try and take pictures. Sorry your blind thing isn't working out so well. Hope it isn't putting a damper on your birding.
Vern

Sorry about the blind.
The silver pheasant may have escaped from a local breeder (my ex & I used to raise game birds & knew people who had these.)
I can't ID the mockingbird's song, unfortunately. Looking forward to the answer.

Thank you for the blind critique. I too have been thinking about making my own blind, one I can leave in a good spot on the marsh. There isn't much human presence on the marsh, so I don't think it would get stolen; I just have to get permission from my neighbors who own the property. When I build one, I'll definitely post construction diagrams, photos, etc. If you build one, I'd love to see it!

Pa-birder-No problem. I already returned it.It isn't putting a damper on my birding.-I just think it would be nice to get even closer to nature. Occasionally I have come into an area where I'm able to get close to birds.-It's as though they weren't expecting humans to be there.-The only thing that puts a damper on my birding is bad weather and my j-o-b.

Lana-could be-Besides the ones mentioned, I also heard a robin,an attempted Carolina Wren call?,and a short flicker sound.-It's hard to say for sure because they don't always do an exact imitation.

dzugman-I'm planning on doing something more simple tha you are.-Just basically clothes-pinning up some material.-I may do a more formal blind if the temporary one turns out to be in an ideal spot for wildlife viewing.

Oh, so the crow call wasn't produced by the Mockingbird. That was a little too realistic! Nice video thogh.

Hi Larry, Stop by when you have a chance...I have an award for you.

Hi Larry, darn about the chair blind! I'm serious about getting one too, but I know I need something that will allow me to see at ALL angles since I have black bears here. I made one for a man a few years back...he supplied the pvc frame and I made him the balance to fit with mesh flaps on all four sides to view accompanied with a flap door opening. He loves it.
The pheasant is stunning, WOW!
I thoroughly enjoy always listening to the Mockingbird. What a talented bird. Great post, Larry, thanks!

Aunt B-I thought it was a pretty cool looking pheasant to.-It may take me a while but I will get some sort of blind set up.-Glad you liked the post-thanks.

Larry, your singing mocker reminds me of springtime in New England! How nice to hear it sing! Wonderful information in this post. When I was young we had an old refridgerator box and I remember lying under it and thinking I could run away and live in one of these things, until it rained of course!

Larry! This is exactly what I thought of doing late Sunday afternoon while my resident mockingbird was singing away atop the neighbor's chimney! I still want to try and capture it using my Powershot- stay tuned :)

You have been tagged by a fellow bird blogger. For details see my April 2nd post at: http://birdinggirl.blogspot.com

I'm sure you'll come up with something good!

Kathiebirds-Thanks-they sure can sing! It's a good thing you didn't figure out how to waterpoof your refrigerator box or you might still be living there!

birdinggirl-I'll look forward to watching your Mockingbird to see what songs he sings.-As far as the meme-I'll take a look but usually don't do them.-But thanks!