The Return Of The Yellow Warblers 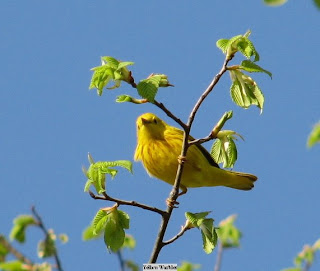 I am writing this post in reverse chronological order starting with Sunday evening. It 's been about 5 years since I took my first walk with the sole intention of looking for birds. My first birding spot was a trail that runs along the Connecticut River that is within walking distance from my house. One of my first great revelations came when I discovered there were tiny yellow birds with thin red streaks on their breasts living in the bushes near the river. 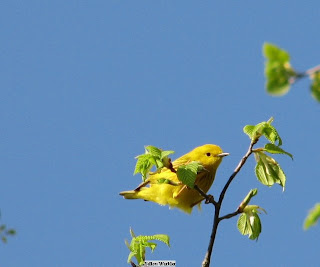 I carefully searched through my first real field guide, Peterson's Birds of Eastern and Central America, to try to find the identity of these tiny yellow birds. It didn't take long to figure out that these birds were Yellow Warblers. Where the heck did they come from? It amazed me to think that these birds had been around my whole life and I was just now seeing them.
-
Sunday, I walked the same trail that I did five years ago and was happy to see that these warblers were back again; right on schedule. One of the things I like about them is that they like to hang out in thickets, which means I don't have to strain my neck looking up into the tops of trees to see them. I also heard a Wood Thrush singing from somewhere deep within the bushes. This is another bird that seems to come back to this area every year, which surprises me considering the patch of woods along this trail is very small. 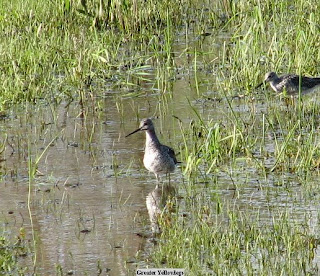 There is a private field adjacent to The Portland Riverfront Trail that is often flooded, as it was this past Sunday. A quick scan of the flooded area revealed 2 Greater Yellowlegs and one Solitary Sandpiper, which is less common in Connecticut. The Solitary Sandpiper has a dark back, greenish legs, and a distinct white eye ring. There was also a Red-tailed Hawk circling over the field as well as a pair of Wood Ducks hiding in the weeds on the opposite side of the flooded field. 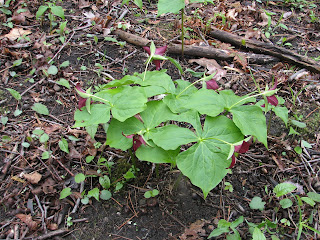 ---------------------Can You Name The Plant In This Photo?
-
Hartford Audubon had a field trip scheduled for Sunday morning at Gay City State Park. This park has a strange and interesting history that you can read about here. This is a wonderful park to bird in. It has well maintained trails with bridges to lead you over the streams. It also contains a pond and some interesting boggy areas. Some of the birders who came along for this field trip were also interested in plants. 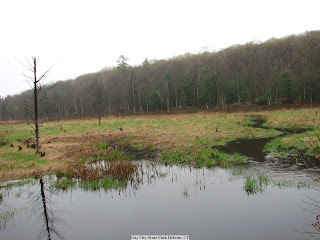 The trip leader was under the assumption that his trip would be rained out since it was pouring as late as 6am in the morning. To his surprise, six hardy birders showed up for his trip any way.
-
Birding was a bit slow, possibly due to the weather conditions. There wasn't a lot of bug activity and it was a bit chilly. Although the sun didn't come out, the rain held off for the entire trip. I did see my first of the year Black-throated Green Warbler, which was singing its zee- zee- zee- zee- zoo- zee song. We also saw a couple of thrushes. One of them appeared to be a Veery and the other a Hermit Thrush. We all had nice looks at a Yellow-throated Vireo as well. 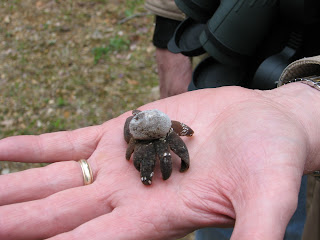 ------ ---------------What Is This Thing?
Saturday, I went on another field trip sponsored by Hartford Audubon at Machimoudus Park in East Haddam. Interestingly, I met a birder named Ed who reads my blog on occasion. It was fun to have him join us for the field trip. It is his hand that holds that strange looking...that's the problem, "What is it?"
-
We had to work for the birds we saw, but in the end it turned out to be productive day. We had excellent views of an Orchard Oriole and Baltimore Oriole in the same flower-covered tree right next to the parking area. Orchard Orioles are uncommon in Connecticut, but they seem to be doing well at Machimoudus Park. We were able to patiently pick out an Ovenbird that was well-camouflaged amongst the fallen leaves. We had a great view of its striped head and breast. It took us a while, but we finally tracked down a singing Prairie Warbler. For some of the birders that was the highlight of the day. Adrian, the trip leader, was talking about how a Pileated Woodpecker has been taunting him at this park. He could see evidence of its holes all around and would often hear its rambunctious call. On this day he, along with most of the group, had a nice view of the bird at the top edge of a hill. I also saw my first of the year Scarlett Tanager.
-
I believe the total number of species seen or heard was 53. Other birds of note included a Barred Owl (calling), Yellow-throated Vireo, Yellow Warbler, Black and White Warbler, Louisiana Waterthrush, Northern Parula, Yellow-rumped Warbler, Wood Thrush, Pine Warbler, Eastern Bluebird, Great Blue Heron, Tree Swallows, and Eastern Phoebe.
-
There was one last surprise at the end of the day. Just as many of us were getting into our cars to leave, I heard someone say "Peregrine Falcon flying overhead!" We watched it soar with its pointed wings slicing rapidly through the sky. It was a great way to end the morning!
-
What was the first warbler you ever identified yourself?
Posted by Larry at 5:58:00 PM

Yikes!! You had an amazing day! Yellow Warbler would be a lifer for me. That "thing" looks like a big hairy spider to me. ICK!!

Th first warbler I id'd on my own was the Black and White Warbler.

Very nice trip! Thanks for sharing your trip with us. Very nice pictures and discussion of the birds you saw and heard!

My first warbler was a Pine Warbler.

That would be a Yellow-rumped Warbler probably in 1986 or so. Sounds like a spectacular bird day Larry!

I can't recall my first warbler but it was probably a yellow-rumped back in the fall of 1987, around Belleville, Ontario.
That thing from outer space might be a fungus of some sort. We have a kind of mushroom here in Germany that I believe was introduced from North America and it looks like the tentacles of an octopus coming out of the forest floor. That might be it.

The flower is a Red Trillium or Wake Robin. The first warbler I ID'd was a Yellow Warbler. They are most plentiful around here. In fact I seldom see anything else. Your Warbler pictures are great.

Lynne-It was a nice day Lynne.I wouldn't say amazing but we had saw some nice birds. I hope it wasn't a big hairy spider or I'm not going in those woods anymore.I don't want to see any spiders that look like that unless they're behind glass.Was the Black and White Warbler red all over?

J Karl-Thanks-Thanks-Pine Warbler is a little more challenging than the yellow Warbler I first saw.

Jayne-I'll bet Yellow-rumped Warbler made it on a few birders first warbler seen list. Interesting- You saw your first warbler 22 year ago and I saw my first one just five years ago.-I missed out on a lot of warbler sightings.

Jochen-Jayne even has you beat by a year! I was wondering if it was a fungus.It might be perfect for vegeterian calamari.

ruth-It's nice to know that the Yellow Warbler is doing well up your way too.yes-Trillium was what I was told.-Although they didn't mention the alternate name of Wake Robin.-Glad you like the warbler photos.

Hey Larry, those are some great shots of the yellow warbler. Much better than my blurry one! I'm anxious to get out there more and perfect my camera use.

Looks like you've been pretty active lately. Isn't it exciting to see the warm season birds start to return?

birdinggirl-I really know very little about photography but I notice that late afternoon/early evening lighting on Sunny days seems like a good time to take photos.I'm always active birding on the weekends but this time of the year I'm seeing more birds.I don't think I'll ever perfect my camera use but hopefully I'll get lucky with some shots.

I thought your plant picture was a red trillium also.
That thing in your hand? I don't know and there's no way in you-know-where that I would've picked it up.
My first warbler I identified? Not sure but they remain very difficult for me.
Fun post - thanks

I wouldn't pick it up either.-It wasn't my hand. Can anyone tell me where I go to shut off this star rating thing?-thanks

Hi Larry,
I liked reading about all your new migrant bird sightints. How fun to meet someone who reads your blog too.
I very distinctly remember my first warbler--the yellow warbler (seen many years ago while turkey hunting).

Great post! I was in your area on Sunday and saw that the river is still pretty high.

You saw a lot of things on this walk! I've been seeing a lot of warblers here, too. Nashville, Black and White, and Yellow Warblers mostly. The first one I ever spotted and identified on my own was probably a yellow warbler.

I can't believe you're already seeing Trillium there. I need to go check out a large patch of them that I see at Black Rock Park along the Mattatuck Trail in the spring.

The mystery thing that looks like a spider is a type of Earth Star mushroom. Good spotting!

Yes that tarantula looking "thing" is an Earthstar fungus. The world of fungi is as full of wonderment as the avian world. Example: the largest organism on the planet is a Honey Mushroom (Armillaria ostoyae) found in Oregon covering some 220 acres;it is 3.5 miles across, and estimated to be at least 2400 years old.

ruthiej-It's surprising but hunters and birders have some things in common.Interest in land conservation and wildlife observation are among those things.
Shooting Turkeys and watching warblers-quite an interesting combination.

Sandpiper-A star mushroom-thanks-I knew that someone would know.The trillium garden that I saw in the woods was pretty impressive.I noticed that birders were seeing 18 and 19 species of warblers at Nehantic Forest and East Rock Park.-I think that I will take a ride to Nehantic Forest some time over the weekend.

steadyjohn-So you know about mushrooms.I don't know much about fungi but it can be interesting to look at.That Honey mushroom would make one heck of an omelette!

Larry, what an interesting post! I think my first warbler was either a yellow-rumped or a pine warbler in Livermore Falls, ME. Until that point I wasn't even aware of warblers! Since they didn't come to my feeders or wade in the water, I ignored them. My loss! Now I'm out to "capture" as many as I can! I have never seen a black-throated green. Good for you!

It is strange that warblers have been around all of our lives yet most people don't even know what they are.