Back To Chatfield Hollow 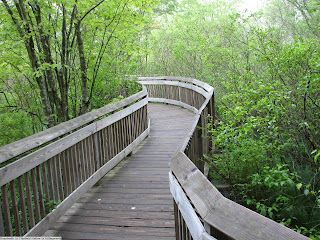 I must have been to Chatfield Hollow at some point in my life but I really can't remember when. It came to my attention that a boardwalk had been built there and I was looking forward to checking it out. The boardwalk takes you right across a swamp and allows for great views in all directions. Unfortunately, I forgot my vest which contains a lot of items that I like to use when I'm birding. I also lost my favorite pen when I was walking one of the trails. You're probably thinking big deal-you lost your pen. The thing is , I've noticed most of the pens manufactured these days don't last very long. I bought a batch of retractable pens two years ago that have never let me down. I kept them in my truck year round and they never dried up. I was disappointed to lose my last one.

It's also important for me to write things down while I'm on one of my hikes. I can remember the birds I've seen and the places I've visited. What I can't remember is exactly what I was thinking and how I was feeling at a particular moment. When I try to recreate these things from memory it just doesn't seem to have the same impact. 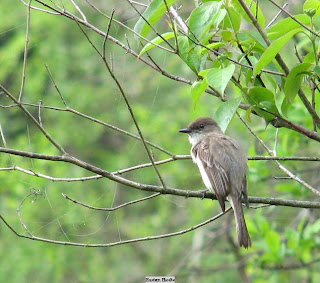 The rails of the boardwalk seemed to serve as a partial blind allowing me to watch some Eastern Phoebes catching insects on the wing. This one didn't even seem to notice me at first.... 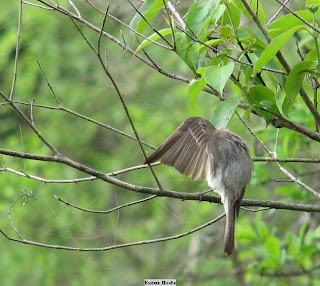 but then seemed to turn camera shy-"Please, I don't like to have my photo taken!" this bird seemed to be saying to me. 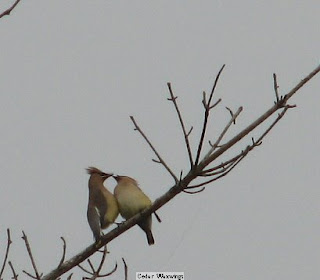 It was very gray when I took this photo but I thought it was worth posting this one. The scene between these two Cedar Waxwings speaks for itself. Shortly after I took this photo, a group of joggers came rumbling across the boardwalk. Remind me to make jogging off limits if I ever build my own nature observation boardwalk. Perhaps I could have a built-in catapult system to propel violators into the swamp. That wasn't very nice of me was it? I take it back. I'll just confiscate their running shoes and make them walk back to the car barefoot. 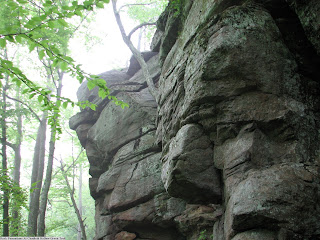 I may have went to Chatfield Hollow with birds on the mind but I guess you could say that I left with rocks in my head. I have to say that I was really in awe of the beautiful rock formations at this park. I wasn't at all surprised to hear that Native Americans had used this area to hold council many years ago. 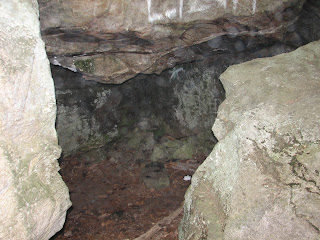 Here is one of the many caves in the area. You can learn more about geological history of this park here . There were several marked trails but I only had time to explore the green trail. Groups of people started showing up shortly after the gates opened at 8am. It also started to get quite muggy. I don't like heat, humidity, or mosquitoes so I plan on doing most of my birding between the hours of 5am and 8am. for the remainder of the summer. 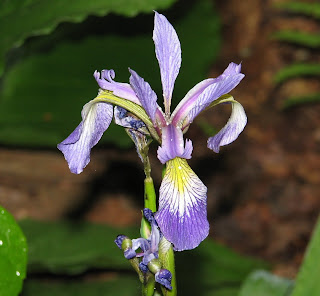 Okay, time for a quick flower quiz. I saw a lot of these flowers near damp areas in the park.
-
What kind of flower is it?
-
I wasn't at the park very long so I'll hold off until my next visit here before making a list of species seen.
Posted by Larry at 6:31:00 PM

Being from Texas, I'm not an expert on NE flowers; however, it seem to match characteristic of the Blue Flag or Wild Iris (Iris versicolor). Dark blue lines and lighter towards the base. Was it about 3' high?

Nice post. I liked the bird photos. Occasionaly runners see that you are watching something and will walk quietly by. The others, take their shoes away.

I'm always so irritated when I'm out birding, obviously in stealth mode, and some clods come tromping on by. I'm less irritated if they actually stop and ask me what I'm looking at.

I have favorite pens too. I understand.

Texas travelers-I hadn't realized it but the Blue Flag iris is the state wildflower of Connecticut.

Lynne-It just seems to me that a boardwalk built through a swamp would be for walking or nature study.There was plenty of pavement to run on as to not have to stomp across wooden decking.

The flower looks like a kind of iris that's been horribly abused. *LOL* Love the waxwing shot. Ironically I posted a picture of a boardwalk on my blog about 15 minutes ago...

A couple great images here!! Love the phoebe and your caption and the great waxwing photo. Thanks for sharing!

lana-I know-nice waxwing pose-too bad I couldn't get a better photo of the waxwings. You posted a photo of a boardwalk? Copycat!

jayne-with the proper funding it could become a reality!

Zen-thanks! I was a lazy birder on Sunday-I'm surprised I got any photos.

Hey Larry,
Looks like youre doing a fine job birding, I'd say you were much more than a beginner now! I will have to check back a catch up on some posts later. I love the picture of the broad-wing hawk with the chunk missing in the wing! Great shot!

I call them Blue-flag Iris! Keep up the great photos and post!

Great post! It sounds like you saw some great things. Nice sighting of the waxwings. It seems like we're seeing a lot more of them in recent years. I haven't been to Chatfield Hollow since I was a teenager. That boardwalk looks fantastic.

I just read your comment about about the state flower. Are you sure it's not Mountain Laurel? It used to be.

Sandppiper-Mountain Laurel still is the state flower.-What I read must have been misinformation.-I thought maybe mountain Laurel was a different category like-plant but it is flower.-Here's one of the places I saw it.

Thanks, Larry. The page seems to indicate Mountain Laurel, but then they put the Iris on the stamp. Confusing! :-)

I was going with blue flag iris as well.

Mountain laurel is PA's state flower too! Beautiful little boxy things they are.

Great pics, and I agree--jogging should not be allowed on boardwalks. That's not why they're there! Perhaps you could talk to park management and ask them to post signs directing joggers to trails? Just a thought. Although the ejector idea is also good!

Larry, you had me laughing out loud about the joggers. No apology needed, though I come from a family of joggers myself. Me, it's hard to jog since I am always stoppong to look at birds! Well written post and I, too understand about the pen. I am very fussy about mine also. It's hard to find a good one. Keep up the good work!

dzugman-I wouldn't go that far.-I don't think the Boardwalk should be for jogging but really there are more important things to worry about in the world.

Kathiebirds-You will have to come to Connecticut to jog on my new boardwalk after it's built.-It's packed with many surprises! just kidding of course-thanks.

nice photo of the waxwings! as for the joggers, on the one hand I agree, it's annoying (as are school groups with bunches of young people yelling and running) but on the other hand I love the fact that people are out enjoying nature in their own way. BTW, jogging on the boardwalk is not permitted at our local wetlands, Huntley Meadows, but people do it anyway.

Larry, I will be in CT in July and I will be atempting to jog. I promise to avoid your boardwalk, however!

Larry, that photo of the iris looks awfully similar to one I caught during my last birding trip Memorial Day Weekend: http://birdinggirl.blogspot.com/2008/05/female-yellow-warbler-at-blue-hills.html

Great minds think alike! And our camera does a pretty nice job in macro-mode, doesn't it?

Don't hate on the joggers- can't we all get along? I try to be considerate when I jog along the river. And actually, the joggers we encountered during our trip to Blue Hills tipped us off to the Rose-breasted Grosbeak, so see? That jogger you want to catapult could actually be a birder in disguise, trying to get some exercise in :)

BirdingGirl-I don't hate joggers.Sometimes I just write stuff so I have something to write about.