Is That An Acadian Flycatcher I Hear? 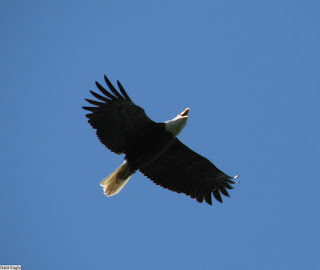 I've enjoyed several early morning walks this month despite the increasingly humid conditions. I've resorted to wearing long sleeved shirts, long pants, and gloves to protect against mosquitoes. Summer is my least favorite season but I enjoy early morning walks through the forest. It teds to be a little quieter than it is in spring. It provides an opportunity to observe young birds that have recently left the nest. While it's true that I may see fewer species, I am able to slow down to appreciate the birds that make themselves visible to me.

As you can see from the top photo I had a fairly close flyover view of a Bald Eagle who also vaocalized a bit.
Here is a video from my recent trip to New Hampshire. It shows a moose having a drink or maybe looking for some marsh salad. The voice you hear in the background is the guy that was driving the truck. 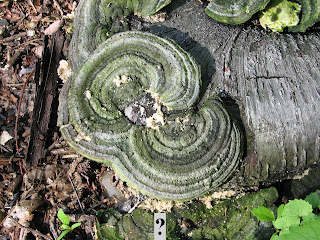 I took this photo during a recent walk in the Maromas section of Middletown. Do you know what type of fungi this is?

I also saw several Yellow-throated Vireos. They have a burry tone to their songs. The song you are hearing in the video is much shorter than the version I was hearing them sing in the spring. While out in this stretch of woods, I observed a family of Worm-eating Warblers dining together. In the same area, young Blue-gray Gnatcatchers were being very vocal as they begged for food from their parents. 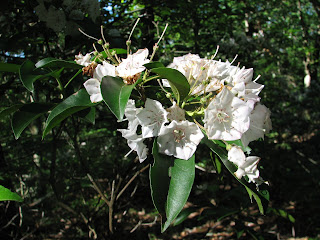 The Mountain Laurel was blooming throughout the entire area during my visit to Meshomasic Forest. It felt like I was taking a walk through an arboretum. As I looked under one of the laurel bushes, I saw a male and female Eastern Towhee scratching through a pile of leaves looking for food. I really hadn't anticipated seeing towhees here. It was one of those serendipitous moments for me. Veeries, Wood Thrush, and Scarlett Tanagers seemed to be abundant. As I walked further along the trail, I could hear two Barred Owls calling in the distance. If only they would come a little bit closer. There are plenty of trails running through Meshomasic Forest. Not all of them are marked and it takes some time to become familiar with them but I think that it is worthwhile. I crossed over a dirt road called Woodchopper's Road. Two Louisiana Waterthrushes perched low on a branch just over a stream. A little further up the trail, I encountered a young Black and White Warbler. It was trying to sing but couldn't seem to get the song right. It actually sounded to me like it was starting of with it's typical weesie weesie weesie sound but the ending sounded like it was doing a bad imitation of a waterthrush. It was interesting to listen to.

As I was exploring one of the side trails beyond the reservoir, I came across a flycatcher. It had such a short call that I barely noticed it at first. I caught a few glimpses of the bird but was not completely certain as to which species it was. I've always been told that flycatchers are best identified by the sound they make. I only captured one short call of the bird on this video, but it gave me an opportunity to listen to its call more carefully at home. After comparing the songs of flycatchers, I was able to determine that it was an Acadian Flycatcher! This is one of the less common flycatchers in Connecticut. It was also a lifer for me. Many field guides and birders describe the call of this species as sounding like "Pizza!". It sure didn't sound like that to me at the time but I think that I'll be able to recognize the famous "pizza!" call in the future. It was very exciting to come across a bird like this in my own neck of the woods. 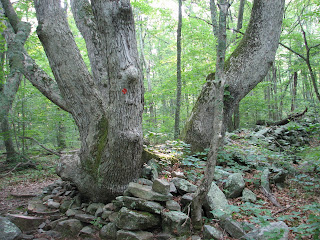 I took a ride to Hartman Park in Lyme last weekend. I found some of the trees in this park to have interesting formations. The large tree trunks in this photo seemed to be growing directly out of a pile of rocks.

I was even more interested in the buzzy calls that I heard coming from the tops of the trees. It took me about half an hour to finally get a look at the birds that were singing. As I had hoped, they were Cerulean Warblers which is also a lifer for me. If I had not heard them singing, I probably never would have noticed them. They stayed well hidden in the foliage. It was nice to find them on their natural breeding grounds and that I was able to find them without having another birder point them out to me. The quality of this video is very poor but it serves as a confirmation of my sighting.
-
What was your most recent lifer?
Posted by Larry at 10:57:00 PM

What a great trip Larry! Love the huge moose and all the warblers you saw/heard.

Wow, Larry, what a great trip! I would have been thrilled to see the moose and a Cerulean Warbler too.

My most recent lifer was a Short-Eared Owl in North Dakota.

I'm no longer sure what a "lifer" is & I never had a firm grasp on the concept, to begin with (unfortunately.) I've read in different places that it means completely opposite things. Instead of worrying about it, I just enjoy the birds. :)
I've heard that fungus you're asking about is called "turkey tail" fungus, but I saw it called something else (I can't recall,) in a field guide, too.
It seems that everything is relative! *L*

Very nice - I still am moved at seeing bald eagles in the wild as we came so close to losing that opportunity.

My most recent life, alas, was two years ago: A bay breasted warbler I saw on a bird walk in a local park. I think this is a sign I need to get out more.

Stunning birds and I am lucky to hear the Pizza call on a regular basis here!

Larry, I don't know who the "fun guy" is but he sure is artistic! My most recent lifer was a montezuma quail. Looks like you had a fun and productive walk!

Jayne-Thanks-The moose was the only thing left from my New Hampshire trip. Everything else was local sightings from Portland/Middletown CT.

lana-Thanks for identifying the mystery fungi. Lifer basically means the first time you see/hear and identify a new species.-People then add it to their life list.-I just use the phrase to point out that I saw something new which is usually exciting for a birder.

wren-Nice bird to see.-the nice thing about not getting out more often is that it must be a lot of fun when you do go birding.

Monarch-Don't tell me that you work at a pizza restaurant too!-You sure are busy!

Kathiebirds-lol-I hate using the word fungus for some reason. The birds you see over your way aren't even familiar to me. At least I know where to go when I want to see new species.

Mosquitoes are very bad this year here. I have only seen 2 of the birds you list in this post! My last "lifers" were seen around the water in NYC in early June. But we are going up north next week and maybe I will find some of those migrating birds who flew by my home at night this spring.

Larry, was the eagle in New Hampshire or did you see that in Connecticut. What a great hike you took. My husband and I like to hike - looks like we should head North!

Great post! You've been out there seeing so many things! The eagle shot is FANTASTIC!!! Glad you're enjoying the summer. :)