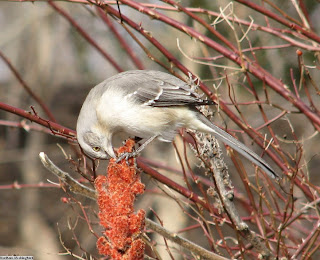 I spent my morning on Saturday searching for birds in the Durham area. As I was driving along, I noticed a large flock of ducks swimming in a swampy portion of the Coginchaug River. Most of them were Mallards, but I could see a small group of Wood Ducks, including two brilliantly colored males. I was excited at the chance to finally get a decent photo of a Wood Duck but I would have to sneak up on them through some brush in order to accomplish that. I wasn't two steps into the woods before every duck in the area had taken to the air and disappeared. This sort of thing happens to me all too often.

It was that moment I remembered an article by Mike Atkinson. In part of his article he used the term "soft targets" -birds that are easy to photograph. I decided that for the remainder of that morning, I would only take photos of birds that were willing to pose for my camera.

My first subject was the Northern Mockingbird in the top photo. Mockingbirds are notorious for protecting their winter food supplies. Once they've found a bush full of berries, they will stick to it like glue. When I moved closer to the mockingbird for a better photo did it fly away? No, instead it gorged its mouth full of sumac and then hid in the center of the bush. It seems that the mockingbird was worried about me getting at his food source! 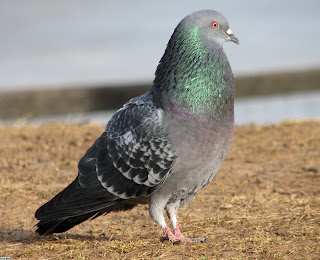 My next stop was at Lyman's Orchard in Middlefield. They have a man-made pond that is always loaded full of waterfowl but it was the pigeons that first caught my attention. I enjoyed watching some of the courtship behavior of the male pigeon.

click to play
This male pigeon is performing a courtship display called bowing in which he puffs up his neck feathers, drops his head down, and turns around in circles. I think it is also doing some tail-dragging . This is when he fans out his tail and drags it on the ground while following close behind a female. I was surprised to learn that Rock Doves mate for life. 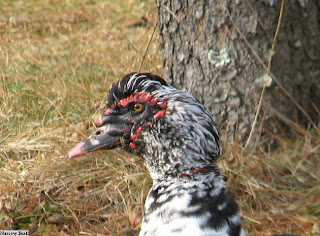 Most of the waterfowl at Lyman's Orchard is comprised of Mallards and Canada Geese. There are large numbers of these birds and occasionally reports of interesting species such as Cackling Geese. There are also a number of domestic species that can be seen here including Graylag Geese, funky-colored domestic mallards, and Muscovy Ducks. The facial pattern on the male Muscovy-(seen above)-is strangely unique. It looks like a chicken-duck to me. One thing I noticed about the pond at Lyman's is that there doesn't seem to be much of a mess considering all the ducks and geese that hang out there.They fence the pond in which helps but I'm thinking that someone must regularly clean the grounds. I'll have to ask next time I go there. They also have a nice country store called the Apple Barrel which has fresh fruit, baked goods and a great deli. There is a nice picnic area that overlooks the pond.

click to play
Here is a video of two male mallards fighting it out. One was clearly dominant over the other. This video actually contained another minute of footage but I had to trim it down in order for it to upload onto the blog. I can assure you that as brutal as this footage seems, the beaten duck flew away without any apparent physical injury. I have to wonder if anything is going through his mind after such a humiliating defeat though. 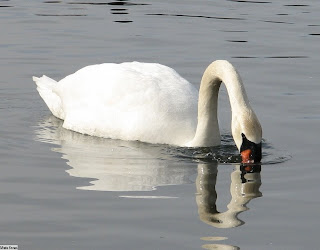 A drove a few miles down the road to Mckenzie Reservoir in Wallingford. Earlier in the Fall a Barnacle Goose was seen there by many birders. The reservoir, which is intersected by a road, had a small area of open water at one end. There was a nice mix of species condensed into a very small area which included Canada Geese, Greylags, Mute Swans, Mallards, American Wigeons, Common Mergansers, Hooded Mergansers, and Gadwall. 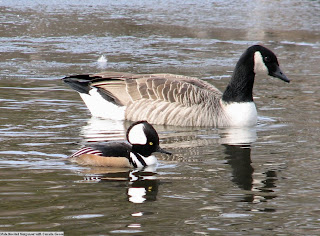 The Hooded Mergansers semed to be braver in the company of Canada Geese. 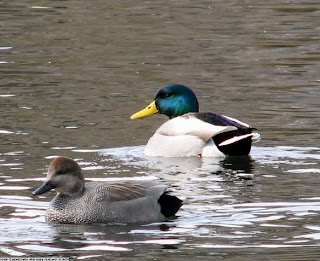 This is the first close look I've had of a male Gadwall (left). I saw a distant flock of them along the western shore in January but it wasn't until Saturday that I was able to see some of the subtle detail of their plumage.
-
I may have started out taking photos of "soft targets" but I was able to see a variety of species and observe some interesting bird behavior in the process.
Posted by Larry at 4:00:00 PM

Hi Larry,
Looks like you had a really nice day for birding. I really like that picture of the merganser with the Canada goose.
I must be feeding the birds too good in my backyard because I never see any birds on my sumac bushes and they're still all covered with the red seed heads.

Wonderful day and I have been finding many more birds in the Sumac as I have in years past! Great photos and videos!

Great shots Larry! I have a few Mallard photos to post later in the week. I was surprised to see so many males hanging out at the pond with no females in sight. Is that normal? I see there were lots of males at the pond there too.

Great pictures Larry. I LOVE the picture with the mergenser and Canada goose. It really shows the difference in size between the two species.

I too love the photo of the Canada goose and the merganser. I am bummed out I cant watch the videos..I am in a sort of remote area of Florida, St. George Island. and my ATT broadband card is working at about dialup speed...pages load slow..I see some photos..not all..
and no chance at watching a video..
Oh well..

Your pictures are great, and I like the soft target approach. One of my favourite pictures from last year was a pigeon on my knee.

Looks like you got some good shots after all. I'm glad you were out counting. I exhausted myself and am now trying to get caught up on blogging, housework, and sleep!

Ruthiej-It seems like they hit the sumac as a last resort-maybe after a warm-up or something.

Jayne-Good question-I don't know the answer but it might be worth googling to learn that.I will be more observant of male versus female numbers when I come across them.


dawn-too bad but I'm wondering if I loaded too long of a video anyway.-I get the feeling that others had problems playing it too.

Ruth-"A pigeon on my knee" It sounds like a title to a song.

Kathiebirds-I'm taking it easy with the birding for the rest of the winter.

...I really liked the videos. I'm not around pigeons very much and have never seen the bowing courtship behavior. Also, the duck behavior was intense!

kelly-thanks-I'm glad that you enjoyed the videos-I was surprised at the mallard behavior.-I've seen Geese and swans being very aggressive but I haven't really noticed mallards behaving that way although I'm sure it probably happens often.

Pardon the pun, but ducks are often flighty like that. I remember trying to sneak up on some with a friend years ago, crawling on our bellies. He said, "I feel like we're in 'Nam," at which point I cracked up & the ducks were gone.

Howdee,
I am finally in a high speed internet area with my broad band card.
Just watched the Mallard Video..
Yikes...that was quite a battle...glad the one got away safely.
Great video..I had no problem playing it with the high speed internet...

Lana-I've actually never tried that hard to sneak up on them.It seems the sneakier I try to be the more they're on to me.

Dawn-Glad you appreciated the video-I thought it was some pretty interesting, albeit brutal, action footage.

The bottom shot with the gadwall is excellent.

Mathew-thanks-I was glad to finally get a nice view of a male Gadwall.