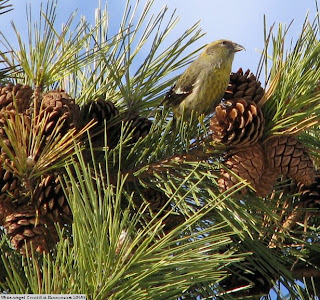 Saturday was my last chance to add to my January list. I met up with a group of birders at the commuter parking lot in Chester for what we called missed species trip. Our plan was to make several stops along the shoreline between Old Lyme and Stratford until we ran out of daylight. The morning started out on a good note when I was able to add Purple Finch to my list at our very first stop. Hammonasset proved to be a worthwhile visit. There were loads of people there to watch a charity event which features swimmers taking a plunge into the ice-cold water. Too bad I was busy birding, or I might have joined them. It was during an extended visit to the rest area at Meig's Point Nature Center that we saw an American Bittern fly across the parking lot into a nearby gully. That was a bird that many of us needed for our list, including me. We made a stop at Meig's point where we were able to find a few Purple Sandpipers at the end of the jetty. 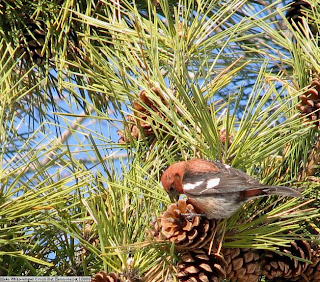 It was during a lunch break in the West beach parking lot that I spotted these White-winged Crossbills having a lunch of their own. Even though I didn't need this bird for my list, it was nice to finally get a close up view of them. The top photo of the female shows a little bit of her crossed bill. The bottom photo of the male shows the overall red coloring . The wings are darker with white markings on them.

click to play
Somehow, I felt that the sighting of these birds was a sign of good things to come. When I saw them last week, they were gone as soon as they sniffed the pine cones , but on Saturday they just couldn't seem to get enough of them. I'm looking forward to spotting some more at some other unexpected location during the winter. One way of finding them is to look for bits of cone debris falling from coniferous trees in an area where you suspect they may be. In the video, you can hear some other birders conversing. You can hear our trip leader joke that the lone male crossbill had a harem after a second female showed up. 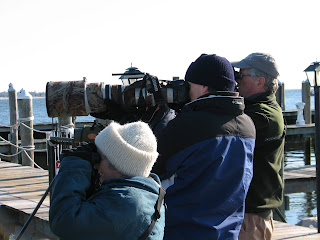 I forgot exactly where this spot was, but check out the mega- lens on that camera. The photographer also used the lens to spot his birds. I'm hoping he may send me a photo of a Red-shouldered Hawk he took during our trip. It was taken from about 100 yards away. I'm curious to see how it came out. 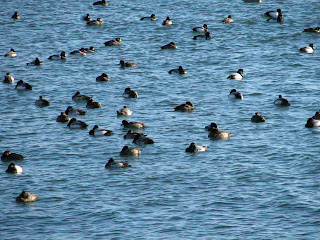 After lunch, we worked our way towards New Haven. On the way down, I saw a flock of Wild Turkeys grazing on the side of the highway. I tried to get every one's attention but it was difficult to do when we were traveling 75 miles-I mean-65 miles an hour along I-95. That was one of the target species that I was able to add to my list. I was disappointed to have missed Common Grackle and Yellow-bellied Sapsucker for the month of January. I guess I just wasn't in the right place at the right time.

It was at a stop in a restaurant parking lot in New Haven where we saw all of these scaup in the photo . We also had a surprise sighting of 4 Greater Yellowlegs just down the road from there. In a way, I guess you could say that we saw 8 yellow legs since there were 4 birds and each had 2 legs. We missed out on finding a Black-headed Gull or a night heron, both of which we were hoping for.
I must say that it has been a long and challenging month of birding for me. If it weren't for the fact that I like birding so much, you could say that these all-day birding marathons were like a hard day of work. From dawn to dusk you have to drive, set-up and move on constantly. The weather was very cold and our breaks were very short. As I said though-if I didn't like birding so much. One of the guys in the group called it microwave birding (done in 2 minutes). That was kind of the joke for the day. I could tell that he was anxious to make use of his new scope but there were some stops that he didn't even have a chance to look through the eyepiece before we were off and running again. 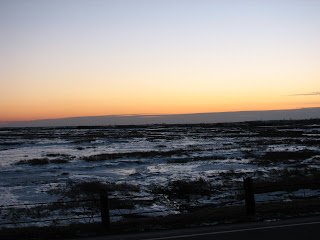 I'm not going to get into the specifics of all the birds we saw total number of species for the day was 66. It was at dusk that I recorded my final species for the month of January. A flock of Boat-tailed Grackles landed in a tower at the airport in Stratford, just as the sun was setting. This was a lifebird for me. The photo is a view of the marsh just across the road from the towers where the grackles landed to roost for the night. What a magical way to end the month of January. Thanks to all of you who joined me in participating in the birding tradition known as "Big January." I hope you all enjoyed it as much as I did.
Was I able to exceed my total species count of 94 from last year? Did I reach that magic number of 100 species seen during the month of January in Connecticut? Is it possible that I was trying to lull Kathie of Sycamore Canyon into a false sense of security by suggesting that I had no chance of topping her January species count and then surging ahead to take the lead on the final day? --hmm.. that would be an interesting turn of events-wouldn't it. Maybe it's just best to leave the answers to those questions to your own imagination. After all, it's just a game-right? But...For those of you who really feel the need to know,- click here
Posted by Larry at 6:00:00 PM

I would be so excited if I could see both crossbills! Thanks for the tip on looking for pine seeds under trees. I have been trying for two weeks straight to get a look at these birds and to no avail.

I can't get over the size of the lense. How can he carry it around??

And now you are going to make us wait to see if you made you goal!! I am sure you did but I will be back to check. ;o)

Those crossbills have been teasing me and I have not been able to get any good photos (or video's) of them! Bravo job!

Kallen-It's like hauling a scope around I guess.-Keep trying for crossbills.-They've just started to increase in numbers here in CT.

Fun blog! I'm always happy to see someone blogging about my hometown of Stratford.

Wow Larry, that was SOME day!

Larry, I am so tired of birding! I need to take a break, yet I still can't leave the house without my bins! I'm doing a wrap-up post for tomorrow (or the next day). Congrats on 100! That is so awesome. You certainly had worse conditions to bird in than I did! What I want to know is: How did you do that wih the link at the bottom of the post? How did you keep that page hidden?

Kathie-Thanks-I went to post options and backdated it. I also took off the last two days from birding although I did have my bins today but only lifted them once or twice.

I wrote a long comment yesterday and couldn't log on to post it. I predicted you had reached 100 birds. I enjoyed the Big January count very much.

Larry,
Congratulations on your Conneticut January Century! Congratulations on the Boat-tailed Grackles lifer! Isn't this Crossbill invasion crazy? I've had them as yard birds. Never thought I would see that in PA. I've been filling up my January with a different birding routine. I've been involved with the Mid Winter Bald Eagle Survey, and the Winter Raptor Survery. I'm a sucker for day counts. Or even better, a 4 day count, as the Great Backyard Bird Count is coming up in February.
Take Care,
Vern

Hi Larry,
Congrats on your 100 birds--that's amazing but you worked pretty hard for that number. Thanks for sharing the adventures with us.

Your pictures of the crossbills at the beginning of this post are extraordinary--I love how the sun is shining on the evergreens and the contrasting colors of the birds against the green needles.

"Way to go", on breaking the century mark for January. You have some nice birds on your list.
Cheers
Tom

Hi,
Looks like you got a nice month of January. Congrats for the 100 species!! That's a record.. And finally the crossbill pictures are really nice...

Ruth-I was doing a lot of shuffling around and updating of the blog yesterday.-Maybe that affected your ability to post a comment.-I reduced the number of posts shown from 7 to 3 in hopes to speed things up a little.

Vern-yes-I hope to see some crossbills in an unexpected place instead of just hammo.Sounds like you're keeping things interesting-thanks for checking in.

Ruthiej-thanks-I thought that I would have had better photos-the little birds keep burying their faces into the cones.-When I see those big lenses I think to myself-money matters.

Congrats on the 100 species in January!

The irruption this year is the largest and most widespread that I can ever remember.

I knew you would not fail. Congratulations, Larry! I wanted to participate and even made a feeble attempt at making a list, but... being too busy and not getting out enough. Maybe I saw 30 species in January but don't hold me to it! :o)

Larry, I've posted the updates and the totals on my blog. Though I saw 2 more species of birds I also had to make an adjustment, so the final total for me is 107. It was a lot of fun but I was worn out by the end. You did really good job. Bruce SC may join us if we do this next year and she says she will beat us all!

Larry!
Awesome birding! Hope you are resting ... or perhaps you are up for a big February?

I know that sandpipers are endangered. I went to Cape Cod at Provincetown a few years ago and they said the dunes were off-limits because of the sandpiper's nests.