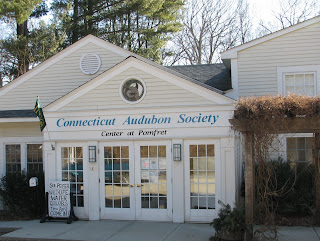 One of the most beautiful areas to visit in Connecticut is the northeastern corner of the state, also known as the "Quiet Corner". It comprises the largest portion of The Last Green Valley, a relatively undeveloped area between Boston and Washington. The region is known for its scenery, culture, historical museums, and numerous antique shops. There is another good reason to visit this area, and it is the reason that interests me the most, Birds!

The Quiet Corner is loaded with lakes, ponds, farms, and forests. For this reason, my first stop was to The Connecticut Audubon Society Center at Pomfret. I was able to get a lot of helpful information with the free brochures that were available. The staff and volunteers at the center were also very helpful in providing me with information beyond what was provided in the brochures. 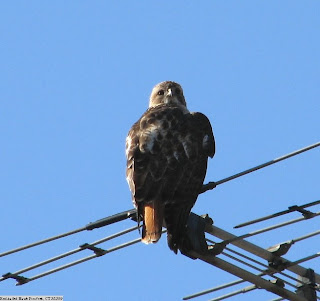 As I was standing in front of the Audubon Center, I saw a hawk perched on a nearby antenna . At first I thought it might be a fake bird set up as a practical joke to trick people but closer inspection revealed a Red-tailed Hawk taking in a birds eye view of the area. During my visit I saw numerous Red-tails. You know the saying a car for every garage. Around here it should be a Red-tailed Hawk for every farm field! 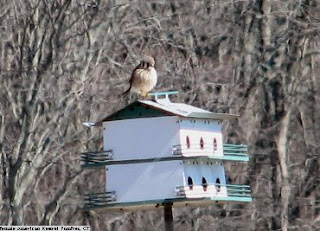 My favorite birding moment of the weekend was my sighting of this female American Kestrel. The sign at the Bafflin Nature preserve that stated kestrels usually return to the area some time in April so this one was a little ahead of schedule. As you may notice, the box on which it is perched is not an American Kestrel Nestbox. I was disappointed when the it flew off because I was hoping to get closer for a better photo but...

click to play
My disappointment quickly disappeared as the kestrel put on a thrilling aerial displays! I have seen kestrels hover hunt briefly on a couple of occasions but never like this one did. She flew up into position and hovered in one spot for as long as 45 seconds at a time while searching for prey below. This video doesn't fully capture the moment but it gives you an idea of what I witnessed. Half of the video has been edited out so that I could upload it onto the blog. I also muted the audio because the sound of the wind was too loud. 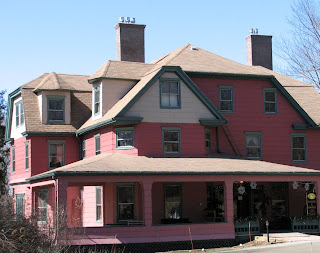 I was on my way to get some lunch when I noticed this unusual building with a sign that read Celebrations Gallery When I passed by this building my curiosity got the better of be so I pulled in to take a closer look. Inside there were very large rooms filled with bright, colorful paintings and interesting sculptures. I'm not one to spend a lot of time admiring art but I couldn't help but be impressed with what I saw. 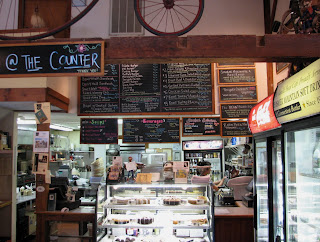 I had lunch at the Vanilla Bean Cafe. Their philosophy is to never compromise on the quality of the food. They try to use locally grown products from the numerous farms in the area whenever possible. I really like the idea of using locally grown products. It's nice to know where your food came from and I'm sure the local farmers appreciate it too. I had half a veggie sandwich on homemade bread and a cup of clam chowder. Everything in the sandwich was so fresh tasting and flavorful too. The clams in the chowder were nice and tender with a broth that was somewhere between Rhode Island and New England style. The dining area was very relaxing with wood floors and high ceilings that made it feel very roomy. The dining area is decorated with the paintings of local artists and the cafe features musical entertainment on a regular basis.
-
In my next post, I'll tell you about the rest of my adventures in the Quiet Corner including a visit to an interesting nature preserve which was the former homestead of a Pulitzer Prize winning author and naturalist-any guesses on who that might be?
Click: here -to read Birding Connecticut's Quiet Corner Part 2
Posted by Larry at 7:41:00 PM

I can't believe I have lived in that area for so long and haven't been to the Vanilla Bean Cafe. I heard that Paul Newman and Joanne Woodward went there a lot.
I recognize that pink building. I have been in an old cemetery that's in the woods near there.

I looked at Wiki and it says Putnam and Woodstock are part of this region?? If so, I live only 20 minutes away from Putnam. I am going to have to look at this more. Very excited to have found a new place to bird. Thanks Larry!

Christine-You picked a nice part of the state to live in. I really like the region and do recommend visiting the Vanilla bean Cafe-

Kallen- It is a nice area.-I especially enjoyed some of the less developed reservoirs and the nature preserves. The areas I visited were in Hampton, Killingly and Pomfret for the most part but Woodstock should be ineresting s well-Putnam is the only real city in the area I think.

Love the kestral on the martin house and your video is terrific!
I've never been able to get video of flight- very cool.

The Am Kestrel is one of my very favourite birds. I have seen them here all winter. They must be migrants from further north, or perhaps some stay all winter. Nice video. The warmer weather does make birding more enjoyable as the birds are more plentiful and active.

Sounds like you had a good day. Love the Red-tailed Hawk photo!

Did you go to the home of Edwin Way Teale? I bought his book, "A Naturalist Buys an Old Farm" when I was living in a hotel in Massachuesetts. I read the book and was surprised to find out he bought an old farm in the Pomfret area. Since I lived in this "Quiet Corner" for several years back in the 1970's and '80's I was surprised to find out about his place, since I had never heard of it. I have yet to visit the farm thought I want to. I passed by this Audubon Nature center several years ago when I was in the area for a friend's weddding. Kudos to you for getting out and about so much. I am ready for another nature adventure myself!

Lynne-I was very excited to be witness to that.

Ruth-You are fortuate to have a lot of them.They are fairly scarce in CT.

Kathiebirds-Very good-you are correct.It is a really cool place to visit although I didn't take may photos there because I was running out of time.

Thanks for taking us along on your field trip, Larry. I really enjoyed this. If only I lived in a Quiet Place!

Hi Larry,
A wonderful post with wonderful pictures of this hawk... I saw a common kestrel in Paris, or many I should say but it was really hard to get nice pictures.

Kestrels are cool birds. Fun to see him stalk that martin house.

Chris-We don't have many in CT.Their numbers have diminished while I'm actually seeing more Peregrines lately.

Zen-Maybe she's waiting for lunch to be served.

Larry, your photo of the hawk is stunning. I don't know much about birds {other than what I pick up here and there and see on Mary's blog} but the hawk has such an innate sense of majesty.

Larry...
thanks for giving me all these places to visit...
We will be visiting my family in Ledyard,Mystic area in June..July.
and will check out some of these places you mentioned..the Vanilla Bean Cafe looks great.
Liked the Kestrel video...and the pic of him on the house that wasn't his..is that a purple martin house?
Cant wait to get to Ct. to check out these places you have mentioned.

Oh...just a suggestion..but only for my selfish reasons..
A quick link for your blog would be nice..
so if i want to track back to say...
ct. birding spots you have been to..
or specific birds etc..
it would be easier for me to find.
anyway just a suggestion..
I am going to bookmark this particular post so i can check out these places.

Thanks for the tip on that Gallery. I've bookmarked their page & will contact them at my earliest convenience (now to build a time-making machine...*LOL*)

Joy-Thanks-I think a lot of people are drawn to Birds Of Prey in general.They do have that look about them.

dawn-I plan on trying to set up some links of that sort when I get the time.

Ill be back. Great post and thanks for your comments on my place.