Small Discoveries Along The Road To Spring 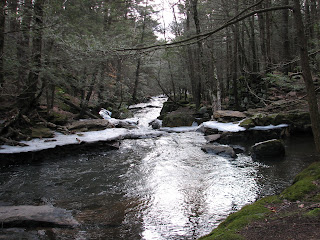 As Winter continues its hold on Connecticut, I continue to wander about the roads in my area looking for new places to explore. My most recent visit was to a place called Pine Brook Falls Preserve in East Hampton CT. I learned about this location recently from a weekly Hartford Courant column called Nature's Path by Peter Marteka. This is a great source of information if you are looking for new places to explore in Connecticut's woods.

click to play video
This waterfall is part of the remains of an old stone mill. There are 40 acres of land preserved at this particular location but it is only a portion of 762 acres of protected land along Pine Brook. There is more information about the overall project in the 19th edition of the Middlesex Land Trust Newsletter (pdf). The area is surrounded by a steep hillside, mountain laurel, and moss covered rocks. What impresses me about this area is that it only takes a two minute walk down a trail to reach an area that feels totally secluded. It would be a perfect place for a writer or photographer to spend some time. In fact, I passed two older gentleman heading into the area with their photography equipment as I was leaving. (preserve is on Sexton Hill Road in East Hampton-dirt road off of 151-park in front of small preserve sign).

There weren't many birds around during my visit but one little chickadee told me that if I came back in the May he would show me where all the warblers were hiding. He made me promise not to take his picture in order to protect his identity. I'm looking forward to sitting next to the stream on a warm, sunny, morning surround by colorful Spring migrants but I'll have to wait a bit longer before that moment comes. 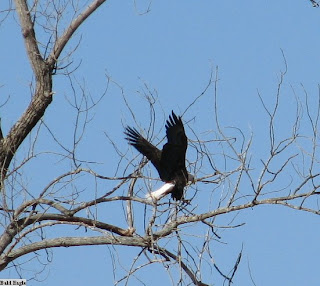 As the temperature dropped and the wind picked up, I decided to do some birding by car. I made a stop along the Connecticut River where I spotted two Bald Eagles. One was an immature eagle that had been sitting next to a skating pond while the other was an adult which was perched in a tree. It flew off a few seconds after I arrived. 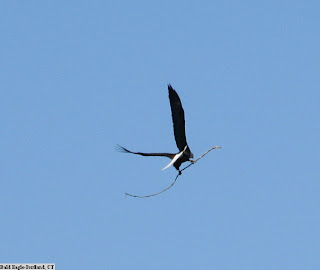 I noticed that it appeared to be carrying a stick in its talons. That's one less that our town workers need to take care of. I wonder where it's bringing it? 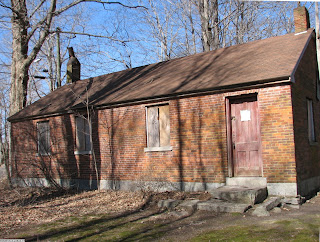 I took a drive through the Penfield Hill Road area of Portland. I believe that this tiny building is actually an old school. There is still an old water pump and a double outhouse made of brick located behind the school. After some searching, I found the following excerpts of information in an old historical record of Middlesex County:
I like reading old historical records and find the style of language they used back then to be interesting as well. Often times I find remnants of the past while searching for birds of the present. 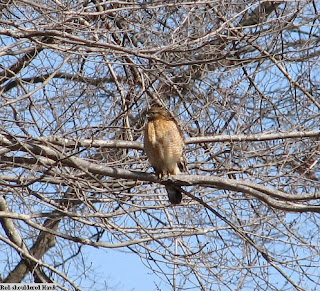 After my short visit to the school I came across a flock of turkeys in the woods and this Red-shouldered Hawks perched in a tree. From what I understand, Red-shouldered Hawks used to be rare in Connecticut during the winter. I've been seeing them fairly often this year, especially in the Haddam/East Haddam area. I found it interesting to learn that Red-shouldered hawks and Great-horned Owls are known for snatching nestlings from each other's nests.
-
I 'm certainly eager for the departure of winter and looking forward to the arrival of Spring. In the mean time, I will continue to wander down roads and trails enjoying small discoveries along the way.
Posted by Larry at 8:07:00 AM

I too am looking forward to spring. I am running out of things to blog on! Plus I want to see new species and flowers, etc.

Love the picture of the eagle and the red shouldered hawk. That old school house is no wonderful to look at. They just don't make buidlings like that anymore.

Looks like a nice little area you found. I might just have to check it out when I visit with my family in Ct.

So the Owls and Hawks steal hatch lings?
I assume to eat not to raise?

Kallen-I am ready for Spring too.I just miss the variety of colorful birds and nice weather.

Dawn-No-I think they actually just take turns babysitting for each other.

That chickadee sounds like a great guide! Does he have any relatives or friends here in Minnesota that would be available to show me the warblers?

Lynne-As a matter of fact,yes. Look for the one with the black cap that answers to the name Pete.-Oh yes-also, he has a small scratch on the left side of his bill-you'll know him when you see him.

It will be fun to hear about what the Chickadee shows you in the Spring then. I am sure he will keep his word since you kept your word too.

I love watching the eagles bring sticks to their nests. It seems to lead the mind towards creating something new in one's life.

Thanks for the visit Larry.

Natural Moments-I have an idea of what type of warblers I might find there but I don't want to jinx myself.They sure do a great job of maintaining their nests each year.-
Interesting thought about leading the mind towards something new in one's life.

...very interesting and lots of information. Loved the waterfall video and the photos of the eagles. They are kind of hard to find around here, but are slowly becoming more numerous.

A wonderful trek Larry. Love that you got to spot the Eagles! I am green with envy. :c)

A wander looking for new places to explore. Now that's my kind of thing tool. You had a good one that day.

Nature's Path is a great column, I agree. The stream and falls you photographed look really beautiful. It is always great when you find something new.

Kelly-Thanks-It's nice that eagles have come back so well. They are part of our history and a wonderful bird of prey to watch.

mathew-thanks-I hope Nature's Path contines.With all the papers closing down you never know.

Looks like a wonderful place to hike and see birds. I hope that chickadee keeps its promise! I am amazed at seeing all the Bald Eagles in CT. They were practically nonexistent there when I was growing up!

The road to spring...I like that. There is nothing much changing here with our birds now because of the very cold temperatures and north winds. I watched an osprey build a nest near the hospital last spring. It broke off many branches on the trees around the property and carried them to the river. It dropped 50% of them en route, but did manage to build a good sized nest in the end.

Hi Larry,
You are amazing... This text plus this nice pictures, your blog is a complete nature story... Just like a book. I love it!!!

All us northerners are desperately awaiting spring. It's not here yet either.
I love the picture of the eagle with the stick in its claws. Amazing. I assume it is nest building?

Beautiful beautiful photos, Larry! And the sun was shining. I would love to take a walk along that creek.

kathiebirds-It's great to see all of the Blad Eagles in CT these days.-Don't worry, chickadees are very trustwothy.

Ruth-dropped 50%? Sounds like you are quite the observant birder.

Sarala-Actually in this cae, I think it is just doing some maintenance.The nest in this particular spot has been there for a few years.

Patrice-It is a nice spot-I'm sure that you have your own magical locations out in Washington just waiting to be discovered.