Making The Transition To Summer Birding 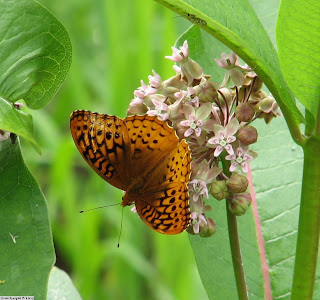 The last couple of weeks I've felt as though I've just been going through the motions while I've been out birding. The weekends have been cloudy and raining leaving me with dozens of bird photos that might as well have been taken with the lens cover still on. The increasingly dense foliage has made viewing birds in woodland areas much more difficult. This weekend marked the official start of Summer. I made the decision not to dwell on the negative aspects of my least favorite season but instead, try to appreciate what each moment has to offer.

Butterflies: I saw plenty of butterflies this weekend but they seem to know that I'm coming at them with a camera often flying off just at the moment I'm ready to press the shutter. Two of them were kind enough to stay still for me. The first was a Great Spangled Fritillary seen in the top photo... and the other was this American Painted Lady which was resting on a pebble path.
-
Field Trip On Saturday: I met up with a few birders at 6:30am to co-lead a field trip. Our first stop was at Hurd Park in East Hampton. One of our objectives was to search for Hooded Warblers which was a lifer for one of the birders. We were in luck as we found several which seemed to fly back and forth across the path stopping to sing from various locations. After we were satisfied with our views of the Hooded Warblers, we decided to take a short ride down the road to Machimoudus Park. There seems to be a greater variety of birds there and the habitat is more open making it easier to locate them. By the end of our trip we saw or heard ten species of warbler including: Hooded, Worm-eating, Common Yellowthroat, Pine, Louisiana Waterthrush, Blue-winged, Prairie, American Redstart, Ovenbird, and Black-throated Green. 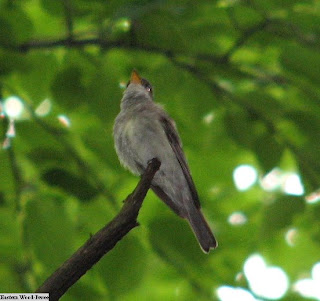 There were a few flycatchers including : Great-crested, Eastern Wood-Pewee, Eastern Phoebe, Eastern Kingbird, and one that was sitting on a nest with its head peaking out. We had some difficulty in trying to figure out which flycatcher it was but did take note of the fact that it had an orange lower mandible. I noticed in one field guide that Willow Flycatchers have an orange lower mandible. The following day I tried to take a photo of a Pewee which didn't come out to well but guess what? If you look closely, you can see that the lower mandible is orangish in color.
-
The nice thing about birding with a small group in the summer months is that there is no reason to be in any hurry. If you want to stop and search a little longer for a specific species or take time to study an individual bird a little closer then summer seems like a good time to do it.
-
Here are some of the other highlights of our trip: A singing Scarlett Tanager perched out in the open for all to see, nesting male and female Baltimore Orioles, Osprey, Red-shouldered Hawk, Chimney Swift, male and female Indigo Buntings, Eastern Bluebird, excellent views of Wood Thrush and Veeries, Barn Swallows, Ruby-throated Hummingbird, Rough-winged Swallows, Tree Swallows, and a flyover Purple Martin. 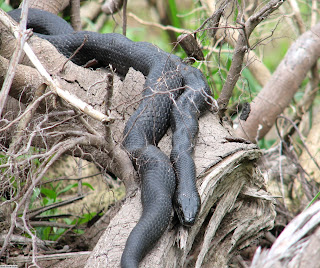 We came upon this snake that was resting upon a brush pile. Someone identified this as a Black Racer Snake. Unfortunately, many snakes are unnecessarily killed by people who are afraid of them. 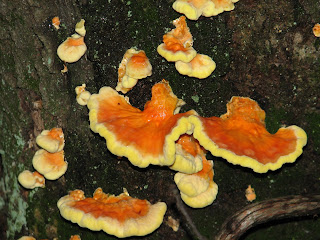 On Sunday, I drove through Meshomasic State Forest. It was raining off and on so I rolled my windows down to do some birding by ear as I traveled down the dirt roads. At one point, I had gotten out of my truck to track down what turned out to be a singing Black-throated Blue Warbler. As I was walking towards the woods an older gentlemen pulled up next to me and asked me what I was up to. It turns out that he was concerned that I might have been after these mushrooms which he had staked out earlier in the week. He seemed quite relieved when I told him that I was only looking for birds, not mushrooms. I don't know the name of these mushrooms but he did tell me that they taste like chicken.

click to play
Mystery Warbler Song: I heard this warbler singing in Meshomasic Forest on Sunday and couldn't figure out which species the song belonged to. It was too deep in the woods for me to chase it on such a rainy day so I decided to just record it and then try to identify it later. After searching through a bird song CD I decided it sounds like a Canada Warbler. Do You agree? I thought that was pretty interesting. I didn't expect to find a Canada Warbler in Portland this time of year.
click to play
I was able to record this Eastern Wood-Pewee in the midst of calling out its song. It reminds me of someone hailing a cab. I like the way it looks around and contemplates the right time before letting out its piercing whistle.

click to play
The color of this male Scarlet Tanager manages to show through even though the video was taken on a cloudy day in a shaded tree. It is calling out its two note song-chick-burr , ca-ching or whatever else you want to call it. I make up my own description of songs because they often sound different to me than what is described in the field guide.
-
This weekend was all about paying close attention to birds songs and observing details that I might normally overlook. I'm looking forward to see what next weekend will bring.
Posted by Larry at 7:20:00 PM

Very nice photos and thanks for your comments about not harming snakes. They are a very necessary part of nature.

The snake is harmless to us, but will do a great job feeding on eggs and chicks.
And what is all this about summer, what summer?

Hmmm... I can't make that song anything else. I do hear a bit of that initial chip of a Canada's song.

A Canada Warbler! How cool is that. I am so with you on the transition from May to June. I have learned to accept it though and have your train of thought too. July will be worse so I am going to try and learn more about butterflies and trees while I am out birding.

Your summer butterflies are beautiful. The snake is not, but I wouldn't kill it (or be anywhere near it)

Whitemist took the words out of my mouth.

Neato! I feel the same way as you do about summer birding. It's just weird.

Ohh..where are those mushrooms now???
they are sooo delicious! Best picked when soft and fresh..chicken of the woods.
I enjoyed the videos especially the pee wee video...cool

Craig-I edited out my Snake 'N Bake joke after you commented but thanks for checking in.

Whitemist-Summer in terms of birding-Nesting Season-lots of foliage etc.-I know it hasn't been particularly hot but anything over 65 is too hot for my tastes.-Snakes do eat eggs etc but every animal has to eat something.

Patrick-It still bewilders me that birders can differentiate between species by chip notes.-I can usually recognize a cardinal or a bunting chip but all those warbler chips-forget about it.

Kallen-I think it's somewhat uncommon to find a Canada on breeding grounds in my area right now.

Dawn-I'd like to try some of these mushrooms but I'm afraid I'll poison myself.

Even with the rain and foliage, still a really great mix of birds Larry! :c) Love that the dude was scared you were there to fight him for 'shrooms...lol.

Hi Larry,
Very nice shots and message. One picture got me nervous, the snakes!! I hate them!!!

Larry, I am in your neck of the woods this week and out birding where I can. I am car-less, which makes my trips limited to whatever is within walking distance or wherever my family takes me, but I have been able to squeeze in plenty of birding anyways. I saw a worm eating warbler at Lake Hayward and plenty of birds at the Lion's pond on Halls Hill Rd in Colchester. I'm on my way to Maine next but hope to blog about it all soon! I'm tired of all this rain though!

You did pretty well with the birding considering the weather. My week in Maine turned into a nonbirding week. Hope we can clear off the mildrew in the arm joints soon. I agree with your Canada Warbler song - listened to your recording and the stokes on my ipod - seems the same. Not one I hear often.

Looks like an Eastern Racer to me. I had one as a pet for a short time (2 days) until my mom found out and made my dad give it away. It was about that same size- probably 5' long.

Your list is very impressive for late spring/early summer! I can't remember the last time I saw a warbler...