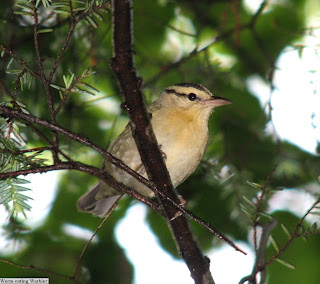 I spent this weekend exploring the area of Middletown, which lies east of Route 9, also known as Maromas. It represents almost 38% of the city's land area but only 5% of its population. There is plenty of great habitat for birds and other wildlife here, including flood plain, streams, riparian corridors (including Hubbard Brook), reservoirs and wetlands. There is another notable feature of the landscape in Maromas; rocky hillsides. Worm-eating Warblers prefer this type of habitat and I found many of them while hiking through these woods. The bird in the top photo came out to let me know I was getting too close to its nest, so I moved along quickly.

The Worm-eating Warbler is sometimes overlooked because it is not flashy like some of the other wood warblers. It has a buffy breast, along with black crown stripes, and a stripe through the eye. It's song is a buzzy trill, similar to a Chipping Sparrow, but is described by Peterson as being thinner, more rapid, and more insect-like.They are sometimes easier to hear than see and I've seen them skulking low in the undergrowth. I don't think the Discovery Channel will be contacting me to use this footage but it gives you an example of what they sound like. This particular bird seems to have a trill that is a little more metallic sounding than some of the other WEW's I heard this weekend. 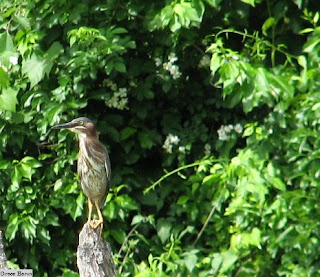 I spent most of Saturday morning following the railroad tracks along the Connecticut River. I came across this Green Heron as I passed by a swamp filled with noisy frogs. Do you think the heron knows the frogs are there? 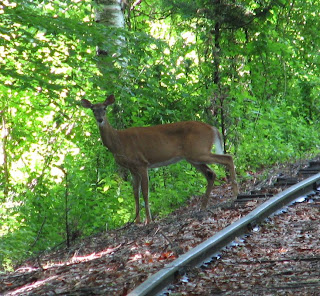 I counted 7 deer during my hike. This one stared at me for several minutes as I walked toward it. I wonder if it thought I was a train? My favorite deer sighting was when one leaped out of the wooded hillside and landed on the other side of the tracks. I didn't see the take-off or landing so all I saw was a deer floating silently through the air. It probably only took a second but it seemed to be suspended in time. Definitely a moment to remember. 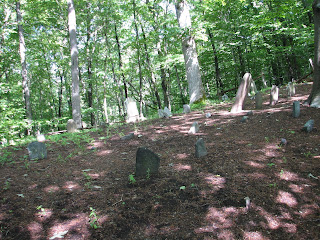 Another surprise was finding this miniature cemetery. It was in the middle of the woods, set high on a hill overlooking the river. Most of the headstones were broken and the remainder of the graves were marked by rocks. What was a cemetery doing out in the middle of nowhere? I think one of the graves had a date from the 1700's but it was too worn to tell for sure. I felt like I was given a secret glimpse into the past. 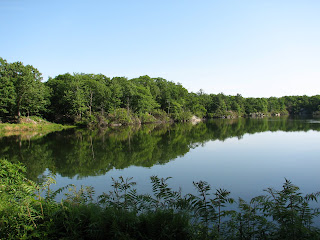 On Sunday, I walked following the Mattabesset Trail to a blue and yellow trail that loops around some reservoirs. The trails can be tricky here, so I was reluctant to go too far. This is a photo of Reservoir #2 off of Brooks Road.
-

About a mile into the trail I found an Eastern Wood-Pewee attending to a nest but it seemed to become aware of my presence so I stayed away from the nest until I left the area. I had a quick glimpse of a hummingbird, checking the flowers on a bush that was below me. I assume it was a Ruby-throated Hummingbird, but you never know.
--

I came across an interesting cave when I accidentally took the blue trail instead of the blue/yellow trail on my way back. Now I wish that I had taken a picture of it. Upon doing some research, I found out that the legendary Leather Man used to travel though this area. The Leather Man was known for traveling a circuit of 365 miles every 34 days through Connecticut and New York. He stayed in caves at night, including one that was in the Maromas portion of Middletown. This started before Lincoln was president and continued until 1889. I wonder if he had an interest in birdwatching? You can read more about the Leather Man here. It seems they still haven't figured out all the facts behind this legend. If you are from the area and interested to see the actual location of the cave, there is a hike on June 13th, which you can read about here on the Middlesex Land Trust website. 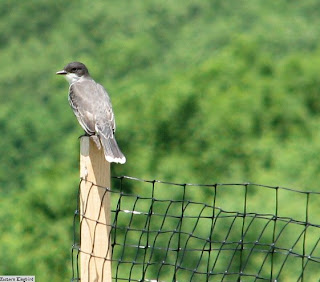 I came across a couple of bonus birds as I was heading down Aircraft Road back towards Route 9. First, I saw a Common Raven foraging on the ground along side the road. I also made a brief stop at the Cockaponsett Forest parking lot, which is on the same road, and saw a pair of Eastern Kingbirds (above) perching on posts near the field. It was a nice way to end my birding for the weekend.
-

That Worm-eating Warbler photo is terrific!! I got a quick look at my lifer WEW in WVA. I think your video is great too. I'll have to listen again. Not sure if I can tell it from a Chipping Sparrow.

The lake picture is so serene. I'd like to pull up a chair there and watch a while.

Love the Worm-eating Warbler video Larry! That was one bird I wanted to see this spring but didn't unfortunately. In fact, I had a dream I saw one last week. HA. It's funny about the metalic despcription because that's how I tell myself the difference between a Chipping Sparrow and a Pine Warbler usually. Now another one to confuse me if I ever get lucky enough to hear it.

Love the story of the Leatherman. It reminds me of one of my favorite authors Peter Jenkins who hiked across the south in the 70s and would camp out at night or stay at good samaratins houses. Such adventure people like this must have had!

Lynne-That's saying a lot considering your recent run of superb warbler photos.-I stood still for a while to get this one.Next time I'll try sitting down.

Kallen-Thanks-I'm surprised someone hasn't dressed up like the leather man and tried to imitate his route.

The Green heron is just divine! Interesting story about the Leather Man--another reason I love all of the blogs I read--so many interesting things to learn about!

You find the most interesting places to go birding. I like the way you weave your history stories into the adventure. The cemetery is most intriguing.

Of the birds you listed, I think the WEWA is the only one that doe not make it as far north as my area of SE Vt - I love the little guy, alto when I lived in PA I always mis-IDed at the beginning of the season as a CHSP until they finally arrived and I heard the first one singing. Nice photo - they stay high and are tough to find in the foliage.

Chris-They do get up in the trees but come down to lower levels too.-I saw some skulking in the mountain laurel.

Very nice list of various species for the weekend, Larry. It looks as though the warblers are in their prime in your area. It's nice to be able to see so many of them in one trip.

I've seen a few Worm-eating Warblers, and I've heard a few, but I'm STILL unable to really hear the difference between their trill and the Chippies' trill unless they're both trilling at once! It frustrates me.

what an interesting walk that was! Good list of birds!

dzugman-Sounds like the "trill" is gone.I think it's easier to consider where the trill is coming from.-If you are in an area where you are in the woods near rock leges and hillside then the trill coming from that area has a better chance of being a WEW. Usually chippies are easier to find too.

Larry, I am here in CT in this deluge birdwatching also. I saw a WEW out at Lake Hayward yesterday, my first for the state. I love this little bird. I first saw it about a month ago in WV and I loved it right off. I don't know why, but it appealed to me more than the flashy cereulean. I think I love the vigor with which it sings. I'm doing as much bird watching as I can while here, but I'm off to NY tomorrow and Maine later on next week!

Kathiebirds-Lake Hayward is where I came out last month when I once again got sort of lost leaving Devil's Hopyard.-That place is like the Bermuda Triangle-I lose all sense of direction when I'm driving around that area.-I like the WEW better than the Cerulean too because I can actually get photos of WEW where I'm lucky if I even get a good look at a Cerulean.-Hope you enjoy your trip.

I think there is a site or blog that is devoted to old cemeteries in southern New England and New York.
If I stumble across it again, I will pass it on to you.
That area was probably farm land at one time, and there most likely homes nearby.
It is sort of like when you think you are out in a remote area, and you come across a bunch of stone walls.

Mathew Housekeeper-Okay-thanks-that would be a good bit of information to have.