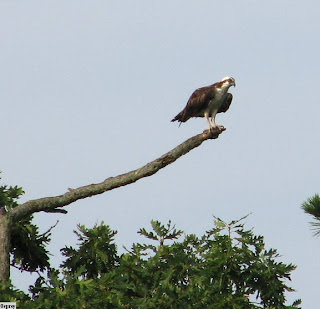 When I'm indecisive about what type of birding to do, I often refer back to a link on the COA website titled "A Connecticut Birding Year", written by David Provencher back in 2000. After reading Part 3, which includes the summer months, I decided that I would do a good portion of my birding along the shoreline for the next month or so.

On Saturday, I visited a place called Chaffinch Park that I had found on the Connecticut Coastal Access Guide website. Two things caught my attention about this park. One was that it was listed as a place that was good for birdwatching and the other was that there was no entrance fee. I spent only a short time there because there weren't as many shorebirds as I had hoped. I did see an Osprey nest with 4 Osprey in it. I filmed a video but didn't include it here because it was of poor quality. There were a lot of robins and other birds feasting on berries in several of the fruit trees located in the park. 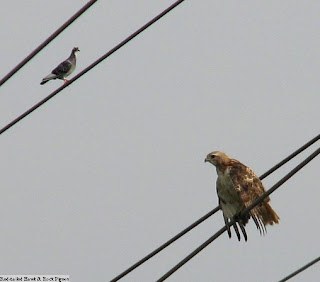 Somewhere along my travels in the town of Guilford, I noticed a large bird perched on a power line with its wings spread out like a cormorant or vulture. When I stopped to take a closer look I identified it as a Red-tailed Hawk. I'm guessing this is a younger bird. I've noticed that some of the younger red-tails seem to settle themselves in unusual places. I've seen them sitting on the ground at beach parking lots or perched on places that don't solidly support them like the tops of cedar trees. This one seems to be trying to figure out the logistics of how to turn that Rock Dove into a meal. 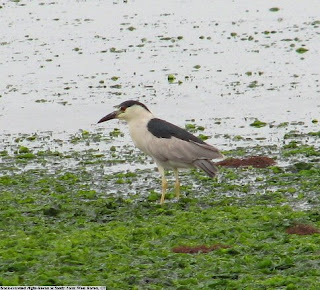 When I first started birding a few years ago, I came across what turned out to be a Black-crowned Night-Heron perched in a tree. It was near the Connecticut River, not much more than 100 yards from my house. I had no idea what it was so I started sketching a picture that included any noticeable field marks. Then I noticed it a reddish eye and some sort of plume feathers on the back of its head. Was it some rare bird that had accidentally flown in from a tropical location? I started checking through my field guide. Ah-ha! Black-crowned Night-heron. An interesting bird to find so close to home even though it wasn't the rare bird I hoped it would be. Sandy Point is a good place to find these birds. I have been there three times and seen them during each visit. 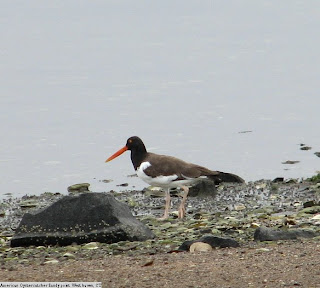 Many years ago in a small village near the ocean there lived an obnoxious species of birds, which were referred to by the villagers as mottlebirds. The mottlebirds were a large bird with brown bodies and dark heads . They were often seen walking about the town green putting on displays. They would spread their wings and then slowly turn in circles while holding their bills in an upward direction. This type of displaying seemed to give them an air of conceit. The merchants in the village did not like them because they were constantly stealing food from their carts. The mottlebirds were also known for harassing other birds and animals that came within their range.
-
During one particular winter, a snowman had been built on the town green. This did not seem to sit well with the mottlebirds who were constantly pecking and squawking at it. People joked that the snowman, with his brightly colored orange carrot nose, did not live up to their standards. The mottlebirds, with their perfectly shaped shiny bills, seemed to be fixated on that carrot nose! They kept up this harassment every day from dawn till dusk.
-
One morning it was noticed that the snowman had been moved from one end of the green to the other; and the very next morning the snowman was seen on the other side of the road near the hardware store! Residents joked that the snowman couldn't take any more abuse, but assumed that children had moved it during the night as a prank. Each time the snowman moved, the unrelenting mottlebirds followed him. The snowman's final day of existence ended when he reached the shoreline and was overcome by an exceptionally high tide. All that was left of him was the carrot nose that had washed up on the beach. It was promptly eaten by the greedy mottlebirds.
-
Later that summer, when the eggs of the mottlebirds began to hatch, an odd thing happened. Instead of shiny little beaks, the baby birds were born with gigantic orange bills. The babies were ostracized by their parents and chased away from the village. The young birds eventually settled along the shoreline. They soon discovered that their giant orange bills came in handy for opening oysters and other bivalves. This new generation of birds were a modest species and had none of the mean traits that their parents possessed. They were named oystercatchers and till this day they are still with us. The original mottlebirds disappeared from the village and were never seen again.
click to play
The main attraction for me at Sandy Point were the Black-crowned Night-Herons and American Oystercatchers seen in this video. I noticed a Peregrine Falcon resting on a distant sandbar. It sat there for over an hour with something next to it, which may have been prey it had captured. There were very few terns as it had been explained to me that their nests had previously been wiped out by stormy water conditions. I did see one piping Plover and 2 dowitchers as well. It was reported that a Whimbrel had been spotted in the area too, but I didn't get a chance to see it before I had to leave.
Posted by Larry at 7:59:00 AM

Oh ..like that story! nice...so thats how the Oyster catchers got that big orange bill! :)
Great video..How cool to see all three birds in one shot!
Looks like shorebirding is starting to get better!

Hi Larry. Thanks for sharing the story of the mottlebirds.

Larry, love the story of the mottlebirds, thanks for sharing it. I love those Oystercatchers with their orange bill.

Dawn-I am looking forward to seeing a greater variety of shorebirds soon.

Early Birder-What makes you think it was a story.

Cindy-It sure makes it easier to identify them.

Haha! I liked that little carrot-nosed mottlebird story! :-) I have yet to see an Oystercatcher...lovely photo of one.

Larry, that's an interesting legend. I wonder if modern taxonomists take it into account when investigating the evolutionary relationships amongst the shorebirds.
Thanks for sharing.

Jochen-If they were aware of this legend I'm sure they would take it into account but since the legend just started we have to wait until it becomes more well known.

Larry, if there is anything I can do to spread the word amongst the scientific community, just let me know!

Send them a carrot in a plain brown package with a link to this post printed on it.

Sounds good but if I send them a carrot grown in Germany won't it mess up their DNA analysis?

Larry.
I saw today that you joined Nature Blog Network! Awesome! But where is your NBN logo so u can track your stats?

Jochen-yes-that's true unless you can soak it in a jar of Atlantic ocean water for 24-48 hours.

Dawn-I didn't realize that the stat thing was part of it.I set up a stat thing once called statcounter but removed it.-I don't want a stat tracker because I don't want to become obsessed with trying to increase my numbers. That would mean spending a lot more time on the blog and computer.

Yeah..I know what u mean about the stat thing.,,well just a thought to get more people to your blog.
Not that u dont already have a great following.

I like the story. This is the time to look for migrating shore birds around here. The Great Egrets are arriving and we had several Black-crowned Night Herons in our downtown park. I would like to do birding along the ocean.

Ruth-I'll trade you a few shorebirds for some of those Boreal Species you get up that way.

Very interesting legend, Larry. That was neat to see the BCN heron walking around the marshy area with the oystercathchers. Hopefully, you are out (or were out) today looking for more birds, especially shorebirds. And I hope the weather has improved. It seems like your part of the world has managed to get quite a bit of rain this year.

Mary C.-I had planned to look for shorebirds in the farm fields today but the access road was flooded.