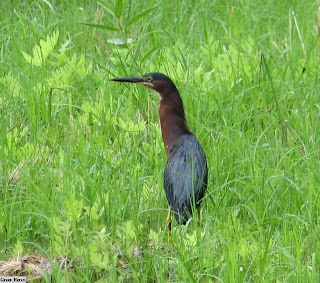 I did some birding along the Connecticut River in Portland this morning. The water level was very high. I saw a young Bald Eagle stretching its wings while sitting on the end of Gildersleeve Island. I counted 7 Indigo Buntings during my short walk. There were also numerous Northern Flickers, 2 Belted Kingfishers, a Solitary Sandpiper, and a Rose-breasted Grosbeak along with an assortment of other familiar birds. I didn't stay long because they were setting up for a truck pulling event at the fairgrounds.

If you are heading north on 17a, there is a short dirt drive-thru past the fairgrounds on the left. From this location you have a good view of a flooded field at the outer edge of Wangunk Meadows. There were 2 Green Herons along with a Great Blue Heron there this morning. 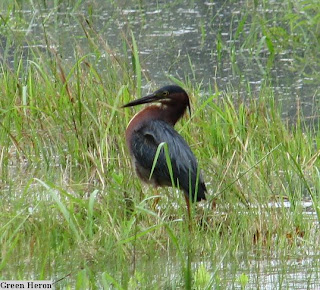 One of the interesting things about herons is that their appearance changes a lot depending on their posture. Note the change in appearance of the same bird in photo 1 and photo 2.

click to play
I had just finished taking this video of the heron when I heard a loud splashing sound coming from my left. I saw what appeared to be a coyote crossing the field.
click to play
I quickly hit the record button again and watched as the coyote came splashing across the field less than 40 feet away from me. Talk about being at the right place at the right time! I have seen coyotes in the area on occasion but never in such dramatic fashion! Note: (The squeaky sound in the middle of the video is the camera rubbing against the camera case. I was using it to steady the camera. )
Posted by Larry at 1:08:00 PM

cool video. When they appear in my sister's yard they are usually followed by Crows ouver head making a racket. Nice pictures of the herons. I've noticed that as well that the heron appears as different birds according to their postures.

Larry, what a sight! How fortunate you were to be there. This is what makes birding so much fun. I love these unexpected surprises.

Cindy-I noticed that the herons moved in a hurry when they saw the coyote coming through and you could hear a change in the background noises.

Chris-Thanks-I know how you dislike the word cool-but I'll take it.

Kathiebirds-I agree-unexpected surprises are what turns an ordinary outing into a special one.

Excellent video! How exciting! Here I am reading blogs..LOL..in between shopping with family and dinner..
For me it is like reading a chapter in a good book..I always love it and its better because I know the people who are writing!
Great photos of the Green Heron..one of my fav birds!

Wow!! Very cool...were you a little nervous too seeing a coyote running at full trot? Loved the Green Heron footage as well.

dawn-I can see how knowing the peopl who are writing would make it more interesting for you.

Kelly-No-but if I were walking in a field at dusk and saw a pack of them running toward my direction I would be nervous.

Neat Larry! I love seeing the Green Heron as I've never seen one, and those are great shots. :c)

That is amazing.
Great footage.

Super cool video! Cute Hubby and I heard a pack of coyotes last weekend while hiking... so cool!

Warren & Lisa-They are something to listen to.I think I've heard them howling at the same time dogs in the local pound are howling.I wonder if they communicate with each other in some way.

Larry, This reminds me of Mutual of Omaha's Wild Kingdom. You are the new Marlin Perkins. That's great!

Geez Louise! That is a terrific video! So glad you got it. I'm really amazed.

Patrice- As long as I don't have to play Jim Fowler's role. He would have thrown a net on the coyote and tackled it.

That coyote is great! Makes a hell of a noise though, not subtle at all! Cool video :)

We have a lot of coyotes around here, but I seldom see them. Great video capture.

Very cool! Kudos on taking advantage of a great opportunity & for sharing it, as well!

oh lovely videos! Herons are such shapechanging birds, I agree. i love the unexpected moments on birdwatching walks, and the chances for longer observations...

crafty-Unexpected moments are the best.I wish there were more of them.

Great video Larry! That coyote acted like something was chasing it.

Hi Larry,
I enjoyed the videos. Green Heron looks good. Seeing that Cayote in that fashion is pure, luck I guess.
Have a great weekend!

Very good Heron pics and a great video of the coyote. Helen