One Coyote And A Lot Of Snow 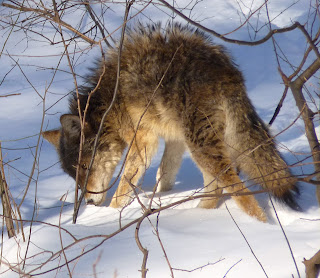 I saw this Eastern Coyote in Portland on Saturday. I know that some people consider coyotes to be a nuisance but I am fascinated whenever I see them. This coyote was smaller than others I have seen in the area so I am wondering if it might be a female since they are usually the smaller of the two.

The coyote's mating season is during mid winter and the pairs stay together for life although their lifespan is only about 4 years in the wild. This coyote was sniffing the ground and at one point seemed to detect something beneath the snow. It cocked it's head as though it heard something and then pounced on the snow but came up empty. You can see it's yellowish eyes and black-tipped tail. There has been research showing that Eastern Coyotes have some wolf DNA in them which explains why they are larger and more variable in color than their western counterparts. 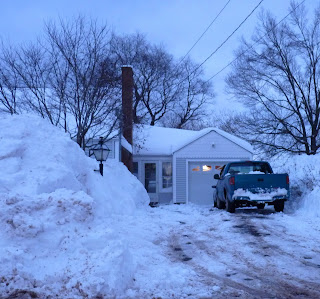 As you can see from the photo of my driveway, Big January has become Big Mess. Enough with the snow already!

Larry- it looks like your house is almost burried in the snow! I sure hope you get a break in the winter stormy weather. Do you have a snowblower, or did you have to shovel all that?

The neighbors up north at Hasty hate coyotes. I don't understand it.

Lynne-I've alway used a shovel but the idea of a snowblower crossed my mind for the first time this year.Thankfully, I do have some helpers in the household. I think having wild animals like coyotes livng in the area is cool.

Gosh that's a lot of snow!

I've never seen a coyote; hope to one day, tho.

I love the video! The thrill of the wild ... We have a pack of Coyotes living close by but only occasionally hear their eery howling at night. I haven't actually seen one for several years. Looks like you are buried in snow to the roof. But look at the positive side: the snow will keep you warm, protect you from the wind (it's what the snowbuntings do)

great photo of the coyote, they are great creatures, i agree. I am also sick of the snow, ugh

What a fantastic photograph. Really wonderful. I must admit that I am a bit creeped out by them because we lost two cats to them years ago. Needless to say, our cats live only indoors now. It is an eerie sound in the middle of the night. They often travel our land.
Your house looks oh, so cozy amidst all the snow. We have a lot too. I love snow. :<)

Laura-At least I don't have worry about cutting the grass or trimming the hedges. I'm sure you'll see a coyote eventually-lots of them around these days.

Hilke-I don't mind the snow once I get it off my roof and shovel a path around the house.

Dan-thanks-you live in CT too so I know you've got to tired of the snow.

Nan-thanks-Sorry about the cats-We keep ours indoors now too.Good year for you if you like snow.

You sure have us beat for snow. That is a great picture of the coyote...superb lighting. We have lots of them around here.

Ruth-We may have you beat but it doesn't feel like we've won anything.There has been a problem with roofs and buildings collapsing the last couple of days due to the weight of the snow.Do you have wolves in your area as well?

Its Time to Live said...

Nice image of the coyote. We have snow but nothing compared to you. It is -3 and 40 mph wind as I type here.

Larry - sorry we haven't stopped by in a while. This is a really cool pic. They say we have coyotes down our way here in Maryland, and I think we've heard them calling occasionally, but have never seen one. (We did hear a pack calling once in a thunderstorm while camping in the Appalachians once, but that's another story...)

Hope the winter storms haven't hit you TOO hard

It's time to live-this is not a normal winter for around here.I think it must have been a record Jnuary for snow. -3 and 40 mph wind! Bitterly cold and windy is not a combination I care for much.

Warren and Lisa-Not to worry-if I had to apologize for not keeping up with reading blogs then I would spend all my time apologizing.Appalachians,coyotes,and thunderstorms-must have been some night!

Wow!!! And I thought I had snow here in Toledo. Wowzers!!

That picture of the coyote elicits that awwww poor little thing mother-hen response. Only a 4 year life expectancy :0(

It's becoming a problem for me.
Bitter, snowy weather. Feral cats. I'm feeding the danged things.

I'll be glad for spring.

To borrow from the old Johnny Paycheck song: Take This Snow and Shovel It! Great job with the coyote photo Larry.

Ugh...I sympathize on all that snow! Reminds me of the lake effect storms I've experienced in the past.
Cool on the coyote! Like you, I think they're pretty cool. :)

Coyotes are definitely under-rated in our opinion too....kind-of like raccoons and possums...it's easy to take them for granted, but boy are they ever so neat and specialized animals. Glad to have run across your blog and, as wildlife field biologists, looking forward to following - it's right up our alley :)

Cathy-I wonder, do people in Toledo use the expression holy Toledo? It's hard not to sympathize with animals that have to rough it out in the elements.

Steadyjohn-Thanks John-I'm sure old Johnny would have a few such words for this weather.

Ben and Carrie-Being a biolgist sounds like an interesting field to be in. I'll be following your blog as well-

Hope you are surviving all the snow. Chicago got slammed pretty hard, too. We have a "warm up" spell right now, which I hope is true for you as well.

By the way, I'm so glad you have such a non-aggresive view of coyotes. They, too, have their place in nature.