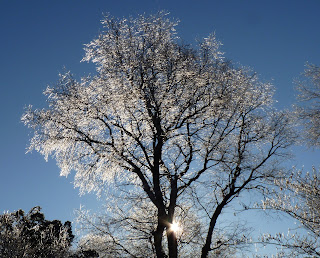 I'm still catching my breath from the winter we've had so far. We had 59.8"of snow in January which is a new record for Connecticut. After all the snow, we also had a bit of an ice storm. Ice-coated trees are a pretty sight in the winter but the additional weight of the ice also contributed to hundreds of roof collapses around the state. Fortunately, there hasn't been any serious injuries from these collapses. 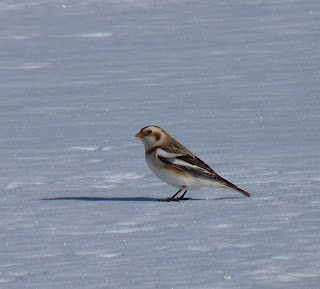 Here is a photo of a Snow Bunting. I think they really stand out nicely against a snowy background. The weather conditions did slow my search for birds in January. I ended up seeing 82 species which is about 20 less than what I saw in the two previous years. Most of my birding was done by car along with a few visits to shoreline locations. There was too much snow inland. Here is my list for January 2011 in order that the species were seen: 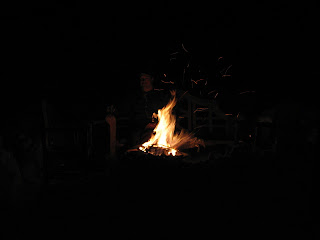 I made sure that I shoveled a path through my back yard to where the fire bowl is. A little bit of music along with a campfire was a nice way to finish a long day of shoveling. Now I'm looking forward to see what February brings us.
Posted by Larry at 5:22:00 PM

Wow fantastic bird list you got in January. When I think Iðve only seen 23 species so far!!! The snow bunting picture is awesome!

You have a great list regardless of the total. The weather has been harsh for humans but it must be so much worse for wildlife. Thankfully we have had no ice storms, but your tree is beautiful. And the Snow Bunting picture is perfect!

Chris-I was surprised the first time I realized you can see over 100 species in Connecticut with some effort.-Thanks on the bunting photo comment-Glad you liked it.

Ruth-Very true-when you look at it that way-I probably have no real reason to complain.-I do love the way that icy trees reflect the sun in the winter.

Larry, that is quite a list and several of those species would be lifers for me! I want to see a purple sandpiper and a ruddy turnstone! I tried to find a great cormorant up here but never succeeded. Congratulations on a Great List in spite of the snow! Now, I am ready for a warm fire!

Kathiebrds-Thanks-the good thing is I got out and saw some nice birds before all that snow hit.Your odds for seeing a Ruddy Turnstone or Purple Sandpiper at Meig's point in Hammonnasett are pretty good this time of the year if you happen to be visiting Connecticut. A fire is very comforting during the winter.

It been a tough winter here on the tundra as well. We gave up and headed off for a birding outing in Florida. :)

Great list of Birdies for a cold winter month. If I was there I would be hibernating. Burrrr

I reckon you did exceptionally well considering all that snow.

Larry, I envy you your list! It pales against mine for the 2011. Nice photo of the snow bunting!

Love your snow bunting picture! Hope this storm was the last of your winter...

Nice pic on that Snow Bunting!
I've never seen one before. I love your blog and I'll come back again.
I'm in the South with better weather and you've seen more species than I have in January...and I've been birding!
I'm impressed.