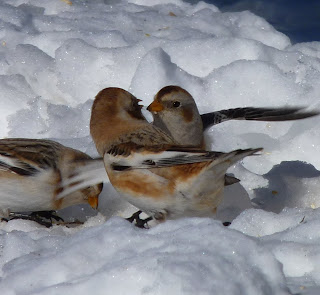 It has been a rough start to winter this year in Connecticut. Snowfall amounts exceeded two feet during a recent snowstorm and yesterday's icy conditions left thousands without power (mine went out while working on this post). One of the bright spots during this tough stretch of winter has been the arrival of large flocks of Snow Buntings, welcome visitors from the arctic region. 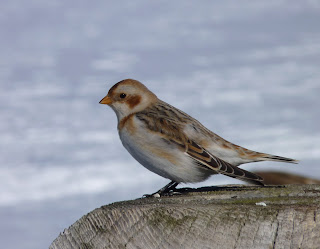 I took these photos of Snow Buntings at Hammonasset on Martin Luther King Day. I sat in my truck mesmerized as large flocks of Snow Bunting repeatedly took flight before settling down to start feeding again. It makes sense to me that some people refer to these birds as snowflakes, because when look like large snowflakes drifting in the wind when they are flying. 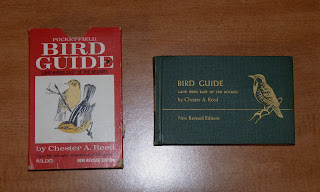 I was given a copy of this 1951 printing of a Chester A. Reed field guide some time back. The cardboard protector on the left shows that it retailed for $3.95 at the time. Here's some of what Chester A. Reed had to say about the Snow Bunting:
-
"When winter storms sweep across the land these birds blow in like true snowflakes and settle down on wind-blown hillsides and benchlands to fed upon the weed stalks that rise above the snow. They are usually found in large flocks which start up from the ground, as one bird, at the slightest noise."
-
This old field guide can't compete with today's field guides in terms of accuracy and usefulness in identifying birds but I like the descriptions.
-
Here is a quote from one of Theodore Roosevelt's books about Snow Buntings:
-
"One bleak March day,...a flock of snow-buntings came...Every few moments one of them would mount into the air, hovering about with quivering wings and warbling a loud, merry song with some very sweet notes. They were a most welcome little group of guests, and we were sorry when, after loitering around a day or two, they disappeared toward their breeding haunts."
-
Snow Buntings were also mentioned on pages 18 and 61 in this Inuit Mythology book by Evelyn Wolfson . 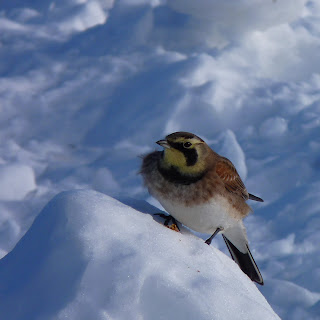 There were also plenty of Horned Lark around. As I was scanning through one large flock of Horned lark, I was able to find a Lapland Longspur, # 74 on my January list. 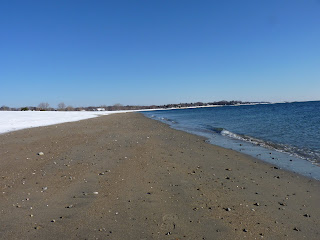 I spent some time at Sherwood Island Park in Westport where Common Redpolls had recently been reported. During my visit I saw pretty much what you see in this picture. 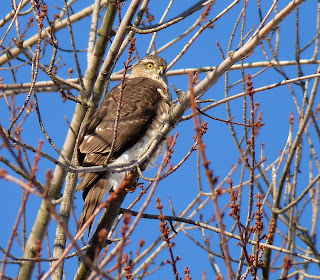 As I was driving along the streets of Stratford, I spotted a Sharp-shinned Hawk, or maybe it spotted me. 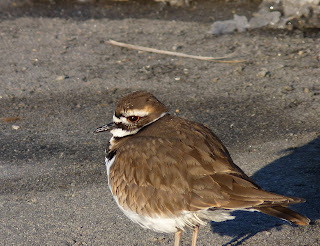 There was also this one Killdeer, all by its lonesome. I talked to it for a while before moving on. 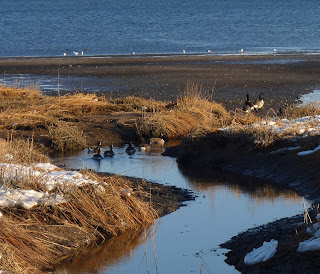 New Haven's Long Wharf was my last stop of the day on Sunday. I added Ruddy Duck, both scaup, and Gadwall. Most of those birds were located near docks along the shore. Just to the right of this photo there is a nature trail where I found a Greater Yellowlegs which flew off while repeating a 3-note flight call. This made it easier to distinguish for a Lesser Yellowlegs which usually makes a 1-2 night flight call.
click to play: Common Mergansers being harassed by gull
I've continued to plug along with my January despite the weather. My total number of species seen in January is 75 .
Posted by Larry at 2:41:00 PM

I love Snow Bunings. Earlier this winter Art and I pulled to the side of the road to watch some in the distance. The whole flock flew up and swirled around the truck. Itvwas like sitting in a snow globe!

It made me smile to think of you talking to a lonesome bird on the shore. You're a good guy.

Cool Larry. Snow buntings are also around Reykjavík during the winter but not during the summer. They then go inland! It is rather cool to see them in winter and they enlighten the bad season very well!

Beautiful images, Larry, especially in the large format! I am still looking for Snow Buntings. They have been reported but have moved on whenever I showed up ;-(

Lynne-The Killdeer didn't seem to mind me talking to it-it stayed close by.

Chris-Hopefully they don't get any volcanoe soot on them or that would ruin the whole effect-(just kidding of course).

Hilke-thanks-it's so nice when birds will cooperate with the camera-If you ever end up in Connecticut during the winter, make a visit to Hammonasset. Your odds woould be pretty good of finding some.

Great post Larry! Your Snow Bunting photos are among the best I have seen. You must have had a lot of patience to get those shots.

Great series on winter birds. I love to see Snow Buntings, especially the white flash of them as a flock flies.

I'd love to see snow buntings, they come to the UK too, lovely birds

Ruth-Thanks-It didn't take patience in this case because I was enjoying watching the buntings while waiting.

Harold-It is interesting to watch the flock move all in white..

Snow Buntings ... delightful little birds and fun to watch as they feed. I quite often talk to the birds in the frame in the hope they will offer a good pose ... Is that sad? Excellent post Larry.

Larry, you are far ahead of me. I am currently stuck at 49! I have yet to see a snow bunting anywhere around here, and like you, the snow has kept me grounded and homebound. I hope to go back to a new beach a friend took me to on MLK day earlier this week where I saw a rough-legged hawk!

Early Birder-Birds seem to be bothered by motion or visual things but seem more curious than scared when I talk to them.

kathie-Getting to different types of areas near the shore is key-open water at rivers, marshes, and coastline is where we get the majority of species in the winter.The good thing is that it's a good way to learn new spots in your new area.-Rough-legged Hawk-great bird to see!none of those on my list this year.

I absolutely love those quotes Larry. A nice addition. In spite of several backroad trips, I yet to see any "snowbirds". Hard to figure considering all the nasty weather we've been having....

Howdee Larry,
Great quotes..I love the descriptions too!
Some real great birdies in your frozen cold whiteness up there.
You birders up there are all so brave to go out in to the freezing temps and slippery slopes.

Hope to see you when it all thaws.

The buntings are understated, but still beautiful. I saw my first lesser scaups and redheads yesterday, which was cool.