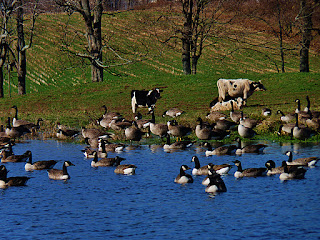 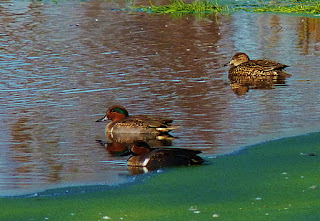 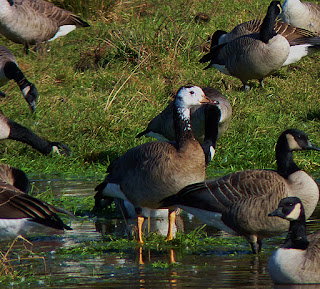 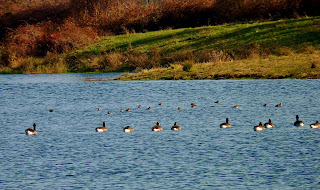 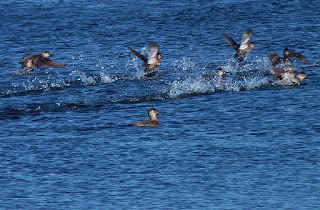 A closer look revealed that they were Ruddy Ducks. I have found Ruddy Ducks at this pond in past years. I 'm guessing that the depth of the water, type of vegetation, and geographic location are some of the reasons why they return here but I'm curious why they ignore other ponds in the area that appear to be almost identical to this one. They must have their reasons because I counted 26 of them and 26 Ruddy Ducks can't be wrong!
The Ruddy Duck is a small diving duck that rarely walks on land. It is very difficult for them to walk because their feet are set so far back on their body. I like they look swimming around with their tails perked up in the air. They were an introduced species over in Europe and are considered to be a problem in some areas over there.
Below are some links to information I found on the web about Ruddy Ducks. Much of the information is the same but each one offers something slightly different.
Migration of The Ruddy Duck by Nancy-Hayden on eHow
Ruddy Duck from Ducks Unlimited
Ruddy Duck from Carnisius Ambassadors for Conservation
Ruddy Ducks from Ohio.gov
and there is fantastic photo of a Ruddy Duck on this recent post from Birding is Fun
Posted by Larry at 12:42:00 PM

That looks like a leucistic goose to me. We have a few of them locally. I have seen the winter diving ducks from a distance around here but should take a closer look.

the goose is strange, but i am not that good a "birder" to know. The truth of the stuff that grows in the pond is something i know and very correct - must be yummy to them

Ruth-I'll have to look that up thanks-I don't like lugging around a scope but it comes in handy for those distant ducks.

Whitemist-Neither am I. I've seen that stuff before-good to know the ducks lie it.

Love that photo with the Canada Geese in the foreground and the cows in the background. So tranquil! The odd goose may be a hybrid of Greylag Goose which has yellow legs, and perhaps Snow Goose or domestic goose or maybe, as Ruth said, a leucistic goose.

Hilke-Thanks-I like thought having the cows in the background did make for an interesting scene. The mix with the Greylag seems like a good possibility.

An interesting post, Larry. that unusual goose is something else and you have me intrigued! I have not seen one green-winged teal yet this season! I guess i will have to go "hunting" for some!