5 Reasons I Was 2 Birds Short Of My Goal 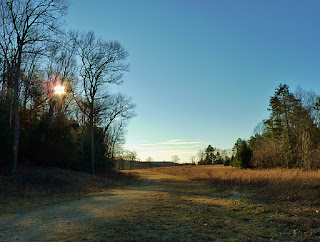 I spent the last Sunday in January at Machimoodus Park in East Haddam. I hoped to add a few new birds to my list but the only new species I found was a Common Raven. It was being chased around by a handful of American Crows. 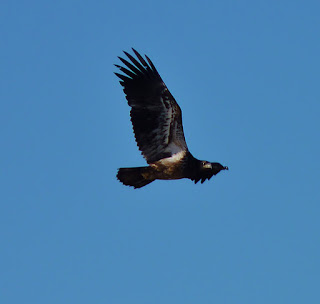 It was a pleasant winter morning with plenty of sunshine. There was a slight breeze which the Bald eagles soon took advantage of. I saw two young eagles and two adults. They were playing a few aerial games with each other which was interesting to watch.
Later that morning I  took a ride to Lebanon to look for a Harris Sparrow which had been reported several times over the past couple of weeks ( thanks to Annie & Mike Perko for finding it). I met two other birders at the sight where it had been reported most recently. We waited patiently as we watched White-throated, Song, and American Tree Sparrows ground feeding under a bush. After about 20 minutes the Harris Sparrow showed up. That turned out to be the last new species I added to my January list. I kept looking for species that I thought would be relatively easy to find like Brown-headed Cowbird, Yellow-bellied Sapsucker, and Brown Creeper but it just wasn't to be.
My personal goal for this year was to try to find 90 species in January and to use less gasoline than I had in previous years. I knew that I had missed the mark but didn't realize how close I came until I did the final tally. My final species count for the month was 88, just 2 short! The whole big January thing is only a game for me but missing it by just 2 does bother me just a little bit. That should give me added motivation for next year.
5 Reasons I Missed My Mark In Big January:
Oh well, there's always next year!

I always envy your totals even if you don't reach your goal. I was aiming for 100 in 2 countries and knew I could easily hit that target with a trip to Algonquin Park the last weekend of January. My reason for not getting the goal- A three day ice/snow storm that kept us near home.

Still 80 plus is a lot. At least by my southern Minn standards. I counted 34 on one day though. We were participating in the National Eagle Centers Golden Eagle survey. I got skunked that day but 140 observers counted Goldens. I did come up with a "lifer" though. A Long Eared Owl. :)

Larry, don't you wish you could combine last year's list with this year's list! I could not find a turkey vulture in MA for anything and I did not find a brown creeper either. Still, you did a great job! You are the winner for finding the most species in your own state. I ended up with 66 species for MA and 68 overall with the the turkey vultures seen in CT and the Northern Hawk Owl seen in Maine. I have yet to find that Harris Sparrow however. Maybe later on this week I will when I am back at my mother's again.

Congratulations on your Big January!

A shame you just missed your target but eighty eight sounds like an excellent total to me! I think I would struggle to get anywhere near that many any month.

Ruth-It must have been fun to expand your species total this year getting into those higher numbers.Weather is usually a factor when your doing the big January.

troutbirder-ongratulations on the Long Eared Owl! I saw a phantom owl that turned out to be a distant branch that looked like an owl.I don't like it when that happens.

Kathiebirds-Thanks-We did have to wait around for that Harris Sparrow but with people throwing seed on the ground you know where to look.

Shysongbird-Maybe next year you can give it a try and see how far you get. It's a great way to motivate yourself to get out and see more brds than usual.

I just read the results for the Big January in Connecticut. One participant(Tina Green)saw 156 species in Janaury!

You know, it's funny: I really enjoy talking to other birders just to get different points of view, different info on other birds or birding spots, etc., but sometimes you can get so wrapped up (or they wrap themselves around you, conversationally!) that you get stuck. And always in the back of MY mind, anyway, is "great talking to you, but I gotta GO!"

And 80+ is a lot of species. Maybe try for a big March? I should do something like that, repeatedly, or I'll never get to 400 lifers.