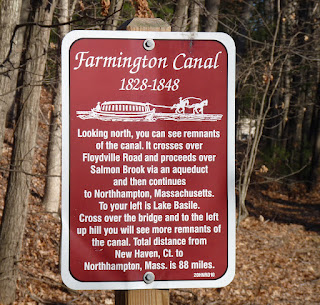 I took a ride up to Simsbury to check out the Farmington Canal Trail over the weekend. The original canal was constructed between 1825 and 1835 to help facilitate trade. In 1847 the canal was converted to a railroad line that was still active until the 1980's. These days, it is used as a trail for pedestrians and non-motorized vehicles. It covers a total distance of 88 miles from New Haven to Massachusetts. Over half of the trail is now paved.
This trail is also part of a larger project called the East Coast Greenway with plans of building a non-motorized trail from  Florida to Canada. 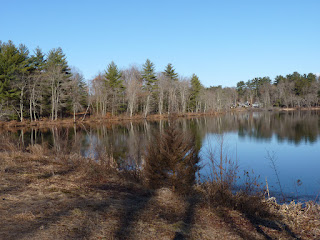 I parked my truck in a lot on route 10 in Simsbury where there was direct access to the trail. The trail started out behind restaurants and businesses but it wasn't long before I was treated to some natural scenery. This little pond is called Lake Basile. 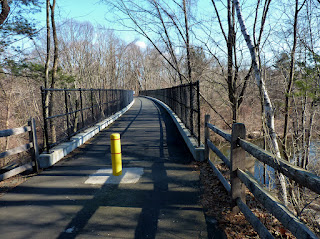 I couldn't believe how nice and flat this paved trail was.  I wanted to stop to look for birds but my bike wouldn't let me. I was barely pedaling but the bike seemed to keep going and going! 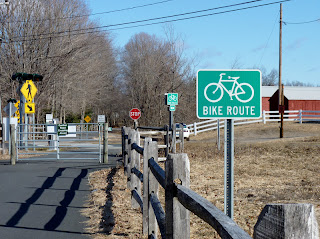 I've noticed that there are more bicycles on the roads these days than ever before. The law states that bikes have the same right of way as motor vehicles on most of the roads in Connecticut. Many serious bicyclists are using these laws to their advantage by what they refer to as "taking back the roads". I'm wary of riding my bike on roads that are filled with drivers talking on their cell phones. A trail like the Farmington canal trail eliminates that danger. They even provide marked cross ways where the rail crosses busy roads. 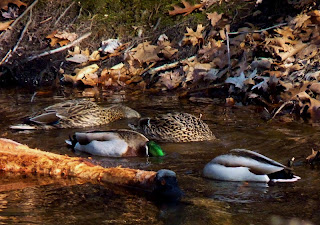 I didn't have much success taking pictures of birds. Even the Mallards "ducked" away from the camera when I tried to take their photo. 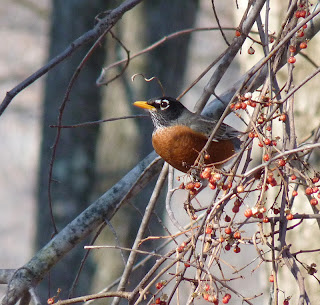 There were American Robins by the dozen quietly chattering to each other as they ate berries and picked through the leaves on the ground. 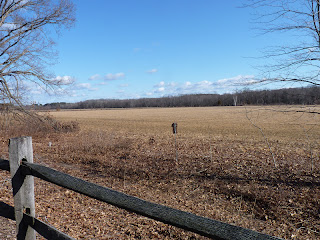 I passed by some scenic fields on my way to Massachusetts. There were Red-tailed Hawks and plenty of bluebirds in the area. 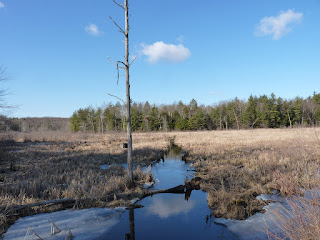 For the most part I would say that I encountered bird species I would expect to find during the winter. I had a nice look at some Pileated Woodpeckers and saw a Raven preparing that appeared to be scoping out a nest sight up in some ledges. I'm looking forward to coming back here during Spring Migration. 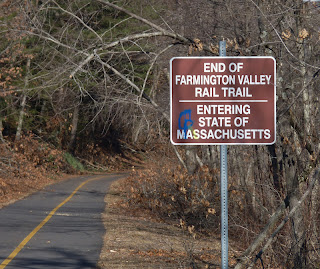 I ended my ride in Southwick Massachusetts near Congamond Lakes.. It only felt like I rode my bike a few miles but according to mapquest my total round trip was about 30 miles. I think I'd better invest in a tire patch kit before going on this trail again. It wouldn't be much fun walking my bike 15 miles back to the truck with a flat tire!
Posted by Larry at 6:19:00 PM

Looks like a great trail, Larry! We have some like this in Maryland but they are always very busy on the weekends with both bikers and pedestrians, making it difficult to navigate sometimes. Are the Connecticut trails very crowded from what you've seen?

Beautiful trail Larry and yes you need to be equipped to go on bike ;-) Nice shot of the american robin..

Sean-I went on the weekend and it wasn't too busy.I got off my bike a couple of times when there was a group of people walking but I also went long distances without seeing anyone. It may be a little busier towards summer. I found the Airline Trail in eastern CT to be busier than this northern portion of the canal trail.

Chris-thanks-you can always count on an American Robin to cooperate.

I found an article that I think will interest you as a birder. Sorry that it has nothing to do with this blog entry. It concerns the link between wolves and songbird populations.

I cannot share the link here in your comments, but if you check out my blog you will see it posted there.

Even though I'm not a birder,I do find your blog fascinating. Thanks for doing it.

Dostoy-Thanks-That is interesting.The wolves are helping bird habitat by keeping Elk populations down.

nice opinion.. thanks for sharing....

Very nice to know this trail exists.. Thanks for posting..& yeah, birding & biking don't quite mix..

Larry, this looks like so much fun! I would love to go for a bike ride but am put off for the reasons you mentioned. I fear getting stuck so far from home with o way to get back! You are such a brave explorer! I did not even know this trail existed!

Cindy-I think the best way is to just stop when you get to a good spot on the trail and work that area for a while before moving on.

Kathiebirds-It does go up to Northhampton MA. There are a lot of different places where you can get on and off the trail so you can just ride for a mile or two if you want. I just found it addictive because it was so easy to ride on these flat paved trails.