Background History Can Add Interest To A Hike 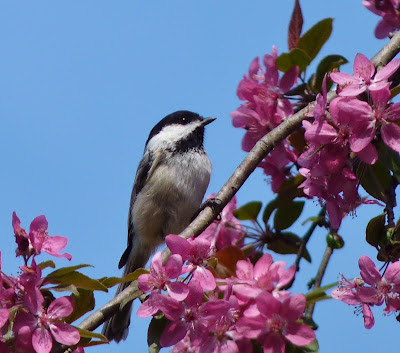 I recently camped out at Macedonia State Park in Kent CT.  Despite the ominous weather forecasts it remained rain-free most of the weekend.

Birds seem to be very interested in the flowers on fruit trees this time of the year. I'm not sure exactly what they are eating. Is it the nectar in the flower, seeds within the flower, or insects? This Chickadee had its face buried in flowers nearly the entire time I was watching it. 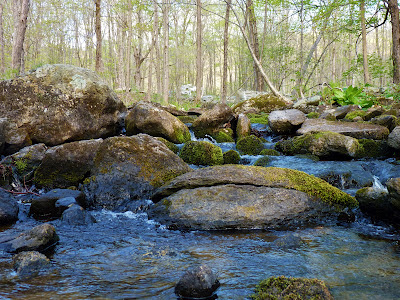 The water in Macedonia Brook was low but that didn't stop the fisherman from enjoying opening day of trout fishing season. Many seemed puzzled by the fact that I was wandering around with binoculars instead of a fishing pole. As I walked along the stream I was reminded of a line from the song Stairway To Heaven: "In a tree by a brook there's a songbird who sings-". Every 50 yards or so there was a Louisiana Waterthrush singing from a tree branch! 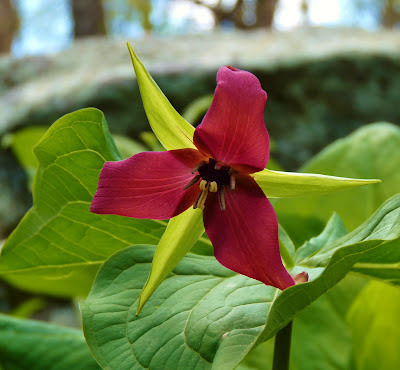 I look forward to finding Purple Trillium in the spring. It's a pretty flowering plant and I appreciate the fact that they're easy to identify. Don't let the pretty flowers fool you though because they smell like rotting meat and are pollinated by flies. 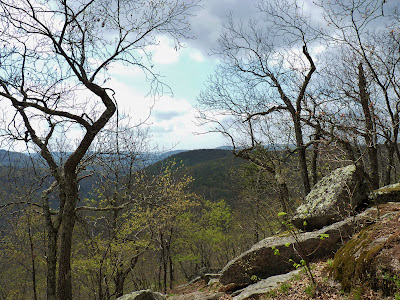 Clouds started to move in later in the day. This is part of a trail that leads to the top of Cobble Mountain.  The sound of Yellow-bellied Sapsuckers could be heard tapping from every direction and Wild Turkeys were gobbling in the valley below. It's a peaceful and scenic area of the state. 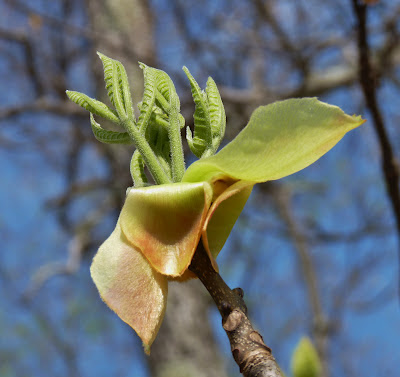 Along the trail I noticed  leaves emerging from this branch. I was impressed by their detail. Do you know what kind of tree it belongs to? 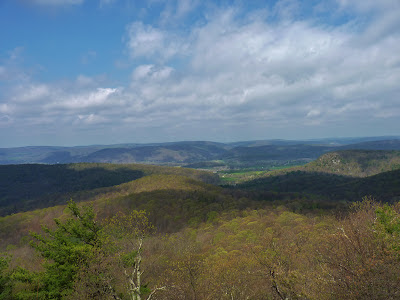 There are certain things that appeal to me during a hike like the sound of birds singing, a cool running stream or the view from the top of a mountain. You can see the Taconics and Catskills from the top of  Cobble Mountain.

Before visiting a park like Macedonia, I like to read a little about its history. I find that having some historical background of the area makes my hike more interesting. In the case of Macedonia, I learned that the Scatacook Tribe once peacefully coexisted with the settlers in the area. It's inspiring to know that I was standing on the very same ridge that the Scatacooks stood on hundreds of years ago. I wonder who will be standing in the same spot 300 years from now? Those are the sort of thoughts that come to mind as I look out in the distance watching hawks and Turkey Vultures pass by.

Lovely post. I enjoyed the combination of the details of your hike and the history of Macedonia. Thanks for sharing! I'm writing on behalf of KEEN Footwear because we want to see everyone outside and active, like you.

We've launched our Recess campaign to motivate people to take a break and get outdoors. I'd love to have your expertise and input for this project. You can add your favorite birding (and hiking!) spots http://recess.keenfootwear.com/birding

Keen Recess Team-Thanks!-checked out your site and submiited a few spots.

Purple Trillium superb.. May check out this park someday..thanks!