Vermont White-crowned Sparrows In The Rain 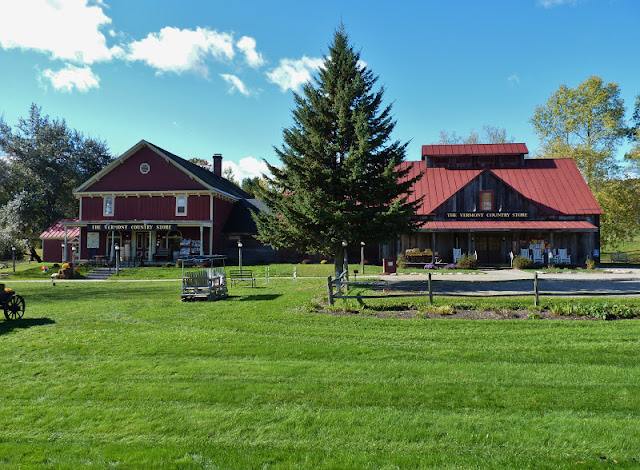 I spent a couple of days camping at Gifford Woods State Park in Killington Vermont. I stopped at the Vermont Country Store on the way up. They offered lots of locally made food samples. They were free but everything tasted so good that I ended up buying some to take with me. 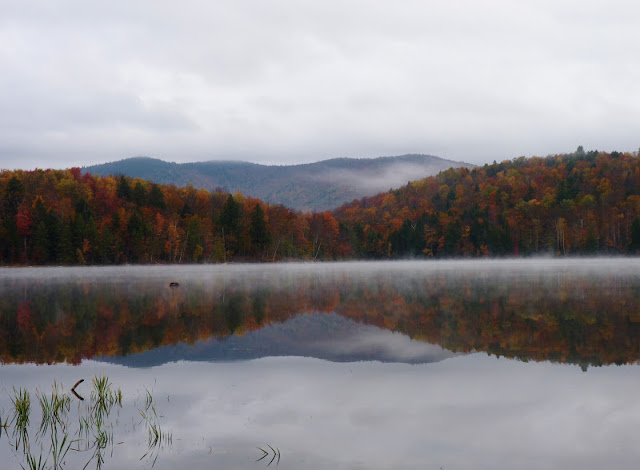 Right across from the campground is Kent Pond. I didn't see many birds when I did an initial survey of the pond. There were Osprey, Common Mergansers, and Mallards on the water and a few Song Sparrows near the shore. I was hoping to see something out of the ordinary because Kent Pond has a reputation of being a good birding spot. 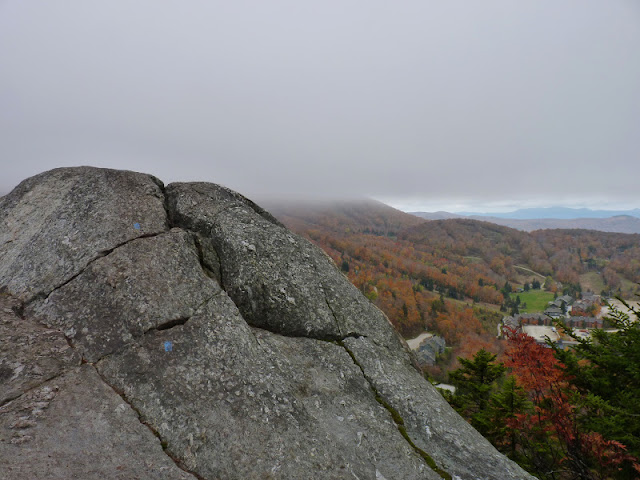 I hiked from the campground to a trail that took me to the top of an overlook. I think it was called Deer Mountain overlook. 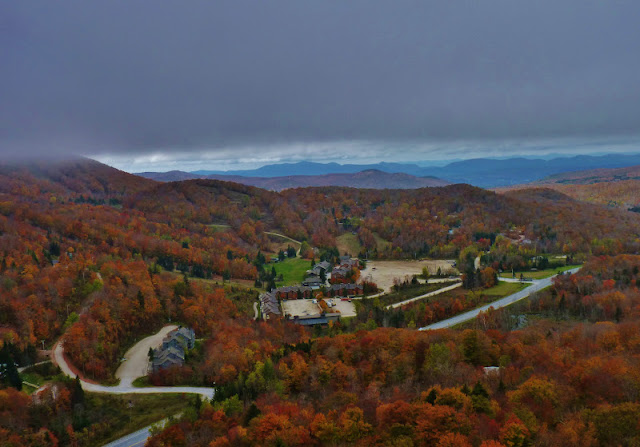 The best way to get a view of Vermon't foliage seems to be when you're driving on long stretches of road. Connecticut has great foliage too but the routes to view them aren't nearly as long.
I passed miles of mountains painted with colorful foliage, lots of antique shops, country stores, and farms along the way. I saw dozens of country inns on my way up. They must hold the record in that category. 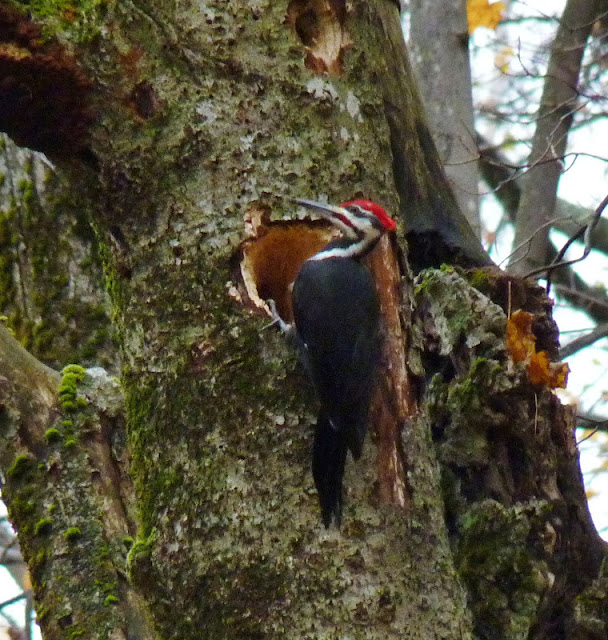 I was disappointed when I heard a forecast of rain for the entire day but it was only a light rain so I decided to hit the trails to look for birds anyway. I finally caught up with the Pileated Woodpecker that had been taunting me with its call. This one looks to be a male with an all red crest and a bit of a red moustache. We're fortunate that these great woodpeckers are doing so well.
Other birds of interest during my walk were large numbers of Golden-crowned Kinglets, a Ruby-crowned Kinglet, Brown Creeper, and a Yellow-bellied Sapsucker. I also found a couple of Ring-necked Ducks and a Common Loon on the pond. 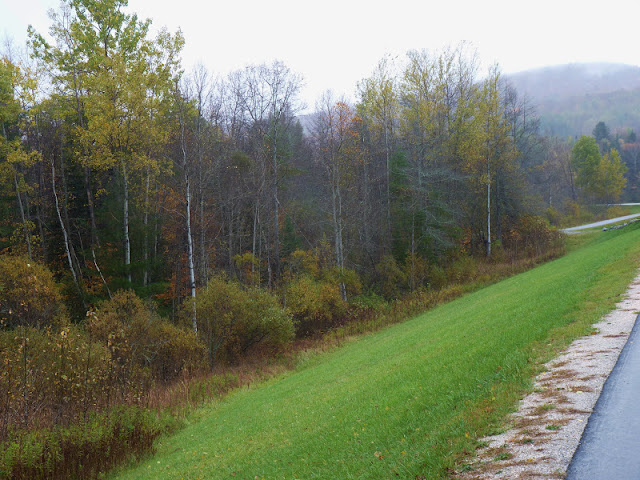 The trail led to a road on the opposite side of Kent Pond. The woods along the edge of this road were loaded with sparrows including White-throated, Juncos, Song, Swamp, White-crowned and I also found 1 Lincoln's Sparrow. 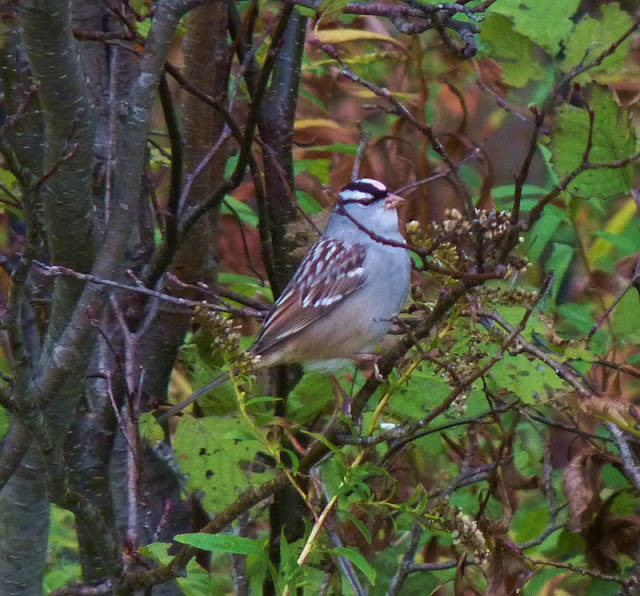 Surprisingly, there were about as many White-crowned Sparrows as there were White-throated Sparrows. I saw as many as 6 at a time. 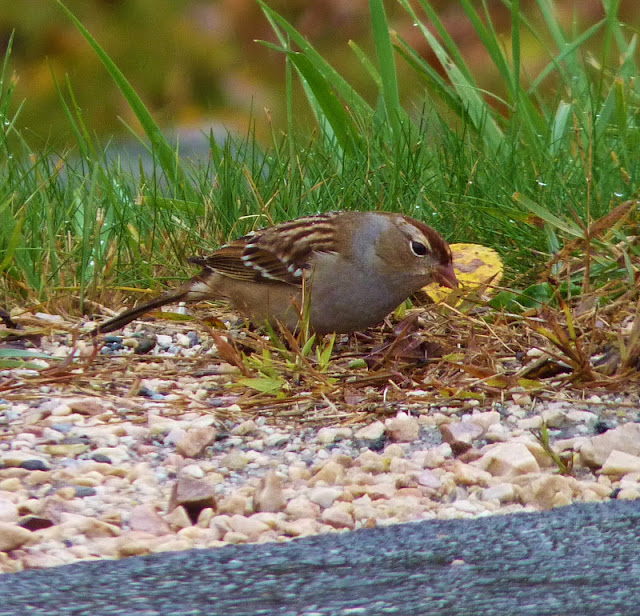 I tried to take photos in between rain squalls. Everything came out grainy or blurry but I managed to keep a few in focus. Several were picking through pebbles on the side of the road.

It's funny how things work out sometimes. I spent two rain-free days hiking through the woods for hours hoping to see lots of birds without much luck. Then I go for a short walk in the rain with no expectations and hit the birding jackpot. You just never know.
Posted by Larry at 4:47:00 PM

Your photos are great Larry, despite the rain. The pileated is one of my favorite birds; very nice capture there!

Steadyjohn-Thanks-The photos are grainy but at least they came out in foucs so I was happy with that.

Wonderful story and images Larry! I LOVE that pond shot with the fog/cloud! Congrats on all the birds sightings!

Kathie-thank you. There were photographers that morning that were waiting around from 3:30 am to get the perfect shot.Some photographers are very dedicated.

It is strange how that works some times. You just never know. And like in fishing its the surprises that can make ones day...:)

Wow first the second and fourth pictures have a wonderful atmopshere and then I'm very jealous about the pileated guy and the white-crowned ;-) Well done Larry!

troutbirder-I do see similarities between birding and fishing.

Chris-thanks-We are fortunate to have a healthy population of Pileated Woodpeckers around here.They have a large territory but they make enough noise to let you know they're around.