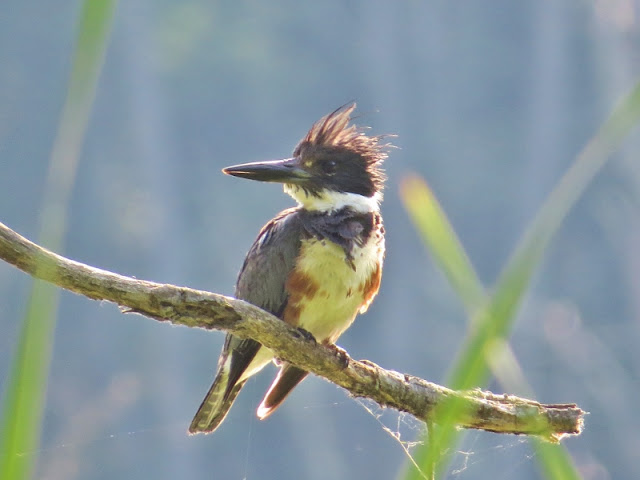 I see plenty of Kingfishers throughout the year. They have loud call and they're really conspicuous when perched on a branch. That is why it frustrates me so that I never seem to get a good picture of one. They fly off as soon as I think about touching my camera as though they know what I'm thinking. Maybe this Belted Kingfisher is a juvenile bird that doesn't have its street smarts yet. It stayed long enough for the photo although I was pointing right towards the sun. 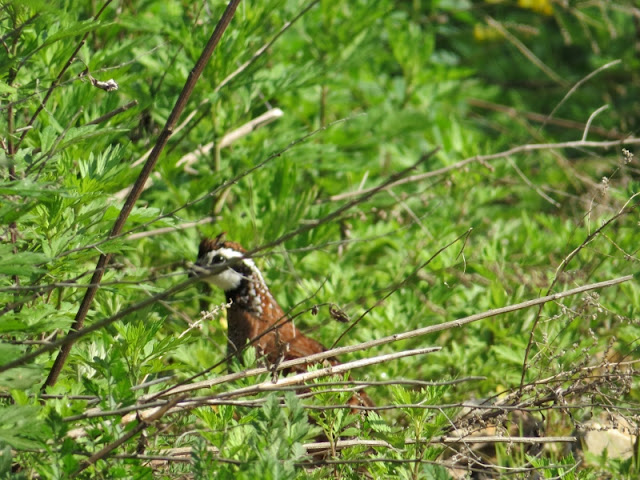 This is the second time I've found them at one particular powerline crossing. There were 2 adult birds this time and the last time I sighted them here there was a family of them. I've read that  Northern Bobwhites are somewhat rare in Connecticut so I'm wondering if someone is raising them nearby and releasing them? Either way it was interesting to see them!

This time of the year I continue to take short morning birdwalks hoping for an interesting sighting. On this particular day a friendly kingfisher and a couple of bobwhites made the morning worthwhile.
Posted by Larry at 1:08:00 PM

Awesome shots and I know what you mean about moving targets!...:)JP

Nice to see that Kingfisher and I adore his beak!

Last time I seen a Bobwhite we both scared each other! :)

Larry, I used to see and hear Bobwhites in Colchester all the time when I was young. then they became rare, but I did find a couple around Lake Hayward in East Hampton a few years ago. they are always a pleasure to find and I am so sad their numbers have declined. I know there is an effort underway to restore them to their original habitat in other states, maybe there is one there as well.

Larry I flushed 2 bobwhites a few days ago on the power lines, how cool. John said maybe someone is raising them, but great to see anyway. thanks for the great pictures. Debby G

They didn't even want Bobwhites reported a couple of years ago because they assumed they were raised and released by someone.I'm not sure what their status really is.