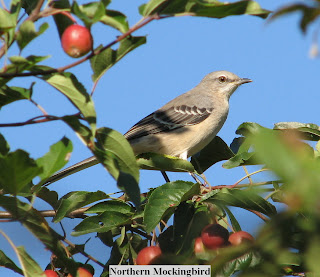 This past Saturday, I was standing at the edge of a field on Ridgewood Road in Middletown at 7am. The air was cool and dry on this beautiful Fall morning. I was leaning back against my truck, thinking about how The Boston Red Sox had won first place in The American League East division for the first time in 12 years. Even though the ultimate goal is winning The World Series, the team went all out to celebrate this milestone. I was glad to see that they did. There is no guarantee that they will even make it to The World Series, so why miss out on a special moment?

Many times in life the things that we look forward to may not live up to our expectations. Instead of finding a pot of gold at the end of the rainbow, we might just find a pot of-well you know what I mean. Some moments in life may seem insignificant when we are experiencing them, but as time passes, we may look back at those same experiences with fond memories.
As I was thinking about all this, 4 Northern Mockingbirds we moving about in some nearby shrubs. On this particular morning, I decided to take some time to watch them. I have seen them so many times, but how often have I really seen them?
Their long tails and grayish bodies stood out in sharp contrast against the brilliant blue sky. I watched as one bird performed it's territorial dance. It would fly several feet straight up in to the air as it flashed the white under its wings. It then swirled back down to the top of a bush and repeated this ceremony several times.
Another bird flew 20 feet to the right and landed on a different set of bushes. Seconds later, it looped back around to its original position. It perched at the very top, and we stared at each other for what seemed like several minutes.Then it reached down and plucked a berry.
I could hear some of them performing a softer version of their songs. Some Mockingbirds have been known to have as many as 200 songs or sounds in their repertoire. I find it admirable the way it defends not only its nest, but also its winter supply of berries. This is a bird that knows what it wants.
I later traveled around to several other areas by morning's end looking for a so-called "good" bird . I saw a total of 37 species of birds, but none captured my attention more than the Northern Mockingbird. Many would say that it is a common bird that will always be here for us to enjoy. The question is, will we always be here to enjoy the Northern Mockingbird?
Posted by Larry at 1:24:00 PM

I've always liked Mockingbirds. They generally put on a good show, and I don't have to travel far to see them. Doesn't get much better than that.

I have yet to see a Mockingbird and would be happy to come across one. They are supposed to be in our area.

We don''t have mockingbirds here near home but I saw my first in Phoenix last spring. I got to see them with new eyes as they were life birds for me. I'm glad you got to bird "in the moment". We all need to make an effort to do so more often and look at the old birds with new eyes.

Hi Larry,
I've never seen a Northern Mockingbird. We have the Brown Thrashers who also have many different songs in their repertoire, but they're also not very common, so I consider it a privilege to hear and see them.

wonderful post on the mockingbird and I am enjoying the moment for sure! They don't breed in this area and a rare site for us! BRAVO

Wren-I think it's good to observe what's right in front of our noses some times.

Mary c-It's good that you enjoy the singing-I do to.-Some people go bonkers about it when they can't sleep!

ruthiej-The Thrasher is the less common around here.-Let us know if you ever find that Mocker-they're easy to photograph.

monarch-It's amazing to hear that they are rare in some of your areas-We so take them for granted.

Question: Do you carry a journal with you on your outings? Your accounts are so vivid and detailed! They're wonderful. And yes, go Red Sox! My son was rooting for the Mets. There's nothing as sad as the face of a boy whose team let him down--unless, of course, it's the face of the pitcher.

Patrice-Being a Red Sox Fan since the early 70's-I know how your son feels.

I do carry a journal,but it looks like it was written by a doctor.-Messy notes that would have to be deciphered by an archaeologist.I know what they mean though-most of the time.

No mockingbirds here. I love their songs though. Except first thing in the morning while trying to sleep. Great picture of one.

I LOVE mockingbirds, they are very uncommon here though. I have never seen one in northern Illinois, although they are reported from time to time.

Your post reminds me of something I recently read about the progression of the bird enthusiast.

You start by a fascination with a bird and get more serious about finding more. Pretty soon, you have log books and are hunting for number 500, 501, etc. Then, somewhere, you notice that you are not really seeing the birds any more and begin to slow down and just appreciate them again.

We do take the "common" ones for granted depending what "common" is in our particular area, don't we? I like the mockingbirds and so enjoy listening to their many songs.

Sarala-Yes they certainly can be nature's alarm clock.

dana-Yes I've seen that progression in some.-I haven't really progressed.-I just try to make the most of each situation.-If I was seeing all kinds of new birds,believe me I would be looking at them.-It's just nice to know that you can approach birding in different ways.

Jayne-Yes-It's interesting to know that some of the birds in your area are a tresure to birders from different parts of the country.

Mockingbirds are fun--I always feel like they're mocking me, though, with all the songs! Whenever I hear one, I've usually spent some time trying to figure out what it is, and of course--it's the Mockingbird,every time.

Nina-it's also fun to try and figure out what birds the Mockingbird is oimitating.-It may even give you a clue of what other birds are in the area.