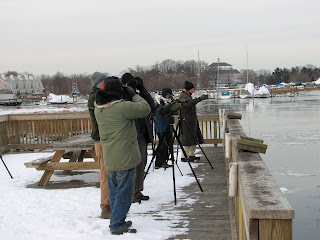 On Saturday, January 17th I met up with a group of birders in New Haven for a field trip that focused on covering a number of locations along the western shoreline. At our first stop, someone spotted a Black-headed Gull which would have been a lifer for me but by the time I zeroed in on the bird it was time to for us to leave . The gull was smaller than the others but had its head tucked in and facing the other way. Needless to say, that one didn't make my list.

The leader of this Hartford Audubon trip, Adrian, first introduced me to the species listing game referred to as "Big January" three years ago. I asked him how long the trip would last but already knew the answer-until it gets too dark to see the birds. Not everyone lasted until the end but those who did were rewarded with a days list that totaled 60+ species of birds.

After gathering at a public parking lot and quickly setting up carpools, we were off in a cloud of smoke. I'm not even going to bother trying to give you the details of all the various locations we visited. They included several stops in New Haven, Milford, Bridgeport, and Stratford. These trips are run at a frantic pace. When you arrive at a spot, you need to set up your scope, quickly identify targeted species, and be ready to move on to the next location in the blink of an eye. You snooze-you lose. This is not usually my preferred method of birding but it is an extremely effective way of adding species to your list. I missed out on a few species that were seen by others in the group including Horned Grebe and Long-tailed Duck. I probably got a glimpse of them in my scope but not enough so that I was confident of their identities. Even though I missed a few species, by the end of the day I was able to add 16 new species to my January list: Brant, Wood Duck, Gadwall, Eurasian Wigeon, American Wigeon, Greater Scaup, Lesser Scaup, American Kestrel, American Coot, Killdeer, Ruddy Turnstone, Sanderling, Glaucous Gull, Monk Parakeet, Field Sparrow, and American Pipit. 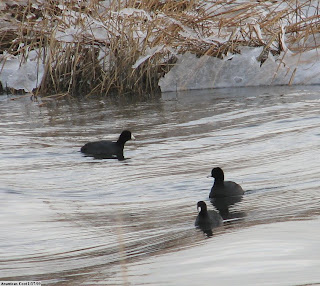 Let me fill you in on a few details about the day. First of all, it was quite cold. The thermometer never reached 20 degrees during the entire day but it was tolerable. I carpooled with a guy named Joe (he drove). We were loaded up on high test coffee which made for a surplus of rapid-fire conversation. This led to us missing a few turns along the way, thus we arrived at a few of the locations a little late. Joe spotted what was for me, the bird of the day. We had a terrific view of a male American kestrel with its colors fully illuminated by sunlight as he perched in the open on the edge of a tree branch. Kestrels have been few and far between in Connecticut lately-and oh what a terrific view it was!

Later that morning, we spotted a Merlin in a tree with its prey. It was plucking the feathers out of a bird which we believed to be a Snow Bunting. The funny thing is that we saw the whole scene take place as we were leaving a Dunkin Donuts. At least it gave me a chance to finish my sandwich. You see, on these trips there is an imaginary timer that lasts about five minutes in which you have to use the restroom, place your order and finish your coffee. If you dare get food-like I often do-you will be eating on the run. That is one of the rules of the Big January field trips. You eat, hit the restroom, and get back in your vehicle within five minutes. Otherwise, you'll be looking through a field guide in an empty parking lot and talking to yourself!
-
Another fun moment came when we made a stop in Stratford where we hoped to get a glimpse of a Snowy Owl .We never did see one, although I did spot a white plastic bag that looked sort of like a Snowy Owl off in the distance. We ran into the compiler of the rare bird reports for Connecticut (Roy) while we were there. As we were getting ready to leave, we saw him waving for us to come back. They had found a male Eurasian Wigeon , and all of us were able to get a nice view of it. Its dark reddish head made it really stand out amongst the others. We also made a quick stop at one beach where a Gluacous Gull had been reported. We barely made it out of the car before the Glaucous Gull flew right over our heads! You could easily make out the black-tipped pink bill of the predominantly white gull.


click to play
One of our last stops turned out to be a productive one. We saw 12 American Coot, 1 Wood Duck, a Belted Kingfisher, and an American Pipit within five minutes of pulling into a parking area overlooking a bay-(or whatever). Above is a quick video in which one of the coot looks like he caught a sardine or something. 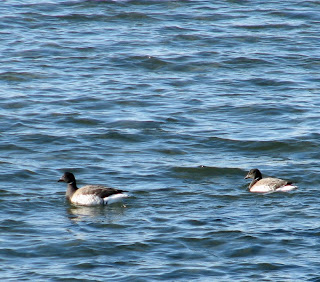 I didn't have much time to take pictures and of the 20 photos I did take of birds, none came out good. Here is a photo of two of the many Brant we saw on Saturday. They look like Canada Geese but are pretty much all black in the face and neck. We finally ended the day when we didn't even have enough light to confidently identify ducks that were twenty feet in front of us to be Mallards.
click to play
The next day brought us about 8 inches of snow. I took a ride over to the Portland Fairgrounds which is only a few miles from my house. As soon as I got out of my truck, I saw a Red Fox crossing the field. I barely had a chance to capture any video but did manage to capture it on film for a few seconds before it headed off into the woods. I walked about six miles through the snowy fields and trails on Sunday and only managed to add one new species, a Pileated Woodpecker. I'm not complaining though-a Pileated Woodpecker and a Red Fox sighting still makes for a good morning. I wonder where all the grackles and cowbirds are?
-
My January birding has pretty much been limited to weekends. I did manage to add a Fish Crow which has been hanging around a Copaco shopping center in Bloomfield for the last year or so. My total for January now stands at 86. I'll be back on my own again this weekend trying to add more species to my list but from this point on, it's going to be difficult.
Posted by Larry at 6:32:00 PM

I saw hundreds of Scaup but could not tell without help which were Greater or Lesser. I am dreaming about birds that I know are around but are evading me. Today I went to the bush to look for a Red-bellied Woodpecker and found 12 Robins. Totally unexpected! Hope you reach your goal.

I am LOLing about your starling comment. Believe me, I feel your pain.

I thought I was brave weathering the snow Sunday and going out in the woods, but I only went out a 1/2 mile or so!! You take the prize on that.

Very entertaing to read of your Saturday adventure. I cannot even imagine having to go at a pace as quick as that.

I will be following your blog and crossing my fingers that you make your goal.

Ruth-I must admit that I had the experts next to me-guiding me through which were lesser and which were Greater Scaup.-Much had to do with the head shape.-It's good that you are getting out there and looking.-That's the main point.

Kallen-Thanks-I'm glad you got a lauch out of the starling comment-especially since I meant to write cowbirds and grackles.-I actually haven't seen either yet this year.

I LOVE the fox! Coots are sweet little birds. I get a kick out of them.

Wow you birders up there are so brave...( or crazy..tee hee) to be out there in that cold.
Loved the fox video..

Larry, I think you are going to have the best January ever. You continue to amaze me with your drive and stamina through odd weather. I joked with Kathie that it would take me a year to catch up with your January!

Sounds like a great day! Oddly, Lisa and I had 86 for the month as of this morning. Today, we finally added Red-Winged Blackbird.

Have a great one!
Warren

such a wonderful birding day you had . . . I know a few of those birds would have been lifers for me! Bravo!

That sounds like a very fruitful weekend, Larry. Did you do as well this past weekend (the 4th and final weekend of January)? I'm looking forward to hearing what you managed for a total for January. And it will be fun to see if you totaled as many or more than Kathie (Sycamore Canyon) since you are both in totally different climates and geographic locations.

Mary-I am going to need to take a break and slow down once January is over.

Mary C-I'm sure Kathie will come out ahead. This little rivalry started because my species total was higher than Kathie's last year but I don't think she started her count at the beginning of January in 08. This year she was prepared to go all out.

-I was looking at a comparison of Arizona to Connecticut-280 breeding species of birds in Arizona compared to 173 in Connecticut.

-525 species of birds have been seen in Arizona versus 402 species in Connecticut.-These are rough estimates-I don't know if they're up to date. Arizona is a big state though so that could be a lot of ground to cover.-I am surprised that the numbers are as close as they are considering how small CT is and we have cold winters too.

Larry, how cool to see the gull and the Eurasian widgeon! It's fun to see where our lists overlap and where they diverge. You deserve an award for tromping around in all that snow and cold! At least I get to bird in warmer weather! I know how it goes with the list. After awhile you start to get a lot of repeats and finding new birds gets harder. I saw 21 species in Sabino Canyon but only added 2 new ones to my list. Then we birded Saguaro NP west on Sunday and I didn't see any new birds! We'll get about 2 weeks off before its time for the GBBC!

Larry, Just read your comment above regarding bird speices n our repsective states. You have an advantage in being near the shore and the woods bring out all those wonderful warblers. We get far less of them here.

Oh Larry, you have way more birding energy than I do. Congratulations on all your great sightings!
I have to say that I love your red fox sighting the best though. Don't you just love their big fluffy tails this time of year? What a pretty little animal.