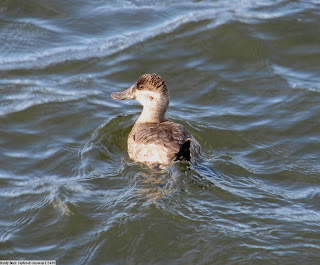 It has been a typical cold and snowy January here in Connecticut. Focusing my efforts on adding species to my list has definitely made the month more enjoyable but I'm looking forward to the conclusion of Big January. I found that my patience was growing thin as I struggled to add a measly six new species to my list this weekend. I've been cursing at species that don't have the courtesy to show up when I'm looking for them. I've also been calling other drivers "Buffleheads" when they get on my tail because I'm driving too slow while searching for birds. I suppose that's not really an insult, it just sounds like one.

Most of my success this weekend came in Old Saybrook. I was able to get my first really good look at Long-tailed Ducks (old Squaw) through my scope. The lighting allowed me to get a really detailed view of the markings and shape of these striking birds. I saw four of them all together including two males.

I moved on to a place around the corner from Saybrook Point that I've always referred to as the causeway. A portion of the water always seems to remain open there in the winter. It is difficult to get a good view of the birds here because you can't stop on the causeway. I thought I caught a glimpse of what might have been Bufflehead on my way over-(the duck not a driver) but I couldn't be sure. I parked my car on the end and walked all the way over to the other side. As you can hear from the video it was quite windy as it has been much of the month. I spotted about seven of them in the distance as I have before in this same location for the past three years. That's one thing good about doing Big Januaries each year. You start to remember locations that certain species always seem to be. It was on my way back that I my real surprise came...

I was pleased to find a Ruddy Duck swimming directly below the bridge and that was my 90th species of the month! A certain tune came to mind that Kermit The Frog used to sing, although my words are a little different for the occasion: -Ruddy Ducky-you're the one. Number 90 is so much fun! 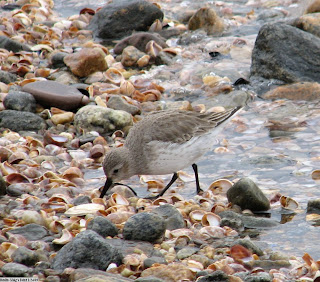 That same day, I also visited Hammonasset again. I figure keep on checking there until the well runs dry. The well finally ran dry for me at Hammo but I did manage to add a single species that has been eluding me all winter. I saw 6 White-winged Crossbills in the ornamental pines in West Beach Parking lot. They flew in, landed on some cones, and flew away after staying for all of 10 seconds. They were easy enough to identify though. I found some Dunlin (above photo) that were feeding along the shoreline edge near Meig's point. Nice to watch even though they were already on my list.

Here's the video to go with it. You can see how they have that down-curved bill. They are darker than the Sanderlings that you see in Connecticut during the winter. 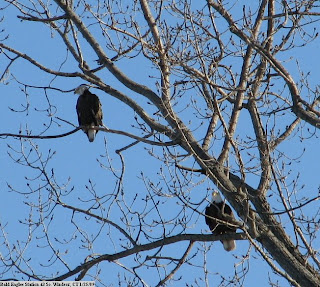 I was disappointed with my results on Saturday, especially considering the amount of effort I put in. I started out over at a place called Station 43 in South Windsor. I walked along a mushy, snow-covered trail until reaching an area where you have to cross a small stream. It was there that I saw my one and only new species at this location-2 Swamp Sparrows. After getting a nice look at the sparrows, I tried to calculate my best course to get across the tiny stream. I calculated wrong, as my foot went through some ice and into the water. I didn't last long out in the fields before I decided it best to warm my feet up in the truck. The only thing I saw of interest at the Newberry Road area besides the sparrows was a Belted Kingfisher. It put on quite a show of shake, rattle, and roll.
-
I drove to Vibert Road which is just a different access to the same series of fields-(big fields for CT). When I reached the end of Vibert Road, I walked about two miles through the fields. I didn't see anything new there. I was hoping for a cowbird or grackle but there wasn't a sign of either one. I did enjoy viewing a pair of adult Bald Eagles perched in a tree (above photo). 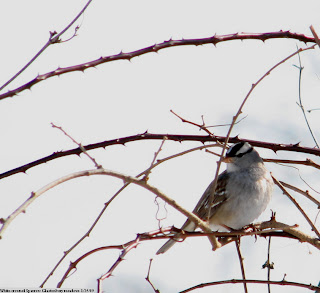 I was contemplating calling it quits for the day even though it was only about 10:30 am. My feet were freezing and it just didn't feel like my lucky day. Then a light bulb went off in my head-I've got dry socks in my back seat and maybe-just maybe an extra pair of boots kicking around in the back of my truck. I pulled my truck into a parking lot, opened my tailgate, and there they were- Winter boots! Like Popeye after eating a can of spinach, I was rearing to go again. Since there is no hunting on Sundays, I decided to visit Glastonbury Meadows which is similar to station 43 in some ways.
-
As I was pulling in, I saw a flock of Red-winged Blackbirds pass over. This game me hope for seeing the grackles and cowbirds again.When I got into the fields, I finally saw what could be a grackle in a tree. It was too slim to be a crow and too long to be a Red-winged Blackbird- unless of course it was two Red-winged Blackbirds standing end to-end. Drats!! Foiled again!! The only new species that I found after walking 4 miles through snow covered fields was White-crowned Sparrows. There's always plenty of them here and I always find them in the same location. So my total number of species after this weekend is 92. I have one more Saturday to try to surpass my previous year's total of 94. By the way things have been going, it would be difficult for me to reach 100 but you never know.
Posted by Larry at 3:51:00 PM

Great getting your numbers up! The Ruddy Duck . . . they are just the best little ducky!

I was wondering how you were doing with your January challenge. That is awesome!!!

" I've been cursing at species that don't have the courtesy to show up when I'm looking for them."

lol!! I thought the same way. Your report is very interesting. Bufflehead ducks are a dime a dozen around here in the winter on the river. Funny how species are distributed. Good luck on your last few day. With this latest bad snowstorm today, I believe I am done birding for this month unless something flies right at me.

I live near the CT coast and have never seen a Ruddy (guess I have to get out more) Great post!

You are correct to refer to it as the "Causeway". Sometimes, a more formal name is the South Cove Causeway.
http://www.lisrc.uconn.edu/coastalaccess/site.asp?siteid=565

Anonymous-If you walk the causeway, it may still be there.

Ruth-Usually Buffleheads aren't that tough to find around here in the winter but I had to look a little harder this year. Hope you get a break in the weather but it sounds like you gave it a great effort.

Mathew-I'll have to stop by your blog again-It's handy for a CT birder to know someone who is so familiar with the CT sound.

I am routing for you and hoping you reach 100 goal!

I'll give you a shout if I get em!

I love Saybrook Point and I miss all the beauty that is on that stretch of road. I wish you could drive to down to Virginia, I am sure we could get you up to 100 by the weekend. Have you been to Salmon River lately in Colchester?

Colleen-I did cover part of Salmon River in the Christmas Count. That area has more birds in the spring and summer.-I will visit then.-

*LOL @ "ruddy ducky."* I'm glad you had those spare boots.
A pair of bald eagles has built a nest in one of my local hiking areas recently. This is the 1st such nest in the area since Hurricane Katrina, 3.5 years ago. I'm looking forward to having a look at it.

Larry, I sure hope you did well earlier today and were able to add a few more species to your count. I'm looking forward to your next post giving us your final count for January. I suppose you'll be watching the Super Bowl tomorrow? Are you rooting for Pittsburgh? My father-in-law (who lives in Arizona) will, of course, be rooting for the Cardinals.

Mary C.-Unfortunately I was rooting for the underdog-Arizona-Really I'm a Patriots fan though.

Larry, that wet foot would have sent me packing, but I also carry extra shoes, socks, pants, etc. in my car. I hate to be so far from home and not have what I need. I'm glad you remembered the extras before your toes fell off! You are one dedicated birder. Gus and I had a similar experience. We went to Saguaro NP last weekend and I did not see one new bird. It gets that way towards the end.

P.S. I love that photo of the white-crowned sparrow!

You coastal birders are so lucky! Wow--a hundred birds! Congrats! Maybe I'll try to have a "big February!" I'm planning to spend as much time birding as I possibly can, before I move (in July) to California--a lot of Eastern birds I need to get before I leave!