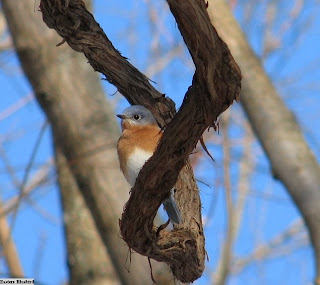 I started birding this weekend on Saturday by participating in the Hartford Audubon Christmas Count on Saturday. It was originally scheduled for December but postponed due to snow. I was assigned a list of some new areas to try that were all new to me. Birding new areas always intrigues me but the combination of low temperatures and high wind made the birding conditions unpleasant. The highlights on this particular day included 2 Bald Eagles, Rough-legged Hawk, Brown Creeper, and Hairy Woodpecker. I saw all of these species near the ferry park area in Glastonbury. As I scanned my binoculars across the icy river, I spotted what appeared to be two chunky white geese in the water. I was excited because I thought they might possibly be a species that was new to me but they were quite distant. I hurried to my truck to get my scope and tripod. When I came back, the geese were just barely in view further down the river. I pointed the scope towards them and saw.....nothing. One of the lenses inside my eyepiece had come loose and I couldn't see a thing. That was the end of that. That's what I call a Charlie Brown moment.

I visited another cool spot called Addison Bog Preserve which was also in Glastonbury. It's strange that a black spruce bog would be hidden behind a condo complex. I counted 14 Golden-crowned Kinglets in the cedars along the trail. It also leads up to some power lines that offer some more birding opportunities. I didn't get a chance to check out the bog itself but plan to make another visit there in the spring. 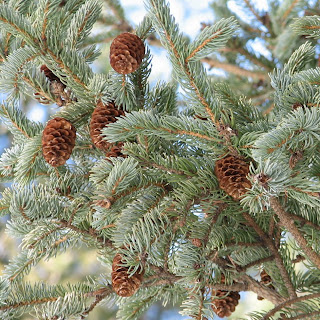 I read about a few White-winged Crossbills showing up in places like Barkhamstead area and Hammonasset lately. Although I had my fingers crossed while visiting both those places, I didn't find any crossbills. The only things that were crossed were my eyes after staring at all those pine cones. I read an interesting article about where to look for White winged-Crossbills . It tells you which types of coniferous trees these birds prefer. It would be a lot of fun to find a White-winged Crossbill in an area where one has not yet been reported. No luck so far but if they stick around long enough I hope to find some eventually. 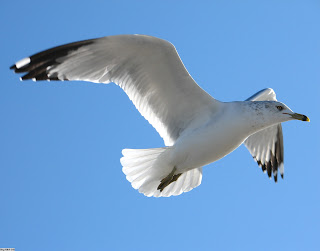 I took a trip to Hammonasset on Sunday which turned out to be another cold and windy day. At least the sun was out this time. There were quite a few gulls around... 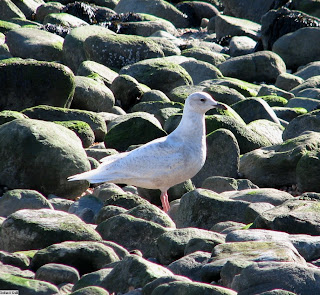 I came across species number 56 today at a surprising location, the mall. As I was walking out of the mall, I heard what sounded like Cedar Waxwings. I figured that it was probably starlings which are much more likely to be seen at a mall and do make a sound that reminds me a bit of waxwings. I looked up in the top of a seven foot tree surrounded by a block of cement and there were six Cedar Waxwings. They were close enough that I could have touched them with my hand. Hopefully I can resolve my eyepiece problem quickly so I can get on with my list.

Here is a video of the Connecticut River as seen from Glastonbury on Saturday. Turn your volume down if you don't like the sound of wind blowing into a microphone.

I was wondering why you hadn't posted in so long, then I found out that somehow you were dumped of my RSS feed thingy. Well, I put you right back on!
Thanks for the interesting link about the White-winged Crossbills. There have been pretty many spotted in northern Minnesota this winter. It's been a good irruptive winter for Redpolls too.
The gull in flight photo is really beautiful.
Happy New Year!

Nice pictures! We have had literally 1000s of WW Crossbills this winter in our area. I saw my first ones yesterday, a flock of about 25 birds. They were mixed among Redpolls and GC Kinglets, all feeding on spruce cones. You have challenged me with the January count and I saw my 41st bird today, a flock of wild turkeys. There are 160 birds found consistently in all of Ontario in the winter. Not all of them are in our area though. I will be happy to find 60 in January.

I am so jealous of your GC kinglet find. I go out of my way to search for them and you hit the jackpot!

Nice pictures here, Larry. Do you digiscope them or use a telephoto lens?

I did some drive-thru birding at Longshore park in Westport yesterday, and saw a canvasback duck. A first for me! Bad weather and holiday travels have kept me from my usual haunt, Sherwood Island.

Hi Larry,
That's a lot of birds for just a couple days of birding!
I hope you can get your scope fixed.
The river seems to be running pretty fast and high--are you guys experiencing some mid-winter flooding?

Lynne-I recently tried to change the title of my Blog from all capital letters to capitol letters only on the first letter of each word.It hasn't seemed to work so far but maybe it altered something. Anyway, thanks for putting me back on.

Ruth-Sure-rub it in why don't you.I'm glad you've decided to keep track of the species in January. You may surprise yourselfwith how many you see.Naturally,it does get harder as you go on. Good Luck!

Kallen 305-That was about the only birds of note that I saw in that area.It was just a spot that had what they wanted I guess. Sometimes they're not as noticeable.I pick up their little ringing sounds and then see them in the tops of the trees fluttering.-On this day-they were feeding low in the cedars at times.

Susan-I use a 12x Canon S2IS camera for all my photos and videos.It is only about a $200 camera.You have to get close to the birds and have good lighting to get good photos but bigger birds like gulls don't have to be as close.I would like to try dgiscopig in the future but don't have an adequate scope right now.

Ruthiej-That's not bad for me Ruthie but other birders I know would call that a poor total for 2 dyas.I'm not that obsessed with getting to a high species count right away.I'm going to have to do something about the scope problem quickly one way or the other.The river does tend to flood easily in our area. It's a little high but not at flood level right now.

Larry, I am only one bird ahead of you at the moment. I can tell this is going to be a real challenge. If we both keep up this pace, we will go well over a hundred birds this year!

Kathiebirds-100 would be great but that would be tough for me to reach.I would have to take some days off from work to get to that total I think. The ducks have been a little slow getting here this winter. Hopefully that will change before the end of the month.-Like maybe-this weekend.

Hi Larry,
I saw some birds in an unexpected place the other day. I was sitting the waiting area in an emergency room when to my surprise 2 Bluebirds flew down to the ground outside the big glass window I was sitting near. It made for a nice temporary diversion.
Belated Happy New Year,
Vern

I think the sound of the wind made the video chilling.

Sorry about your scope--that's a bummer. Can it be fixed, or would that be too pricey?
I love that shot of the bluebird. The seagull's cool, too. Often people don't appreciate gulls, but they're actually quite lovely little fliers, y'know?

Pa-birder-That was nice that the bluebirds gave you a diversion.Is everything okay?

Mary-The wind made me chilling!

Lana-I took care of the problem wth the scope-now I need to outsmart the snow.