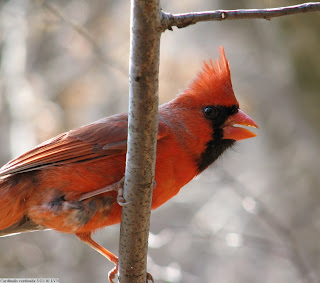 I celebrated the official start of the Spring season by visiting some local Nature preserves in our area. One of the places I visited was Smith Park which is located behind the Moody School in Middletown. I was walking along a path that circles around a small patch of woods when I saw a Red Fox standing beside a vernal pool. I was concealed behind some branches but the fox ran off when I reached for my camera. Immediately after the fox disappeared, a male Northern Cardinal landed on a branch directly in front of me. He looked me right in the eye and was so close enough to peck me on the nose if he wanted to. (click on his photo for larger view). 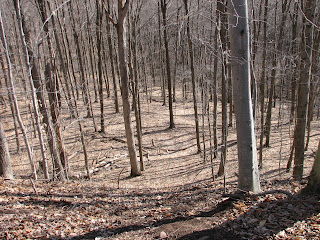 Another place that I visited this weekend was the Abe Tomkin Nature Preserve. The entrance to the trail is located within a residential neighborhood on Cedar Terrace in Portland. The sign for the entrance is partially obstructed by a small evergreen. I followed the trail down a steep ravine, crossed a stream by way of a small bridge, and then climbed back up the steep hill on the opposite side. I held onto some tree roots in a few spots because the leaves were slippery as I approached the top of the hill. There were several trees labeled with signs which denoted such species as Black Birch, Tulip, Sycamore, Pignut hickory, Yellow Birch, Northern Red Oak, Eastern Cottonwood, and American Hornbeam. The trees were labeled by Eagle Scout Drew Rusnak and Glastonbury resident Ed Richardson in 2003. 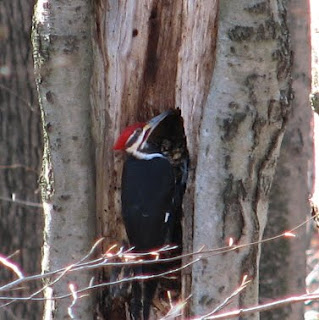 At the top of the hill was a large open field used for hunting. I could See a hunting blind and deer stand at the edge of the field. I was at the edge of the field looking down into the woods when I saw this Pileated Woodpecker hammering away at a tree. You can tell from the photo that this a male. The crest is red all the way to the base of the bill and you can also see a bit of his red moustache. Females have a red crest which is black at the forehead and they have a black moustache.
I also witnessed some interesting bird behavior by two woodpeckers that were at the opposite end of the size spectrum from the pileated. Two male downies were clinging to base of a tree that was about 4" in diameter. They repeatedly peaked around the tree and stared at each other as they flicked their wings in an outward motion. They started scaling the tree and continued with this behavior as they ascended towards the top. They were moving their bodies from side to side at times. It is hard to describe every detail of this encounter but I watched them for quite a while before continuing on along the trail.
The stream turned into a swampy area at the end of the trail. I could hear many birds singing in the area but one song in particular had my attention. It that of a Winter Wren whose song is described by Peterson as follows: a rapid succession of high tinkling warbles and trills, prolonged, often ending on a very high, light trill. I've only had the chance to hear these birds sing a couple of times in Connecticut so this was an unexpected treat. On my way out, I was startled 5 deer suddenly springing up from a nearby patch and running off in leaps and bounds. 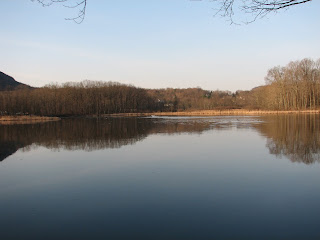 I visited Highland Pond Preserve on Sunday. it is located near Saw Mill Road in Middletown. I was a little disappointed when I first saw this place because I was expecting an area that would be a little more secluded. There were roads and houses all around it but I decided to follow the trail around the pond to have a closer look. The land surrounding the pond includes marsh, some wooded areas and a brook. 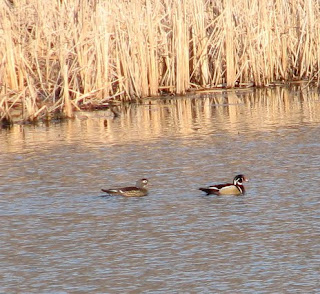 I was glad that I gave this place a chance or I might not have noticed it was a desirable place for Wood Ducks (above photo) and many other species of birds including: Red-bellied Woodpecker, Mute Swan, Canada Goose, Mallard, Yellow-bellied Sapsucker, Red-winged Blackbirds, Belted kingfisher, Eastern Phoebe (everywhere this weekend), White-throated Sparrows, and Yellow-rumped Warblers.
I've come to really appreciate areas of land that have been set aside for preservation. I've found that it's best not to have high expectations when visiting such areas. I like to discover what it is about each area that makes it special and then appreciate it for what it is. These areas which are often overlooked may offer a quiet place to observe birds and other wildlife.
We had fantastic weather in Connecticut this weekend. The sun was shining and the temperature reached highs near 70 both Saturday and Sunday. It was a great start to the Spring season and we've only just begun!
click to play Pileated Woodpecker video- (warning: shaky video).
Abe Tomkin and Highland Pond Preserve are both properties owned by: Middlesex Land Trust
Posted by Larry at 8:20:00 PM

Hi Larry,
it looks like you celebrated the spring correctly... I mean to see all these birds: The pileated video is superb even if it is a bit shaky ;-)
Funny behavior that you observed with the downy.. isn't it part of a courtship behavior??

Chris-I thought it looked like courtship behavior too but they were both males.-Maybe territorial.

...our downies have been acting a bit strange too. I assumed it was territorial also. Loved the pileated photo and video. They are so secretive around our woods it's often hard to photograph them.

Sounds like a nice day. GREAT cardinal image. You can even see a web strand!

Great photo of the cardinal.
And yes, it was a spectacular weekend.

I like your approach to small local preserves. They are not Barn Island or Milford Pt, but they need to be appreciated for what they are.
Consider the alternative. Imagine if they weren't there and it was more housing or a Staples instead.

Hi Larry, some great spots you found, i will have to check some out. Great shots

Kelly-I don't usually have much luck getting close to Pileated Woodpeckers-Hopefully, I'll be able to get better Pileated photos in the future.

Zen-Thanks-I'm usually not that pleased with the results of my photos but I was happy with that one.

Dan-That Glastonbury spot is pretty good and can be paired up with other stops in the area.

Really nice photo of the cardinal. Also, great point about appreciating areas of land that have been preserved.

Fantastic shots Larry,the Cardinal is my favourite.
Great stuff,also thank you for your comments on our Blog.
John.

Larry - I think we are finally sending you our white-throated sparrows from down here. It really isn't all that fair, as we see them in droves all winter and then once they start singing that lovely tune - they head North.

Warren & Lisa-I was curious about you comment until I actually took the time to read my blog post-something I should probably do before posting). I intended to say that Eastern Phoebes were everywhere last weekend-not so much White-throated Sparrows which have been here in good numbers all through the winter.

Great discussion on the pileated. Never thought to look for those distinguishing characteristics. I'll need to go back and look at my photos. Spring mating rituals, if you don't get embarrassed for watching, are amazing. Keep sharing! Thanks, Tucker

John-said-"Never thought to look for those distinguishing characteristics."- Neither have I up until now.I'm usually just excited to see one before it flies off but I was able to watch this one for a while.-thanks for the comments.

Larry, you sure do get around and what a lot of birds you were able to see!

Kathiebirds-It may seem like I get around but what I've really been doing is checking out as many places as possible that are within 10 miles of my house.

Really nice photo of the cardinal. Also, great point about appreciating areas of land that have been preserved.