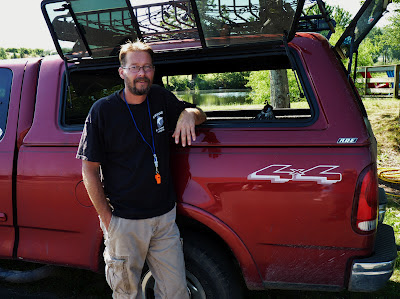 I recently visited Rose's Berry Farm in South Glastonbury. Erik Swanson was there with one of his falcons. Erik uses trained falcons to help scare berry- eating birds away from the crops. Which species do the most damage to the fruit crops at this farm? The answer to that question is the European Starling. Erik also uses falcons to keep birds away from the landing strips at certain airports. 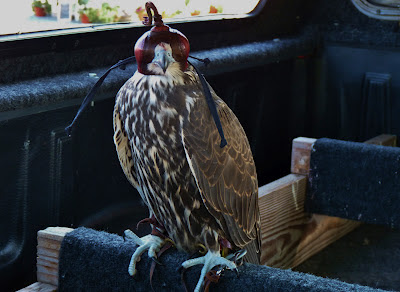 I went to the farm to buy some fresh fruit but also wanted to get a close up look at one of the falcons. This one was wearing a hood which helps the birds to stay calm when it's not out in the fields working. The hood reminds me of a prop from a 1950's science fiction film. 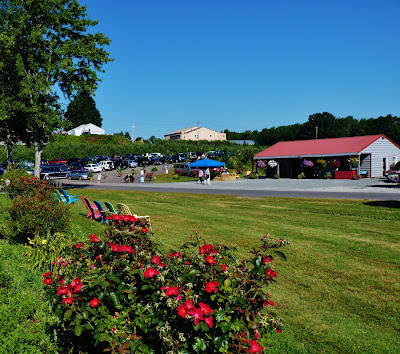 Rose's also serves breakfast on the weekends during the summer. They use fresh fruit from the farm in their recipes. that's about all the posting I can manage for now. I'm still waiting for the humidity to go back to where it came from. Five minutes on the computer and I feel like I've been in a sauna!
Posted by Larry at 8:57:00 PM

I haven't heard of this before, but think it's very cool. Thanks for this informative post.

Hope you enjoyed the fruit you bought.

Hi - will you post your Blog at The Birding Community ay vorts.com? Our members will love it!
It's easy just cut and paste the link and it automatically links back to your website. You can also add Photos, Videos, Articles, Questions, etc. It’s free and easy…
Connect with other Birders from around the world.
We are looking for contributors to share stuff with our members. Please help.
Email me if you need any help or would like me to do it for you.
The Birding Community: http://www.vorts.com/birding/
Thanks,
James Kaufman, Editor
Love the pics!!!

James-I've been a bit of a blogging slacker lately but I'll take a look.-thanks