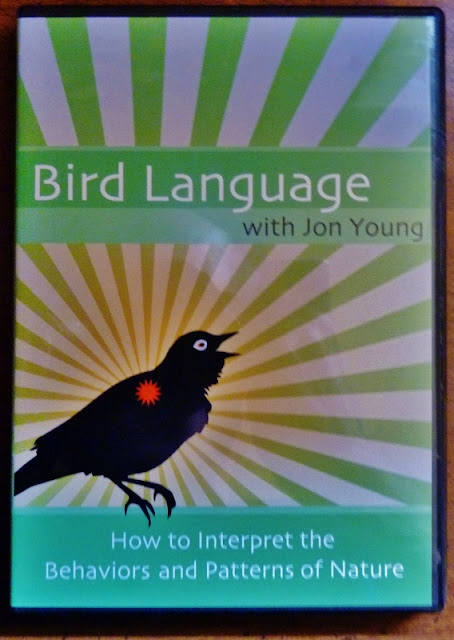 I  recently watched a DVD titled: Bird Language with Jon Young. I requested a complimentary copy for preview because the title caught my attention. I wondered how much can you really learn about bird language and what was this video all about?

It turns out the video has more to to do about observing bird behavior than it does about bird song. In the DVD Jon Young explains that it is possible to determine whether birds are reacting to a harmless animal, hawk or other predator based on bird behavior. There are clues in the way birds fly off from a location and by the way they position themselves in shrubs or trees. The video also explains how you can increase your opportunities for observing wildlife by paying attention to what birds are telling you.

The second disc contains additional material including a segment  showing multiple observers spread out in a large open field. They observe interactions between birds and animals and make notes of what they see on homemade maps. Later, they meet to discuss their findings. I would imagine it must be difficult to find birders willing to commit to this type of observation project but wouldn't mind joining in with a group that's already established.

Jon spent several years observing birds from the same sit location. He has also visited native tribes living off the land whose survival is dependent on their ability to understand the behavior of birds and animals.

After watching the video I believe it is possible to predict what birds are reacting to based on their behavior and vocalizations. It's not always going to be an exact science but the fun is in discovering new things for yourself. The video was made on a small budget that wasn't designed to impress you with its stunning visual effects but I was inspired by the overall concept. It encourages a holistic approach to birding rather than just seeking out and identifying individual species. I am looking forward to enhancing my experiences with nature by applying the principle lessons presented in this video.

(I'm reading a book now by Jon Young titled: "What The Robin Knows"  It covers a lot of the same material on the DVD but goes into more detail).
Posted by Larry at 5:10:00 PM

This sounds like a different approach from the usual birding which is good. I do grow tired of the find the bird-identify the bird-list the bird routine.

Anonymous-I like to vary the way I go about birding too. Anything that gives importance of observing common species of birds is a plus.

Patience and carefull observation. I'm probably the only birder in the world who combines that activity with long hikes for my big GSD. We do slow down to observe and identifuy.... but not for very long. :)