I Gambled On Finding Broadwings Locally And... 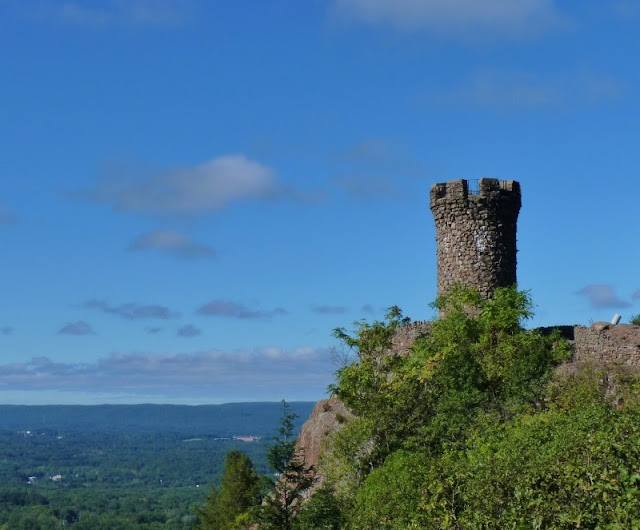 I've enjoyed visiting some of Connecticut's Fall Hawkwatches over the past few years. You can learn a lot from spending a day with experienced hawk watchers . Most of the hawk watch sites are about an hour or more away from where I live. There are only a few opportunities over during a 2 week period in mid-September to catch the peak of the Broad-winged Hawk migration so trying out an unproven place is a gamble. If I strike out I might miss the opportunity to witness this yearly spectacle. I've asked if there were any places to try that were closer to where I live and one of the suggestions was Castle Craig  in Meriden so I parked at the locked gate and climbed up the trail to the top of the tower. 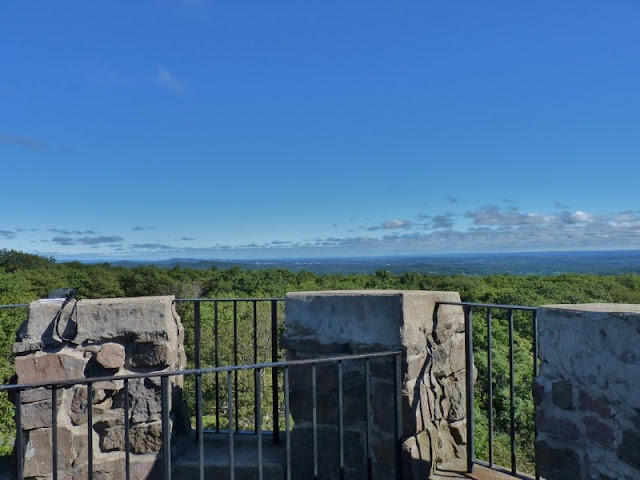 I searched from the top for  2 hours and my best sighting was a line of 12 Broad-wings passing by. I also saw a Bald Eagle, a Red-shouldered Hawk, a Merlin?, a few sharpies, and the usual assortment of Common Ravens and Turkey Vultures. I was a bit disappointed. Conditions seemed perfect with Northwest Winds, moderate cloud cover, and a view in every direction but for some reason I didn't see many hawks.

I did meet dozens of hikers and some of them had me take family photos their cell phones. Others were curious about what I was looking for. 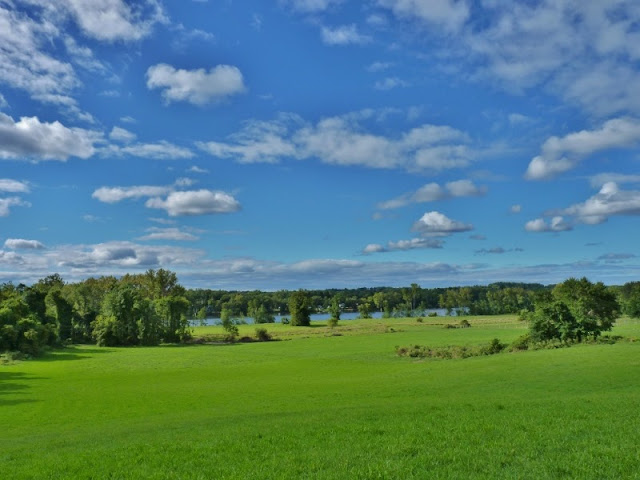 I came home at about 1:30 Pm and decided to head down the road to a nearby field along the Connecticut River. I've seen a handful of broadies pass through there in past years but never gave it a serious try under the right conditions. I set up a chair and started searching towards the north. I've been told that if you draw a straight line through a Connecticut map from the southwest corner of the state to the northeast corner you will find that most migrating hawks stay north of that line if you are doing inland hawk-watching. Portland is just about on the border of that line so I figured my odds of seeing large numbers of Broad-wings was low. 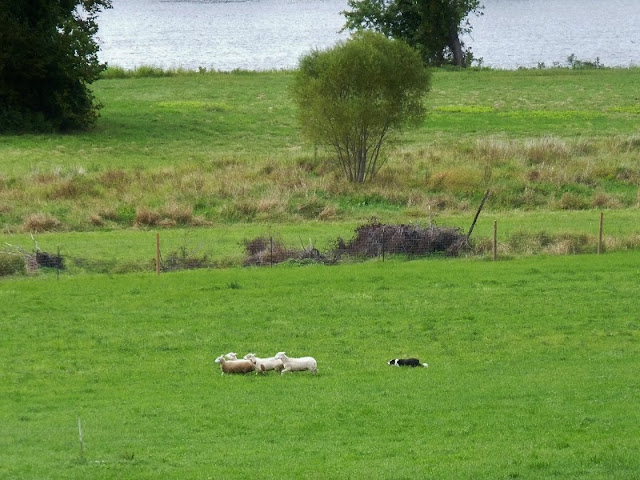 I realized that doing a hawkwatch by yourself can be a slow activity and the last time I checked there was only one of me. To pass time, I put the Red Sox/Yankees game on the radio and watched a dog was being trained to round up sheep in the field below. It seemed that he was more interested in sneaking up and spying on them than actually getting close enough to make them turn around. 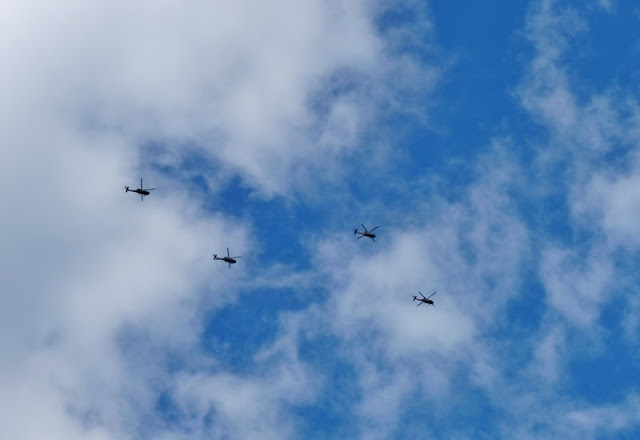 My attention was broken when 4 helicopters passed over me. 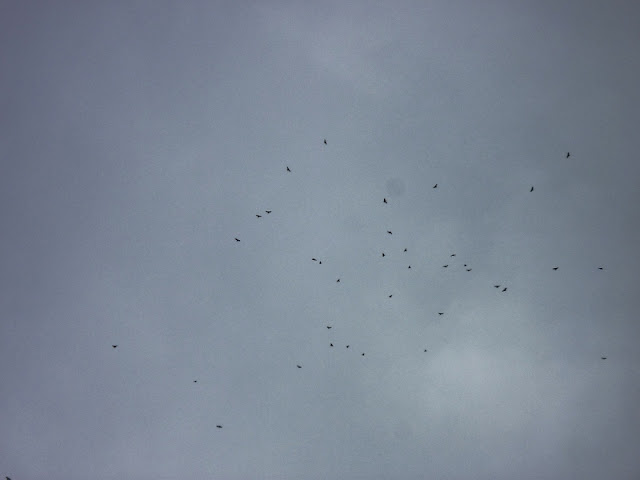 I started to follow them into a dark patch of clouds and then BAAAM-Jackpot! I counted 67 Broad-winged Hawks forming a kettle (you can't see all of them in the photo). That was at 2pm. At 3:30 Pm I saw a few more pass overhead. Hawk watchers will tell you if you see a few then keep watching because there may be more right behind them. By 3:40 Pm I had counted another 100 moving through in a line. In between times there were 9 more stragglers.

It was Nothing like the 100's or thousands you can see a prime hawk-watching site but the fact that it was right down the road from me made it that much more rewarding. I wonder how many I would have seen if I spent the entire day at this one spot?  Now I have the option of experiencing the Fall Hawk migration close to home. I just have to pick a day when conditions are favorable. Some times it pays take a chance.

I'm still a newbie at this but a couple of good blog articles to check out on this subject can be found here at: Stokes Birding Blog and at Under Clear Skies . Also see : HawkCount.
Posted by Larry at 7:49:00 PM

Congrats! That is exciting. Your patience paid off. I would love to see these hawks. Right now our Common Black Hawks, Zonies, Swainsons are all heading south and it has been fun watching them.

Chris-Thanks-It is so much different than other types of birding but I like the change of pace.

Wow, awesome. I have yet to make it to a hawkwatch site but it sounds like a cool experience.

Simply wonderful..it does take patience to "bird wait", so glad it payed off..and as always, thanks for the CT tips which I might someday..use ;-) Loved the dog & sheps diversion!

Jen-Hawkwatching is a different experience because you staying in one spot.They're great if you catch them at just the right time when the hawks are coming though in big numbers.

Cindy-It did pay off but i had a few failed attempts before that.

Hey Larry, Love to see those kettles. Come on down to Boothe in Stratford one of these days. We had a few great days this week. I was lucky to be there on Saturday when we had 830 fly over in one hour. That was tough with only two of us. I need to check the weather to see what this weekend will bring!

lynnjones11-830-that's a great concentration for just one hour.
It's hard to stay local when I see big numbers like one or two thousand in other areas but I'm going to try to stick to it this year. I've never been to Boothe in Stratford. Maybe I'll check it out.