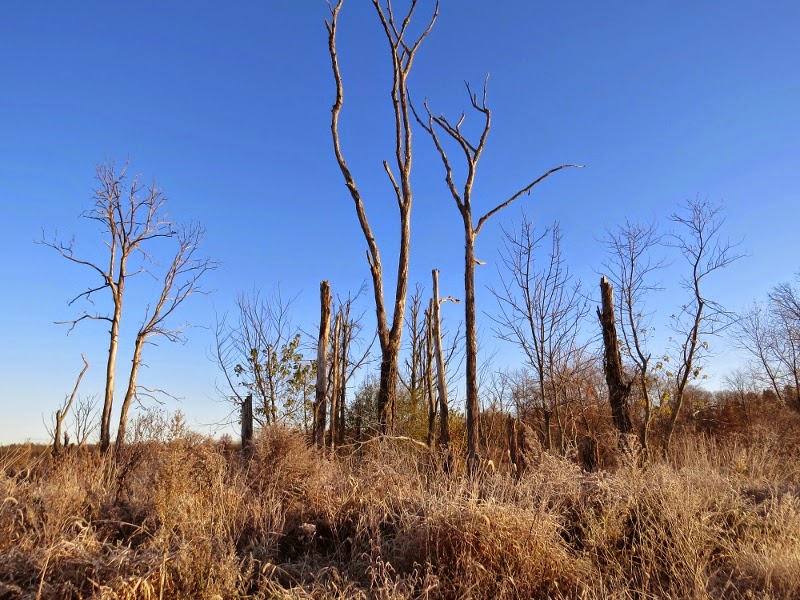 I generally tolerate cold weather fairly well but I was not ready for the sudden shock of temperatures in the 20's when I first walked out the door on Saturday. A persistent breeze made it even colder. I consulted with my car and we made an executive decision that it was going to be a birding-by-car-only day.

We started out at the Durham Meadows near the fairgrounds. I believe the area is called White Farm. There is a long line of dead tree snags that you can pull your car up to in case a bird lands to perch on one of them. 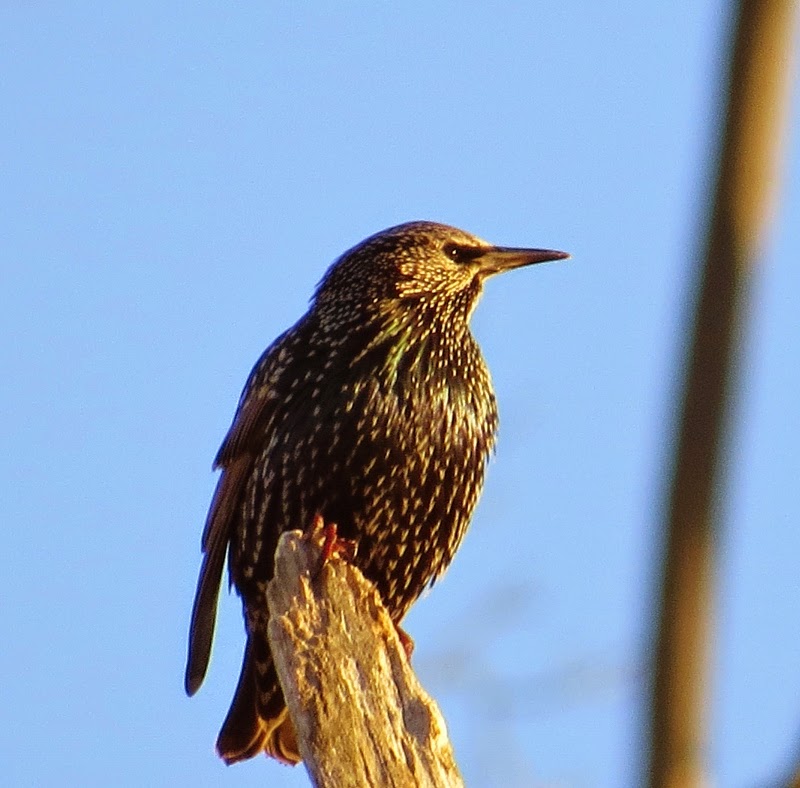 It seemed like a good idea but the only birds that landed on them were starlings. They may not win and popularity contests but they are sort of pretty this time of year. The white spots on their breast are a forecast that snow will soon be on its way. 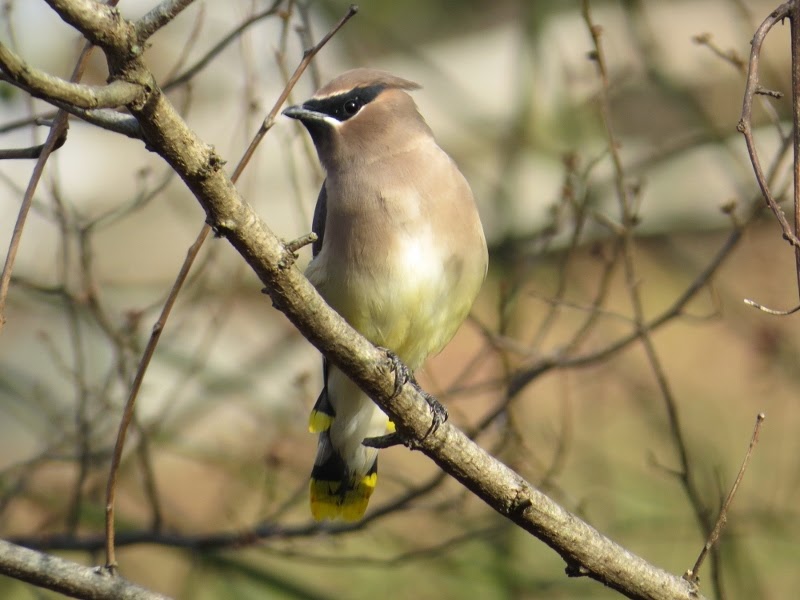 I caught a few waxwings chomping on some berries. they say that these birds sometimes become intoxicated by some of the berries they eat. 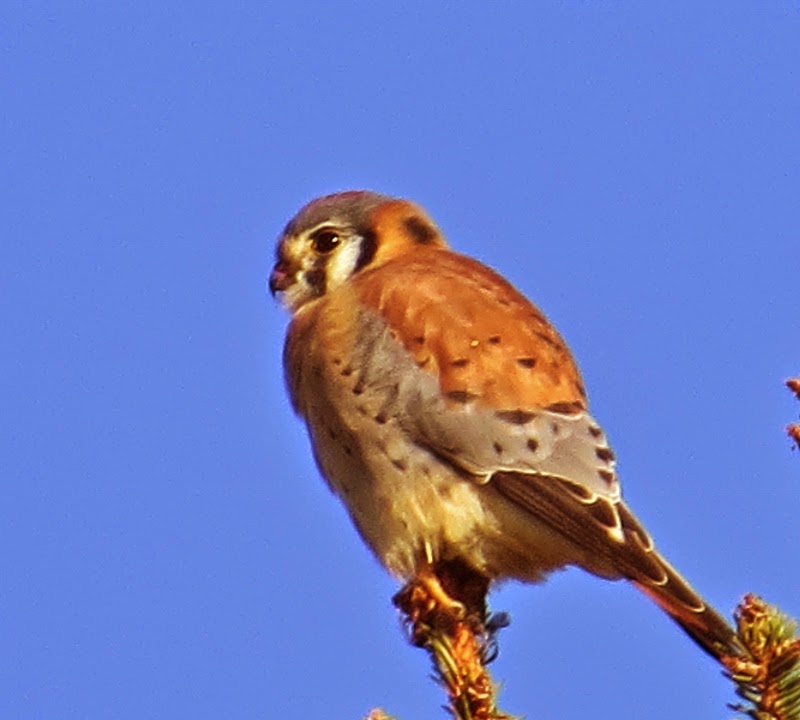 I've found that it has been a good year for kestrels in the local fields that I visit. This one was high up in a giant evergreen near the Durham fairgrounds entrance. 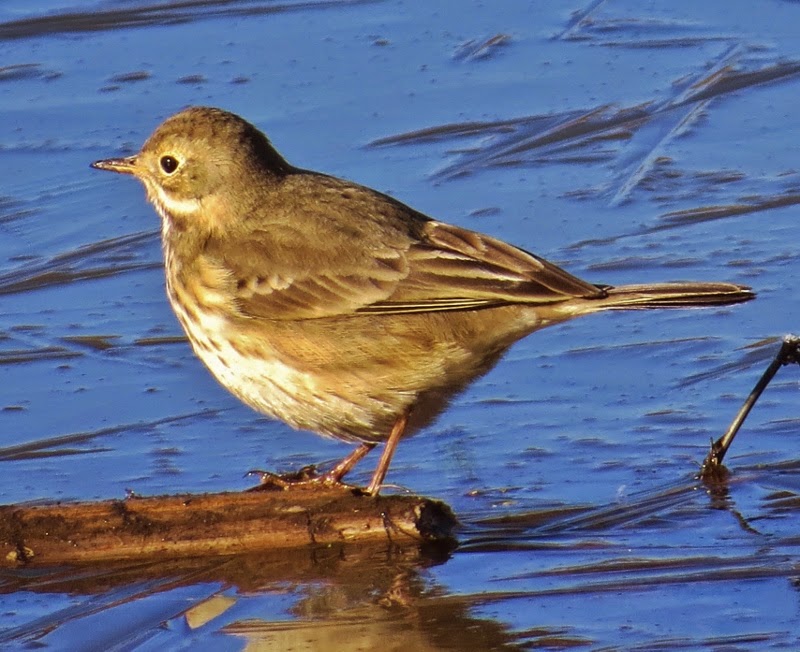 I stopped by a skating pond along route 68 which is off of 16 in Durham. At first, it looked like nothing was around but then I noticed several American Pipits working their way across the pond picking out bits of food from the weedy debris sticking up through the ice. 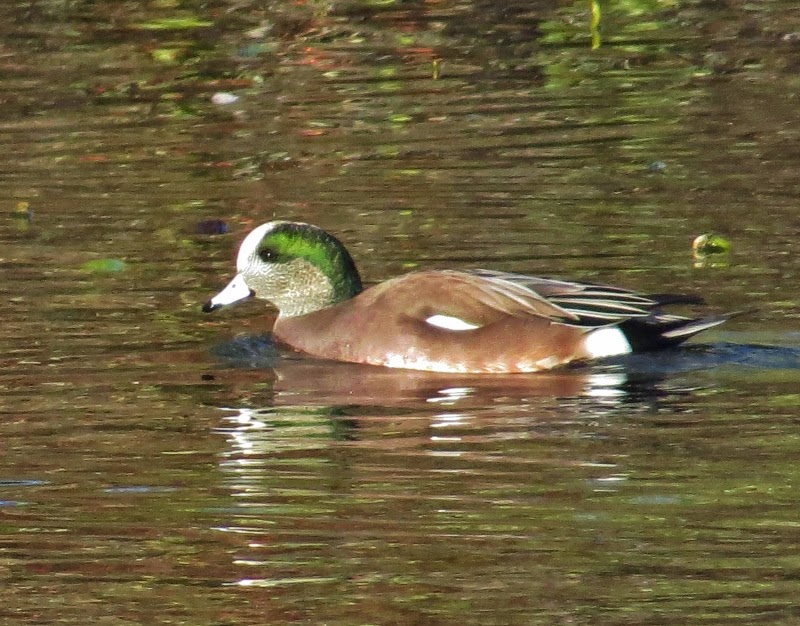 There are a whole circuit of ponds off of route 68 between Durham,Wallingford, and Meriden. Besides the American Wigeon in the photo I found Buffleheads, American Coot, Hooded Mergansers, Green-winged Teal and lots of other good stuff.

I probably would have seen more if I had put more effort in getting out of the car but there are several advantages of birding from your car such as:

Of course, I'm not going to stay in my car all winter. It's not as good as being out in the field enjoying the great outdoors but birding by car can be a good option when you're dealing with wicked windy winter weather.

Sudden change in the weather weather cold or hot does affect our thoughts about going birding!

I hadn't heard that about Waxwings becoming intoxicated, but we have a small cockatoo, the Gang-gang, which I have heard something similar about. They certainly allow close human approach at times.

Ah yes, car birding! The coffee benefits are enough for me alone on a cold winter morning. Luckily we have a wildlife refuge nearby with an auto route where you're not even allowed to get out of your car in the winter. Stay warm!

I have to say that for staying in the car, you found some great shots!

I like the list of benefits to car birding and you managed to get some amazing shots! A perfect blind, I need to try that.

I have used a car as a blind in my driveway, If I stand there, no birds..If I sit in the car, voila!
Nice finds from your blind!

What's that say about us that birds are more afraid of people than cars?

Lovely captures, Larry! Thank you so much for sharing.

The same thing happens to robins here in the fall...when they over do with the Mayday or Pincherry berries. They totally strip the trees of ever single berry...poo purple on houses, cars and anything else in range... and narrowly miss hitting the side of the house and especially windows while flying erratically... it's crazy!

What a great place to catch birds "on a stick" like another birder is doing for his series....especially if you don't have a "Stick" in your own yard ....

Gotta watch out for those crazy robins! Catching birds on a stick-hadn't quite thought of it that way but it makes sense.

Wonderful pictures . . and . . I like Cynthia's idea for a car driveway blind. And Larry, you may borrow my mental survival mantra: Spring is just around the corner.