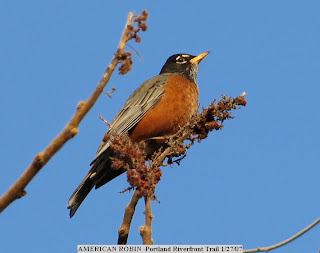 I spent a couple of hours birding Saturday Morning. First, I decided to take a ride over to Cox Road in Portland to check the power line crossing. I saw 5 EASTERN BLUEBIRDS and 1 HERMIT THRUSH picking at berries from the cedar trees. I didn't even need to get out of my truck to see them (but I did anyway).
Next stop was Portland Fairgrounds and Wangunk Meadows. On the way, I ran in to an acquaintance who is handling animal patrol on the weekends. He told me about a 30 pound Rattlesnake he had to relocate over the summer in Portland. He also gave me some information about where and when to see certain ducks in the area.
I drove to the end of the fairgrounds and parked near the river across from the overgrown weeds. From my understanding, this section was purchased by Mattabeseck Audubon. Before I exited the vehicle, a boldly patterned sparrow flying from the weedy patch to the other side caught my attention. I walked over to see if I could find it. What popped up on a branch was a FOX SPARROW . This one was very colorful! (red variety)
It was very cold-maybe about 15-20 degrees but with very little wind. I didn't have much time, and wanted to find a Creeper to add to my January list.
I was fairly confident that I could find one if I followed the river trail to the area where it narrows and enters a densely wooded area that has lots of scraggly trees. The BROWN CREEPER was there as I had suspected. Along the way, I watched a pair of RED-TAILED HAWKS moving to different trees along the edge of the field. The size difference between the larger female and male was really noticeable when they were side by side. I passed a BELTED KINGFISHER on my way back. There were numerous BLACK-CAPPED CHICKADEES and DOWNY WOODPECKERS pecking at the hollow weed canes in the field. I also had a nice view of a HAIRY WOODPECKER in a larger tree. There were plenty of other birds around as well including SWAMP & TREE SPARROWS.
I took a quick ride down to the Indian Hill Avenue Fireman's grounds on the way home. I wanted to see if I could find a Bald Eagle but had no luck. What I did see though was an impressive 32 COMMON MERGANSERS clustered together in the open water. There was also a couple of GREATER BLACK-BACKED GULLS hanging around the area.

Later in the day I took a brisk walk through the Portland Riverfront trail area. There is a short path that cuts through the woods to connect the chip trail to the main trail. I found another HERMIT THRUSH in this area. DURING the summer I had a really good view of a WOOD THRUSH in the same location. Overall, the area was dominated by numerous WHITE-THROATED SPARROWS and AMERICAN ROBINS. Plenty of CAROLINA WRENS around as well.
I plan to post descriptions of all of the above mentioned birding locations in the future.
Posted by Larry at 6:41:00 PM