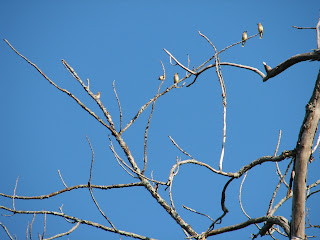 The title about sums up my birding adventures for last week. Let's start with the Cedar Waxwings. I've been seeing a lot of Cedar Waxwings all along the Connecticut River in Portland lately. Unfortunately, they don't seem to want to come anywhere near me. What's up with these birds? Come a little bit closer so that I can take a picture!

I had asked the farmer in charge of haying some of the local fields to leave a portion of them uncut. He did as I requested, and it seems to have paid dividends. I saw a few Bobolinks right down the road from my house. The male and female both have the same yellowish color this time of the year. One Bobolink that I observed must have been a male. It had a few black blotches on it's body. There was also a Cooper's Hawk hunting on the main riverfront trail-It flew before I could lift the camera. I saw an adult Bald Eagle near the fairgrounds. I've seen several Indigo Buntings along the river as well. I've also had a Red-breasted Nuthatch at my feeder and a Blue-gray Gnatcatcher(first time) in my yard. 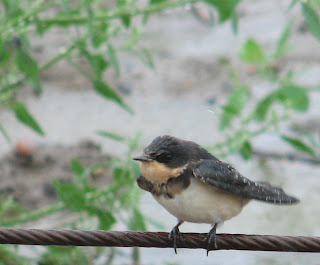 I've been checking the farm fields at Rocky Hill Meadows lately too.This little Barn Swallow was catching some droplets during a rain shower last week. I usually try to visit after it rains, hoping to see some shorebirds gathering near the puddles and torn up sod. So far, I've only seen Least Sandpipers, Killdeer, and one suspected Pectoral Sandpiper at this spot.

I visited a wildlife refuge in West Granby Saturday. I had seen the sign for it when I had passed by it during work. I'm always curious when I see signs like that.I know enough that birds and wildlife don't read the signs. It's not as though they're going to stay in a certain portion of woods just because it has been designated for them. Nevertheless, I like checking out places like this one. It had lots of pine trees throughout the trails, along with a few open swampy areas.The sound of my normally noisy footsteps were nicely muffled by a thick bed of pine needles beneath my shoes. I heard little chip notes in the trees. It turned out to be Pine Warblers.There really didn't seem to be many birds around. It was a very windy day. It felt like Fall, which is just fine with me.I had a nice eye level view of a Veery. The bird sat on a branch looking at me so silently before disappearing to the forest understory.There was a pair of Red-shouldered Hawks working their way through the area. They were noisy as could be- Keee-yur Keee-yur keee-yur they called as they moved through the woods. 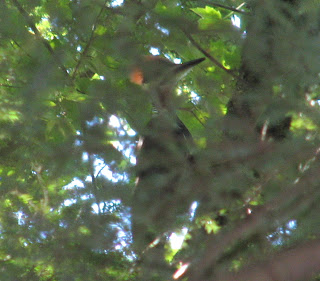 I was heading back to my truck when I hear what sounded like someone hitting a tree with a hammer. I suspected that I was probably hearing Pileated Woodpeckers. What happened next was totally unexpected. Two Pileated Woodpeckers landed in a tree just 10 feet directly above my head. I did not move from that spot for the next 10 minutes. They were hammering away on opposite sides of the same tree. Wood chips were literally landing on top of my head. Let me tell you, these birds can chisel out some serious chips! My hope was, that they would move in to a position where I could get a decent photo, but it never happened. The above photo was all I could get. Shortly after, they flew way off in to the distance. I've been close to Pileated Woodpeckers before when they've visited suet feeders, but this was much more exciting. Seeing birds at a feeder is nice, but there's something special about seeing them in their natural surroundings.

LOL, I have so many of these birds be camera shy also! Love this post, keep up the great work!

I'd like to see one bad photo you've taken-I've never seen one!

with the few thousand pictures on flickr that I have, I probably have around 30,000 in my computer that are so so and not publishable. But thanks for your kind words!

Wow! You take a lot of pictures.

The heat here has pretty much kept everyone at bay, and all I see these days are house finches and doves. Looking forward to cooler temps. Cool that you got to see the Pileateds!

I have seen or heard few birds along the trails the last couple of weeks. There are many cedar waxwings and the chickadees are very vocal. I wonder how many birds have packed up and left Ontario already?

Larry,
You've seen some good if uncooperative birds! But isn't both the frustration and joy of birding. Just like a box a chocholates, you never know what you're going to get.
Vern

Cedar Waxwings are one of my favorite birds. I love that baby bard swallow, too!

I agree with your preference of seeing the birds in the natural state. Feeder birds are fun but right now - they're scarce! Some days, I'll see less frequent visitors all at once - nuthatches, titmice, brown thrashers. But I have the regulars most of the time.

Natural is my preference also.

Cedar Waxwings are a strange lot. Sometimes they are so far away from you that binocs are needed. Other times you can nearly walk right up to them.

My wife and I had Cedar Waxwing fledglings land beside us this weekend. Not more than 5 feet away on a fence. Sharon talked to them and they just looked at her. It was fun!

Oh the thrill of wood shavings on your head! How cool is that?!

I love the little swallow on the fence wire.

And, yes - there is something so neat about walking on pine needles.

You're sure getting some nice birds, Larry.

Jayne-Relief is on it's way!

Vern(or should I call you Forrest?)
I love the unpredictability-that's the joy!

Mary-I never get tired of seeing feeder birds, but birding in the wild is a whole different ballgame.

John-Great experience with the Waxwings! It's been a couple of years since one landed close to me.

Cathy-I really do like walking on pine needles-it sure beats walking though sand or snow!

That was a fun post Larry. I'm glad you were able to see and share so many birds, but the Pileateds were the best! Do you think the one you have a picture of is a Juvenile? Chips on your head....now that's what birding is all about for me!