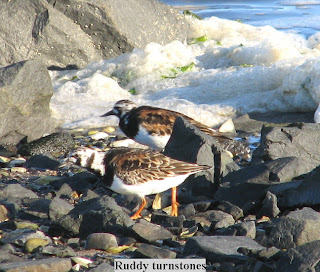 My destination for this morning was Sandy Point in West Haven. I was here about a year ago when I received an introductory crash course on shore birds from one of my fellow Audubon members (thanks Fran). What makes Sandy Point special is that you you can get a close up view of some of the shorebirds here. I decided to leave my bargain scope behind, and just use binoculars. I picked the perfect day. The tide was low but coming in early. As the tide comes in, the shorebirds come in with them. It was also cool and sunny. Very nice indeed. 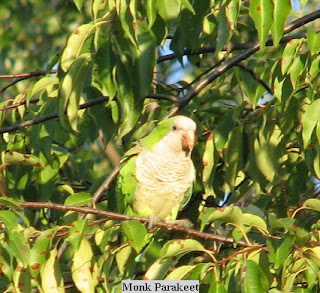 I arrived at 6:30 am, and was delighted to find that I was the first one there. The first birds I encountered on the way in were not shorebirds at all. This is a photo of one out of a group of about 20 Monk Parakeets. I will say that they are pretty noisy birds-"Polly Want A Cracker?"As I stated in another post, some of these birds have been euthanized because they build too many giant nests in unwanted areas (like the top of telephone poles). I'm not sure what to make of that issue. 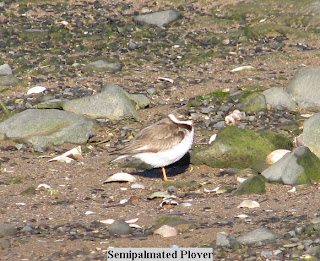 As I walked out to the point, there were a number of Plovers within close view. Most of them were Semipalmated Plovers. They have some similarities to a Killdeer but have only a single dark breastband compared to tow on the Killdeer.They are also smaller, and have yellowish legs-(Killdeer have pinkish legs). I also saw Piping Plover which are very light in color, and only a partial breastband-(I'm looking over, a Piping Plover-which I overlooked before)-.There were a number of Black-bellied Plovers as well which can be confusing because their plumage color goes through many stages. Some of the other birds that I saw were: Ruddy Turnstones, American Oystercatchers, Sanderlings, Semipalmated Sandpipers, and Spotted Sandpipers. I spent a lot of time looking at individual birds, so that I really didn't build up a big species list. 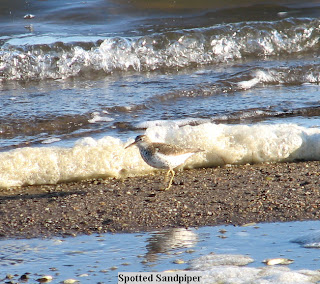 While I am not very confident with my ability to identify shorebirds, I was pleased to know that I'm not completely clueless as I was last year. Over time, I'm sure that I my shorebirding skills will eventually improve. 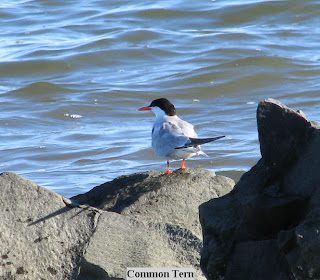 This is the first year that I've looked at Terns through binoculars. So far, I've only identified Common Terns . I don't think the title common fits them. They're actually very elegant looking birds. I am looking forward to seeing other species of Tern in the future.

After spending a couple of hours watching birds, I saw a group of about 10 birders approach. Each with their own spotting scope. They waved politely as they passed by, but didn't seem interested in making conversation. I was hoping that I could pick up some tips from some of the more experienced birders, but decided this was not the appropriate time. As I headed back, I realized that the tide had come up to the point that I wouldn't be able to avoid getting my feet wet. Oh well, it was worth it anyway. I ran in to a few more birders on the way out. One of them was an 80 year old gentleman that I had run into a few times in the past (god bless him-he's still going stronger than ever). I chatted with them about what I had seen, and they shared some information about the shorebirds in the area with me. Shorebirding still isn't my preferred type of birding, but I think it may be growing on me just a little bit.

My first reaction to gulls and shore birds is "I can't do it". I have zero confidence and feel very intimidated just thinking about them. One of these days I'll just have to dive in, so to speak and make an effort. You make it seem so simple.

Lynne-I think it may be difficult because we're just not used to identifying them.Like anything else, I think you have to learn the easy ones, and then learn a little bit at a time.-I'ts going to take a long time before I'm comfortable with these birds.-

I would love birding at the shore, and wish I lived near the ocean. We went to Lake Erie today, 2 hours away, and when we got there, it was pouring rain. Oh well, saw the usual ring-billed and herring gulls!
ruth

So many wonderful birds that you found! I just love those Ruddy Turnstone photos and Monk Parakeet! Both would be lifers for sure!

Hey Larry, you're so fortunate to live near an area where you can see all the different shorebirds! I'm glad you got a chance to go and take all those good pictures to share with us.

As someone who grew up 20 minutes from the ocean and now lives well inland I'm a little envious of you!
Some great birds!
Vern

I agree with Lynne... I'd be feeling so inadequate to try and ID them all! You do make it seem so easy Larry. Glad it was a good day despite the birders who didn't want to share any info.

You're lucky to be near the shore. I used to live 20 minutes away from the Delaware Bay and 30 minutes from the Atlantic. I really miss it, being so far inland.

Learning shorebirds will be like learning my backyard birds. I'd have my field guide open all the time!

I think you are enjoying your new finds. What a great Monk Parakeet! Keep it up!

If I were walking along the shore today and saw a group of birders with scopes and such, I'd probably smile and nod and keep going. I'd be intimidated, too.

Those photos are gorgeous. I've gained a bit of confidence over the years in iding these birds, but oh! those LBJ's!

Thank you, Larry. I've learned a lot from this post. Beautiful photos too!

Ruth-I guess that I shouldn't take it for granted that i live within driving distance of the shore.
Tom-You get to see birds so close-up.-That's kind of cool that I've seen a few birds that you haven't.
Jayne-They would have shared info if I approached them but I sensed they were on a mission that I didn't want to disrupt.
Mary-I learned that there are actually a lmited number of shorebirds that can be seen in a given area at a given time-It's not as bad as you might think.
Cathy-So you're a shorebird pro eh-
You probably know your LBJ's pretty well too.
Patrice-Glad you got something out of the post-thanks.

We have a lot of Monk Parakeets here in the south side of Chicago. I fear they are going to turn into one of those introduced pests like rabbits in Australia or starlings in the US. We'll see.

Sarala-We've had some problems with them here, but they are more managable than Starlings.