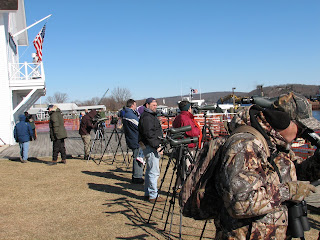 The above photo was taken Saturday morning at the Essex Town Dock in front of The Connecticut River Museum in Essex, CT. From this vantage point, there is a distant view of 3 eagles nests (it is no secret). The overall number of eagles seen during the festival is probably way down this year because there is too much open water on the river. This makes it less likely to see a concentration of eagles in one area. I did have a thrilling view of a light-morph Rough-legged Hawk that a Swarovski rep was able to line up in a scope for me. You could really see the dark patches on its wings and tail band as it hovered above the water much like a kestrel does. That was a life bird for me!

I didn't stay for some of the events that took place here, such as the live raptor demonstration. I was able to try out several binoculars. I thought that I had finally decided that Swarovski 8.5 x 42 EL were the best for me. Then I had to try that one last pair.-Zeiss 7x42 . It was the first time I ever tried Zeiss and boy, what a view! It is going to be a tough choice between those two when I can afford them. I did finally purchase a sturdy tripod and head. I cannot believe the difference! I have been struggling with a scope on a video camera tripod for two years. It was a foot too short for me and very difficult to adjust. This new one works like a dream and can be used for my camera, too. 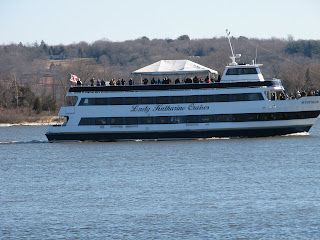 Here is one of the Lady Katherine Cruise ships. They were kind enough to donate the use of one of their ships for a school kids program on Friday called "Eagles in Flight". This is not the usual boat used for eagle tours. Eagle viewing boat tours can be booked through The Connecticut Audubon Society's Ecotravel.

After leaving the Essex Town Dock, I spent some time at some of the other eagle-watching locations. The Chester Ferry location seemed to be the most consistent place to see them. I had a nice view of an adult Bald Eagle perched on a branch eating a fish. I won't bore you with the photo which was much too distant to be of use. Some people took some nice digi-scoped photos but I am not equipped for that. Most of my fun came from locating eagles for other people that have never seen them before. Many of them were very impressed upon their first sighting, particularly some of the kids. Notice I said some; a few of the kids appeared to be less that interested (imagine that!). I actually saw a second Rough-legged Hawk here. This time it was a dark-morph, which still showed the tail band, but overall had less distinctive markings compared to the light-morph. 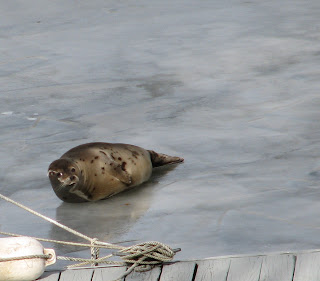 I was a bit surprised to see this seal taking a nap on the ice. It was at a marina near the East Haddam Bridge. Apparently, it has been there for a few days. I didn't know that seals swam up the Connecticut River. I don't know much about seals at all. The only ones I've seen have been in a tank. What kind of Seal is this? 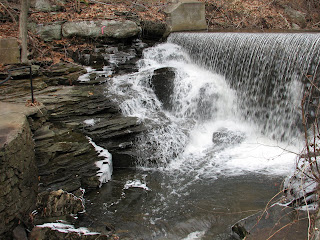 After leaving the area near the East Haddam Bridge, I took a wrong turn that led me to this scenic waterfall that I've never noticed before.
I was mostly focused on the events surrounding the Eagle Fest this weekend but I did capture this short video of Ring-necked Ducks. You might as well turn the volume down when you play it because there is traffic noise in the background.
"Where are you guys going?" "Is it something I said?"
-
Although there weren't the usual number of eagles in the area this weekend, The Eagle Fest is still a fun event. There was other events in the surrounding towns including a chili cookoff, chowder cookoff, and an ice sculpture event. I really like visiting this part of Connecticut. I came across something very unusual when driving along the back roads of Killingworth. I will tell you about it on Wednesday.
-
How was your weekend? Did you see any interesting birds, plants, or animals?
Posted by Larry at 2:21:00 PM

Alas, I spent much of the weekend in a conference room in downtown Chicago. I had to be there, but the eagle fest would have been much more fun!

I was able to get out yesterday, but today is a freezing rain storm and tomorrow a snow storm is expected. It is hard to go birding this month. Thanks for sharing what you saw this day.

Rough-legged Hawk would be a great bird and would love to have joined you! That Harbor Seal is a cuttie!

Great blog today and it's nice that I was able to visit the festival via your blog. My mother called me to remind me of the Eagle Festival in Essex, but we didn't make it down that way. It looks like we missed a great day. Congratulations on the Roughie Hawk! And the SEAL!!! WOW! I've heard of harbor seals getting all the way up to Hartford. (I think this is a harbor seal.)

Yesterday, I saw a Red Tail that was very close and allowed me to take a gazillion pictures. I think I could have walked right up to it and it would have just stayed in place. I also saw a Bald Eagle soaring over in Southbury, but it was very far away. It wasn't one of the scheduled days for visiting the Shepaug Dam, but we were in that general vicinity driving around. We also saw a lot of Common Mergansers.

What a great event! I've only seen a Bald Eagle once (at a raptor center). Oooo, I would have loved to see that seal. Your video of the ring-necks is awesome, in flight, no doubt!

You are talking about way too much technology for this lady who has a point & shoot camera and a new pair of Eagle Optics. That's all I have. Tee-hee.

I participated in the GBBC this weekend and submitted five times. Other than a damned cat and a Cooper's hawk at the feeders, it went well :o)

wren-I guess we all have things that we have to do when their are other things we would prefer to be doing.

ruth-You've had some rough weather recently.I'll bet you'll be looking forward to spring.

monarch-What made it great was seeing it hover in the scope.-

Sandpiper-I'll have to check your blog tonight to see if you posted those Red-tail photos.

Mary-I'm a point and shooter right now too.-That cat may have affected your results.-I don't think I'm patient enough to count yard birds-except maybe in the summer when I like to lounge outside.-good for you!

Will have to check out the Zeiss brand... I am forever in search of a better pair of binocs. :c) Sounds like lots of extra fringe benefits while at the Eagle watch!

Hi Larry,
Looks like you had great weather for your Eagle fest weekend. I was at a birding fest in Northern Minnesota too. We saw a couple of eagles and also several HUGE eagle nests.
One fellow let me peak through his super-duper spotting scope and WOW, what a beautifully clear and brilliant view I saw of the Northern Hawk Owl. I'm guessing a scope like that is probably a couple month's pay for me!
One woman brought her teen-age daughter along on the trip....poor girl, she was actually more interested in doing her homework on the bus than getting out to see birds! Hopefully she'll grow out of that in a few years....

Hi Larry, I'm jealous- that looked like a great event on Saturday! I really should start getting involved with local groups. I have one thing on my radar coming up in March that I'll be blogging about.

And yes, that's a harbor seal my boyfriend confirmed.

As for me, I did a little birding while jogging along the Charles Saturday but didn't bring my camera or stop at all. I saw the resident Great Blue Heron and what I believed to be a Common Redpoll based on the way he was hopping around and that he was alone.

Awesome on your new tripod. I've got to get one, too. Unfortunately I don't think they make a digiscope for my camera--I'll have to look into it at some point. Very cool on the seal! I've never seen one outside of a zoo. <:(
Had a good weekend, thanks. Counted birds for the GBBC. Nothing "new," not that I don't enjoy the "old!"

jayne-The Eagle watch is my favorite place to try out optics.
I don't know about other Zeiss products-I only know that the 7x42 were impressive.-Some birders would not go with that low of a magnification though-everyone's different.

ruthiej-Northern Hawk Owl-cool! I know minnesota has a lot more eagles than CT-it's probably not much of a big deal seeing them in Minnesota.-The nests are really neat to look at though-they're gigantic up close.

birdinggirl-thank your boyfriend for the confirmation.-getting involved with groups adds a little dimension to your birding.

lana-to digiscope I guess you just attach your camera to a spotting scope.-The 1-3x cameras work better for it than a high zoom camera.-I'm not ready for digiscoping yet anyway.-Maybe next year.-Good job with the count.

Congratualtions of the Lifer Rough-Legged Hawk, they are a nice bird!
Tough decison on the Binos, hugh? For many folks including yours truly, its even tougher to come up with the $$$! I often wonder how much difference it makes. Oh I know the top end of things are far superior optics, but will you see any more birds by laying out $1,500 or more? I know with my scope it paid to upgrade to a "mid-priced" model from the bargain basement one I had...Oh well, done rambling, hope you can decide on the brand you want and that the $$$ comes your way!
Vern

Larry, what a great weekend. Congrats on the roughie! I'm so glad you saw it kiting! The first time I saw that behavior was at Farmington Bay in Utah. It's amazing a bird that big can hover like that! I'd only seen kestrels do it before. Good luck on choosing new binocs. I just bought a pair of Vortex 8 X 42 Diamondbacks from Tucson Audubon at Christmastime, but I have my eye on a pair of Leupold Katmi that cost about $250 more. They're not up in the range of the ones you are talking about, but I am progressing slowly. I think a scope may be the next big purchase, but a small pair of good binocs is best for me to go tramping around in the underbrush!

Pa-birder-thanks-I would agree that you probably don't see more birds with fancy bins.-You may however enjoy the view more of the ones you do see.-that's the part that would interst me-but it is a luxury not a necessity.

I checked out the vortex and thought they were very good-their reasonably priced scopes were also very good.-I am in no hurry to buy top notch bins-I enjoy looking though them but don't feel a need to buy them right away-some day I probably will.