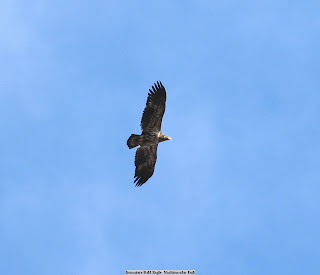 Eight birders met at Machimoudus Park in East Haddam on Saturday for a Mattabeseck Audubon Society field trip. It was a sunny morning with temperatures in the 40's. This park features a trail that takes you through woodlands with a splendid view of the Salmon River Cove from the top of a hill. It offers a good vantage point from which to observe Bald Eagles in flight. One immature Bald Eagle flew directly over our heads and hovered for a few seconds as it took advantage of an updraft. We saw a total of five at Machimoudus Saturday. It's hard to believe that it was not that long ago that eagles were rarely seen in Connecticut.

There are many more eagles in Connecticut during the winter. As the waters freeze north of us, many travel south along the Connecticut River looking for open water. This open water allows for them to search for their primary meals, which is fish. I have also observed them eating ducks and other animals on occasion. If you are interested in view Bald Eagles on the Connecticut River, your best bet is to make stops at the Chester Ferry, Deep River Landing, and the Essex Town Dock. They are all within close proximity of each other. If you stop at all three locations, chances are you will see your share of Bald Eagles. Other promising areas from which to search include Salmon River Boat Launch, Haddam Meadows, The Goodspeed Opera House parking lot, and the former Camelot Cruise parking lot on the opposite side of the river. If there are no eagles flying, you can try to spot them perched in trees along the banks of the river. If it is an adult, the white head will give it away. 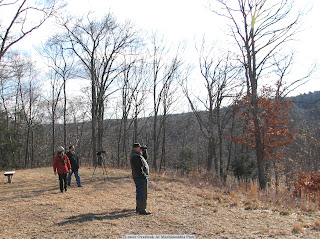 We moved along at an extremely casual pace on this day. When we saw a bird or birds that interested us, we spent a lot of time watching them before moving on. I would say that we were more birdwatchers on this day than we were birders. It was a nice change of pace from January when the main focus was adding birds to a list. We saw a total of 28 species, which is actually more than what I would have expected at this park during this time of the year. We saw at least a dozen Eastern Bluebirds during the trip. The brilliant blue color of the males really showed up well on this brightly lit day. One couple were delighted to get their first view of Cedar Waxwings. Do you remember the first time you saw a Cedar Waxwing? Other notable birds included Hermit Thrush, Brown Creeper, Great Blue Heron, and numerous Golden-crowned Kinglets. The sound of the kinglets seemed to be coming from every direction and the Hermit Thrush stared right at us while flicking its wings and bobbing its tail. 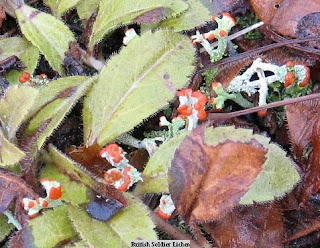 The field trip leader also pointed out various plants and fungi along the way. This tiny British Soldier Lichen (seen above) displayed a nice touch of red on a winter day. I hope to learn a little bit more about plants and trees this year.
Here are some new birding blogs that I've recently added to my blogroll:
Tom Pirro has a blog called Birding North Central Massachusetts And Beyond. He does some serious birding in his area but he doesn't mind venturing out into the woods for the sake of exploration, even if it means that he will see fewer species. I like that. I see that he has recently seen a Bohemian Waxwing which has been on my list of birds I'd like to see for a while now.
Sycamore Canyon is by "Kathiebirds" of Arizona. This blog has very descriptive, well written accounts of Kathie's birding adventures. There are very colorful photos of species that I don't get to see around here, such as Roadrunners and Vermillion Flycatchers.
The Birdcouple-This blog features the birding experiences of a husband and wife team. I have found several of their posts to be very informative including this one.
When you get a chance, check out these excellent birding blogs.
Posted by Larry at 11:36:00 PM

Sounds like you all had a very relaxing and fun day Larry. Thanks for the new links to check out. :c)

I love Cedar Waxwings, I remember when my son saw one for the first time on a cold winter hike. They were attacking berries and he got a close look at them!

Sycamore Canyon is now new to our blogroll thanks so much! Great posting as always!

I am envious of your outing. However, on Sunday my daughter and I watched 2 immature Bald Eagles right above us as they attempted to fish in the river. This is my 3rd sighting this month for birds I had never seen in the wild before. Your picture is much better than mine.

Larry, I love that photo of the lichen. The beauty of nature never ceases to astound me. I actually saw my first cedar waxwing at Mashmoquet State Park in CT. It was over 25 years ago and I still remember it. Thanks for the plug about my Blog. I have found so many nice Blogs by coming to your site. I love how you try to engage everyone and make your blog interactive. Keep up the good work. BTW, your Blog is a window on the world where I grew up!

Another wonderful field trip! Yes, I remember my first Cedar Waxwings - almost a year ago this month. They must have been thrilled!

I've been enjoying Sycamore Canyon. Now I have a few others to check out!

I always was excited when we had field trips as a kid! Now days I get even more excited when I hear field tirp! WOW, what a great day you had!

I've never seen a Cedar Waxwing. I don't know if they live in my neck of the woods, but I will find out. They are handsome!

Sounds like a wonderful time. Thanks for sharing the other blogs!

When I was a young boy, perhaps 5 or 6, we ended (my brother and I) up catching a Cedar Waxwing, or found a young bird on the ground. We didn't know any better back then and my folks weren't really outdoors people, so we kept it for a few days. It would fly around the basement when we'd let out of its cage. If I recall, we tried to feed it berries and it had a tough time to swallow them, insect would've probably been better for a young waxwing. Unfortunately, it didn't last too long and died. Well of course now, I know we saved the bird from nothing.
We also used to set up cages with bread or birdseed inside, leave the door open with a stick holding it up and string attached....well you get the idea. My brother and I and cusins would patently wait for the birds to arrive. My cousin Susan often times would scream "there they are" and scare off the birds! We'd usually catch some House Sparrows (once Susan was "calmed down") and let them go a few minutes after we captured them.
God forbid we catch a Blue Jay, it happened a few times. These high strung birds would bash themselves against the side of cage until a towel was put over the cage to calm them. Like the House Sparrows, we'd let the Jays go right way. We did a lot of stuff that wasn't "by the book" but it helped me develope an interst in the outdoors! Also back in the 60's Ornithologist still collected birds too...so I guess maybe we weren't so bad after all. Those are fond memories, Larry I am glad you asked the question about the waxwing...Thank You.
Cheers
Tom

Veery-Good addition to your blogroll-It must have been a thrill for him to see Cedar Waxwings up close!

ruth-I've been watching eagles for a while now and never get tired of seeing them.-Glad you are now getting a chance to see them!

Kathiebirds-Thanks and your welcome! Mashmoquet State Park-that's where the Wolf's Den is-rumoured to be the place where Israel Putnam shot the last wolf in CT.

Mary-Just a year ago!-That is one of those birds that really makes an impression on you when you see it for the first time.

Monarch-No wonder you're such a nature pro-you've been doing this stuff since you've been a kid!

Patrice-I believe they are in you're range.-Try visiting a place where there are a lot of Cedar trees with berries or bushes/trees with other types of berries.-You've got to be a little lucky too though.

Tom-Thanks-that has to be one of the most interesting comments that I received in a post!-Too bad about that waxwing though.

It was unfortunate about the waxwing, my brother got very attached to waxwing ("sqeaky" I recalled its name on the commute home last night). He was devastated when he found "squeaky", "stiff as a board" in the bottom of the cage.

Thanks for the links. More to read!