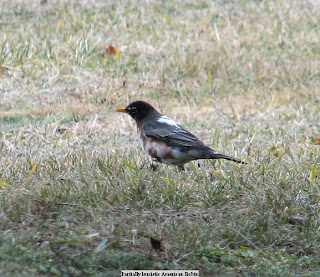 I had the day off from work Monday and decided to take a ride to Hammonasset State Park hoping to find a Western Tanager that has been reported there recently. Sunday night I was very dissappointed to see the New England Patriots season end in a Superbowl loss. Those of you who aren't fans of any particular sports team may not understand this but the game left me feeling emotionally drained. An exciting day of birding was just the cure to lift my spirits.

The first bird that caught my eye was a very strange looking American Robin. As you can see from the photo above this robin is partially leucistic. This is a genetic condition in which pigment cells for color are not present in parts of the skin or feathers. Have you ever seen albino or partially leucistic birds? 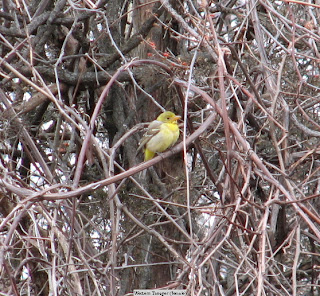 Here was the star of the show today. A Western Tanager is a pretty rare bird to see in Connecticut (also a lifer for me). Last time I checked, Connecticut is in the eastern part of the country, not to mention it's the middle of winter! Luckily for this bird, there is more than enough berries in the park for her to eat. There was a handful of us watching it this morning. We stayed fixed in one location for about an hour so that we could get more viewing opportunities. I was pleased to see that it was a bit more colorful than I expected. We did have a nice view of it but I didn't want to risk scaring it off so my photo had to be taken from a distance. We also observed three species of warblers from the same location. These included a Pine Warbler, Orange-crowned Warbler-(another lifer!), and a Yellow-rumped Warbler. Not a bad for day for warblers in February!
Other birds of note included Cedar Waxwings, Horned Lark, Lapland Longspur, Sharp-shinned Hawk, Fox Sparrows, and Red-breasted Nuthatch. When I was walking along a nature trail, I thought I heard the squeaky toy call of a Yellow-bellied Sapsucker. It turned out to be just the sound of my boots. I was also fooled when my lungs made whistling sounds as I exhaled cold air. I enjoy birding by ear, not by air! Oh well, nobody's perfect (not even the Patriots). I also saw all three of the Connecticut mimids today; Brown Thrasher, Gray Catbird, and Northern Mockingbird. The poor lighting made it a difficult day to take photos, so I decided to record the ever-accommodating Northern Mockingbird.
I'll leave you with this short video of a Northern Mockingbird plucking berries from a tree.
Can you name the bird heard in the background?

I couldn't ID that bird! But it was a great video!

Sorry about the Pats, Larry. I actually thought of you and a few others who I know are fans... Can't win them all, all of the time. A good day of birding will cure your disappointment, for sure!

I posted my January Bird Count. Inferior to most, but not too bad...

Sorry to hear you're a Pats fan. Great game, one for the ages!

Birding does help to lift my spirits also when I'm down.

Dido on the spell check, must be a blogger issue.

Larry,
Being a life long Pats fan, I feel your pain about the Superbowl. I had 2 friends who made a birding trip last week up to Massachusetts and on their way home happened to stumble upon your Western Tanager at an unplanned stopped at Hammonasset. Sometimes better lucky than good in birding just like football!
Vern

What's my western tanager doing in your state! Nice find and a fuel saver also as you didn't have to fly to AZ, CO,or UT to see it. We saw an awesome bird on Superbowl Sunday and I am currently adding photos to my blog but blogger keeps sending an error message. It's frustrating since I can't wait to share my photos! Gus and my son are both Giants fans, so there is joy in this household! However, my dauther-in-law is a Pats fan. She needed some time by herself after the game. She would understand your pain.

Hi there! Us sorry Packer fans were able to enjoy the Superbowl, but we definately know that the best cure for feeling down is a good birding experience!

Congrats on the lifers (in February! yee haw!) and is that a Robin in the background of the Mockingbird video?

We are being buried under some big snow today, so no birding for us! (they actually canceled classes at Northern Illinois University! that is RARE!)

Good birding to you!

Nice photo of the Tanager, there is also one coming to a feeder in Merrimac, Massachusetts. This bird had been frequenting feeding stations for over a month before word got out to the birding community. I was able to add it to my mass. list while scouting for the superbowl of birding. Unfortunately we didn't feel that locatioin fit into our superbowl route on "game day", so we skipped that area.

As a Pats fan, the loss was dissapointing, but I recall the 2002 superbowl when the Pats beat St. Louis. The media "pegged" the Rams as the best thing since "sliced bread" and that proved not to be the case....the Pats were wearing the "other shoe this year".

Even though I live in NJ, the true home of the Giants, I won't rub it in because I didn't care that much. It was a fun game to watch though. Congrats on the Tanager sighting. One shows up in NJ every few years.

Congrats on the tanager! I can't ID the background bird in your video...

Mary-Just glad that you participated!-The total is all relative to where you live and how much time you choose to put into it. Thanks for playing along.

pa-birder-That's pretty cool-friends of your's saw the same Tanager.-it's getting to be like that game six degrees of kevin Bacon.-Possibly the end of an era for the pats I'm afraid.-I know they'll still be competitive though.

Kathiebirds-I'll be looking forward to the bird you saw.-You're really seeing a lot of good stuff lately!

Tom-Yes that's true about your Pats/Rams analogy.-It felt eerily similar.-I just wish that Senator could have waited another day to make such a fuss.-Congrats to the Giants though-they earned it the hard way.

Patrick belardo-Being an all Boston Sports fan -I can't complain-we've had our taste of winning lately-maybe too much I guess.-Looking forward to baseball season now.-Sox and Yanks with all the young players should make for an exciting season.

Veery-yes-I'm sure that game must have been dissappointing for Packer fans.-Yes-it is a Robin-10 points for you!

Love the video and love watching the mockingbird gathering the berries! Also, very cool Tanager! Would have been a lifer for me and great to see some unusual bird in the area!

monarch-I'm surpised that would be a lifer for you with all that you capture in the nets.

WOW, a Western Tanager! Congratulations Larry! Very cool sighting for sure. Had a leucistic Titmouse once, but that's about it. Sorry about your Patriots. (Ducking away as she says, "Yea Eli!") ;c)

I was coming down Rt 9 South today and my 4 year old daughter was counting the red tail hawks as she always does.......

then we spotted a pair.....of BALD EAGLES!

I had NO IDEA that they are living right here in MIDDLETOWN CONNECTICUT....thought I was seeing things. I went online and googled...and your blog came up.

OK I think those eagles have turned us into bird watchers- found out about the Essex festival and we will be there.

Just thought I'd drop a note....will be reading through your blog to learn how.

I still can't believe it.

anonymous-That was the same reaction I had the first time I saw a Bald Eagle in CT. That led to my actively searching for eagles.-Eventually I started looking for other birds as well.-

If you read the February 2nd post it mentions places where you can view them.-Just bring some basic binoculars like 8x40 or 7x35 and start scanning the treeline on the opposite shore. Also look in the skies for big dark birds that glide with their wings stretched out flat.-If they are adults they'll have a white head and tail-but the younger ones are all dark.

People at the eagle fest will certainly help you out.-You can check out binoculars their too.

Thanks for taking the time to share your story on my blog!

Larry - I really enjoyed the Mocking Bird video. How neat. And yes, oh yes! How I love Robins!