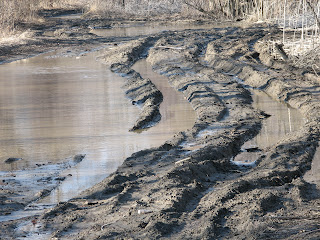 This weekend's birding was more like a series of unrelated events. My attempts at enjoying time outdoors seemed to be fragmented and lacking their usual natural flow. On Saturday, I took a walk with some Connecticut Audubon Members as they gave a tour of some of the properties they own in Wethersfield Meadows. Some of the people who joined the trip had binoculars but most didn't. It was okay to talk about birds on this walk but only to a certain extent. The main purpose of the trip was to give those who attended a history of the land parcels owned by the Connecticut Audubon. I pointed out a few birds to a some people who were interested but had to avoid being a distraction when the leaders of the trip were speaking. At one point I saw a Bald Eagle fly right over our heads but didn't say a word. It was an odd conflict of interest. I handed out a Hartford Audubon field trip schedule to 2 people who said they would like to get more involved with birding as a hobby. Birds seen on this walk included: Belted kingfisher, Bald Eagle, Great Blue heron, Red-bellied Woodpecker, Downy Woodpecker, Common Merganser, White-breasted Nuthatch, Tufted titmouse, and Red-tailed Hawk. There was one bird that was perched on a tall, dead tree that may have been a Pergrine but it was too distant to tell.


-------------------- click on play button to play gull video-----------------
On Sunday, I decided to search for Bald Eagles and other birds at stops along the lower Connecticut River. It was a beautiful sunny spring-like day on the drive down but it started to rain shortly after I arrived at Haddam Meadows. Species I saw there included one immature Bald Eagle and ten Common Goldeneye.

My next stop was at Chester Ferry. It was raining pretty good by the time I pulled in. I chatted a while with a friendly birder named Keith that I met there. He showed me a nice collection of bird photos including one of a Golden Eagle and another of a Scissor-tailed Flycatcher. He is interested in attending some Hartford Audubon trips. We saw a Great Cormorant perched on a snag in the river but neither of us saw any eagles here, which is unusual. It must have been the weather.

I drove a little further down the road to Deep River landing. there I saw some Mute Swans, 1 Bald Eagle, and some gulls. The Ring-billed Gull in the video seemed to be trying to tell me something-like "Go Home-it's just not your day." On my way back, I stopped at my favorite breakfast place in Tylerville. At least I knew that I could be successful eating breakfast--or so I thought. Would you believe they closed down the restaurant for not paying their taxes! 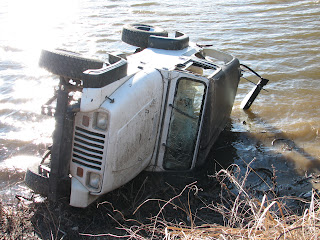 On Sunday afternoon, the rain stopped and the sun came out. I headed out to Wangunk Meadows in Portland to make one last attempt to do some birding before the weekend was over. Of course there were 40 mile per hour winds to contend with and it started to snow soon after I arrived. As I started to walk along the river trail, I looked down and saw this jeep turned on its side. Fortunately, no one was in it. People like to go four wheeling in the meadows but it looks like someone took too wide of a turn.

I didn't see a lot of birds during my walk but I enjoyed getting out for some fresh air. There were a few American Tree Sparrows, Northern Cardinals, chickadees, and woodpeckers around. The last bird that I saw was a Northern Harrier hunting in the fields. It was kind of distant but I made an attempt at getting some video. I call this bad hawk cinema. Yes, this weekend seemed to have a strange feel to it. I'm looking forward to next weekend in hopes that I can spend more time in the field.

sorry someone made a wrong turn! Ugg! Birding without binoc's? I must be honest, many times I go out on my own without them! It is fun listening to them at times and heavy taking all my equipment, camera, binoc's etc..

Larry, you crack me up. You might not think it was a great bird weekend, but I do!

"At one point I saw a Bald Eagle fly right over our heads but didn't say a word. It was an odd conflict of interest."

LOL! It would have been more than a conflict of interest for me. I would have embarrassed myself with glee :o)

Great videos. I especially liked the gull. He wanted you to throw him a french fry.

Isn't it nice that bald eagles have made such a come back that you actually can resist the impulse to jump up and down, shout, and point when one flies overhead?

I'm really glad I found your blog. It's great to hear about sightings in my own area. I would have HAD to scream, "LOOK!! AN EAGLE!!" lol

My sister has been seeing more bald eagles roosting in the trees by the East Haddam bridge. When I visit my family on the weekends, I've got to remember to come home that way instead of driving through Cobalt.

monarch-I could understand you not taking binoculars considering your line of work. I haven't had my fill of birds yet to go without binoculars.

Mary-I sort of pointed out a few birds and could tell that I was a bit of a distraction so by the time the eagle passed over I wasn't going to speak up again.

Sandpiper-that is a good spot to see eagles.-Also Great Cormorants and some ducks too.

Yikes! I thought you were going to say your jeep flipped in the mud!

There have been a lot of eagle reports in Ohio this year. Almost twice as many as last!

nina-I suppose that would have made for a more exciting post but I don't own a Jeep.-Go find those eagles!

You're a better person than I...I definitely would've pointed out the eagle. (Added you to my blogroll, if you don't mind.)

Larry,
Love your blog and you do keep us laughing! Don't forget your wife on Cupid Day!

Ahh... Spring and migrants can't be too far away!

There's a little "thank you" on my blog tonight. Check it out.

Bummer Larry! I've been on similar outings like your Saturday trip where Birding was not the focus of the group and it can be a killer for fully addicted birding types. Outside and not birding?! How can these folks call themselves alive?! Don't worry, the GBBC is this weekend, and even though your not oridnarily a lister you can focus first and foremost on birds!
Vern

lana-I may have failed to mentioned that I pointed out a couple of them prior to that moment.-Great -thanks-I'll add you to mine as well.

Pa-birder-I sort of knew what I was getting in to.-It was still a nice walk and I don't regret it.-Just tough for me to be in a birding enviroment without focusing my attention on birds.

Larry, a soggy CT weekend? Let's see, how often does THAT happend? It'd dampen my spirits for sure. Perhaps we could name a bird after that upended jeep? We could call it a "Jeep Flipper". This bird would be well known for hanging out in muddy places. While it can be a variety of colors above, it would be well known for having a steel colored belly and rubbery black feet. A field mark would be the tendency to flip it's lid! Ha! I hope this weekend is much better!

Kathiebirds-You have quite the imagination Kathie!-Keep a lookout for my post on Wednsesday if I finish it in time.