Call Me Gullible When It Comes To Gulls

click to play
Last Friday, I had already decided that I was going to look for gulls the next day. The only ones I usually see are Ring-billed, Herring, Black-backed and the occasional Laughing Gull that hangs outside of the comedy club. My plan was to make an attempt to figure out the age of gulls based on their plumage and markings. On the same night, a report came across that a Slaty-backed Gull had been found at the Windsor Landfill. This would be the first confirmed record of one in Connecticut. A very skilled and determined birder named Nick Bonomo was the one who found it. I decided to take a ride the next morning to see if the gull was still around . 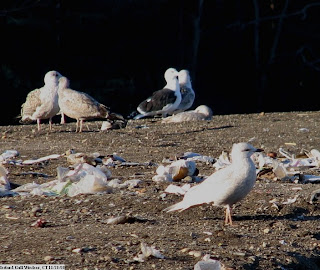 I arrived at the landfill as soon as it opened along with 20 other birders. Soon after we arrived, We saw this (1st winter?) Iceland Gull. 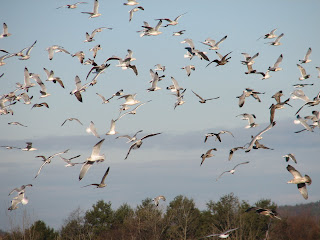 There must have been well over a thousand Gulls at the dump, probably more. I didn't take the time to count them. 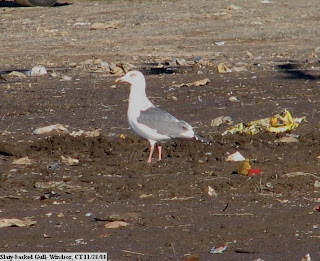 We found the bird we were looking for within the first half-hour that I was there. In all honesty, I don't know that I would have picked this gull out amongst the others that day if I were by myself. I guess I'll never know. Another birder who was knowledgeable about gulls found the slaty-backed for us. I had to see it a few times before I was able to clearly distinguish it from the other gulls. The photos I took of the bird of the bird came out poorly. You can see the Slaty-backed Gull does have very pink legs and somewhat of a pot belly. It also has black wing tips with white dots that you can see when the bird flies. Click on the link for Nick Bonomo's blog: Shorebirder to see a detailed description of the SB-Gull along with some great photos of the bird. It was fun to know that I was seeing the first confirmed Slaty-backed Gull in Connecticut. One birder from New Jersey told me that he had missed this particular gull on five previous attempts.
-
I watched gulls at the Windsor Landfill before heading off to Wethersfield Cove to have a look at what was hanging around there. I took notes, photos, and even made sketches of the gulls that I saw. I posted the photos on a bird identification website and sadly discovered that my assessment of the gulls ages were mostly wrong. A lot of them turned out to be "sub-adults according to other birders who had some experience with gulls ." In fairness to myself, I didn't even see sub-adult listed as one of the choices in my field guide. I'm thinking about purchasing a gull specific field guide to help me gain a little more knowledge on the subject. I saw a review by Mike of 10,000 Birds for a field guide called Gulls Of The Americas.
-
Does anyone have a recommendation for a field guide that specialize in gulls?
click to play
Here's a video of the Slaty-backed Gull in action. There was a lot of noise from the wind but you can also hear birders talking in the background, some of whom came from out of state just to see the Slaty-backed Gull.
Posted by Larry at 7:28:00 PM

Get the Peterson one, although it's not really a "field" guide.

Congrats on the great sighting. It'd be a lifer for me.

What is the bird i.d. site that you refer to? I could use something like that!

Patrick-I'm just looking for something that will better help me figure out the age of gulls that goes beyond a standard Sibley Field guide.

Susan-Cool-Another nice Connecticut blog! It's called Birdforum.-I should add it to my links.

Hi Larry,
After reading this post, I realized I'm not that much of a hardcore birder after all--at least where gulls are concerned. Here in landlocked SE MN, there just aren't many gulls around.

Congratulations on the Slaty-backed (and the Iceland)!

I second Patrick's recommendation of the Peterson guide to gulls. It has multiple photos of every plumage of every gull species found in the Americas, including hybrids. It is a little too big to take into the field, but it will definitely teach you how to age gulls.

By the way, I think "sub-adult" just means older than juvenile but younger than adult - so sub-adults would basically be second-cycle and third-cycle gulls.

Gee...I need to do some gull study..thanks for the info. I am just wondering what junk those birds are eating...cause i know there has got to be some pretty bad stuff in there...oh well...
nice to see the videos...thanks

Ruthiej-It seems you really need a good sized flock of gulls to improve your chances of finding something out of the ordinary.-Hardcore? My birding skills stink compared to some of these hardcore birders.

John-Thanks-but as I wrote-Nick Bonomo found the SB Gull.-I had a lot of fun looking for it though and it was fun being a part of the whole thing. Thanks for the clarification about the term sub-adult.-I stay right near my truck or even inside my truck where I would watch gulls so the large size of the book won't be a problem.-I am looking forward to checking this book out.-thanks

Dawn-Glad you liked the videos.-The food they're eating could be from a gourmet restaurant.Probably a little past the sell-by date though.

Hey..dont know if you have seen shorebirders shots of the same bird..
http://shorebirder.blogspot.com/
maybe you know each other maybe not..but thought i would pass this on..

dawn-Yes-thanks-Shorebirder is Nick Bonomo's new blog.He is the one who found the bird which was a great accomplishment!

Well up until recently, I thought a gull was a gull, a duck was a duck and a goose was a goose.

I started getting into birding recently and to my surprise, there are many different species of water birds I knew nothing about.

I frequent blogs of those much more experienced then myself and there will be a pots where they are really excited over a sighting of a bird they had never seen before. They post the picture and I think to myself, I just saw that bird last week at the park.

Of course it wasn't the bird at all, but many of the water birds still look so similar to me that I can't tell them apart. This is why I love going to these types of blogs because I am in awe at how knowledgeble the bloggers are.

Gulls are another category onto themself for me because they will always look the same to me. The ones I see at the beach look the same as the ones that come to my yard on occasion for peanut butter toast.

Larry- I try and I try, but my eyes still glaze over when I look hard at gulls. I do think their flight is graceful and flocks in the air are a beautiful thing, but...

Sorry- I guess no one will ever cal me a hard core birder. :)

Larry, dAwN pointed me to your video, very cool. Thanks for posting that! Also glad you got to see the bird.

Lynne-I've been pretty much the same Lynne but since their are large flocks of gulls not too far from me I decided to try a little harder. there's nothing wrong with just enjoying their beauty.

Nick-Oops-I just noticed I repeated myself.-Anyway-thanks for finding the gull and the other birds that you have reported.-I'm glad to see that you started your own blog. You find a good percentage of the rarer birds in Connecticut so this way we can keep an eye on what you've been up to.

Kallen305-learning new birds takes time but it's a lot of fun (but frustrating at times) when you're just getting sarted in birding.

Thanks! I will check out Birdforum. That's a good tip.

I wonder about your Laughing Gull at the comedy club...
The Niagara River is an important wintering area for many kinds of gulls. I admire the hardy birders who stand in the damp, icy cold above the falls to ID them.

Ruth-"I wonder about your Laughing Gull at the comedy club..."
Okay-so you caught me on that one.I did see one once on August 19 of 06 when The Connecticut Ornithological Society brought one to my attention. I try my best to stay in the truck when watching gulls although the dump stays a little warmer with all that steaming trash.

Susan-It is a good site. I often go there when I can't identify birds.-

Well that gull looked just like all the others to me. He probably had no clue he was the center of a big birding ruckus.

Larry, two must-haves for those looking to really learn gulls, including how to age them:
1) Gulls of the Americas by Howell and Dunn
and
2) Gulls of Europe, North America, and Asia by Olsen and Larsson (this one may be out of print and difficult to obtain)

Nick-I think that I will give Gulls of the Americas a try.-It looks as though the Peterson Guide is the one written by Howell and Dunn so that should narrow down my choices-thanks nick and to others who gave their recomendations.